Monitoring and Responding to Radicalisation Trends and Risks

Monitoring and Responding to Radicalisation Trends and Risks

The terrorist attacks in Paris from 2015 underscored the importance of a holistic policy approach to countering radicalisation that might lead to violence in Europe and beyond, and signaled the need for reassessment of the effectiveness of existing measures. The lack of evidence-based analyses of the factors and drivers of radicalisation to guide policy actions remains a major challenge to effectively confronting this complex problem at its roots.

In order to address the existing knowledge gap with regard to how and to what extent internationally observed radicalisation processes are manifested in Bulgaria and the region, and how they should be best monitored and tackled, the Center for the Study of Democracy organised on 8 December 2015 a roundtable discussion on Radicalisation in Southeast and Central Europe: Monitoring and Responding to Key Trends and Risks. The round table was attended by representatives of partner organisations from the Czech Republic and Greece, representatives of the Ministry of the Interior, the State Agency for National Security (SANS) and various embassies.

Ms. Rositsa Dzhekova, Coordinator of the Security Program at CSD, opened the round table by pointing at present challenges in understanding and countering radicalisation. A shift towards soft policy approaches has been observed across the EU, aimed at identifying and reversing the radicalisation process which often precedes the use of violence. Yet, in many member states decision-makers still lack the appropriate evidence to guide policy actions. Ms Dzhekova stressed the need for more empirical research on why, when and how individuals and groups become radicalised and what are the conditions driving some of them into violence. The Bulgarian government so far has been focussed on better equipping security agencies to monitor, prevent and respond to potential terrorist threats, especially since the terrorist act in Bourgas on 18 July 2012. Meanwhile, a new strategic approach with focus on prevention of radicalisation is also starting to emerge. Nevertheless, Ms Dzhekova highlighted the crucial importance of basing future policy decisions on rigorous monitoring and evaluations of radicalisation factors and risks.

Dr. Mila Mancheva, Senior Analyst from the Sociological Program of the CSD, presented the main findings of a study on radicalisation trends and threats in Bulgaria, Greece and the Czech Republic, focussing on Islamist radicalisation. Dr. Mancheva discussed the level of both external and home-grown threats of Islamist radicalisation. She elaborated on processes associated with the penetration of Salafi interpretations of Islam (in BG and EL) and the links to Jihadi groups of segments of immigrant Muslim population (in EL). She discussed the extent to which these might be approached as risk factors to Islamist radicalisation. Bulgaria and Greece have large old Muslim minorities, professesing moderate Hanafi Sunni Islam which acts as a protective factor against radicalisation. Yet, some symbolic support for radical Islamist ideas has been observed among some Roma communities in Bulgaria, who are often converts. In Greece, there is a big immigrant community and the country has a history of politically motivated Islamist violence. With regard to foreign fighters, it is telling that none of the countries have seen their natives join the fight in Syria. Nonetheless, all three countries serve as transit route for foreign fighters and instances of provision of logistical support to them are observed in BG and EL.
Dr. Mancheva stressed the need for more studies looking at what makes old Muslim communities resilient to adopting Salafi interpretations of Islam.

.Miroslav Mihaylov, Director of the National Counterterrorist Center at the State Agency for National Security, presented Bulgaria's emerging approach in countering radicalisation and terrorist threats. A national strategy and action plan on countering radicalisation and terrorism have been elaborated in 2015, reflecting the determination of the Bulgarian government to confront related threats not only through strengthening enforcement and control measures, but also through early prevention of radicalisation. Mr. Mihaylov underlined the essentiality of a multi-institutional approach involving the cooperation and exchange of information between authorities at the local and national level as well as between different stakeholders like police, social workers, teachers, civil society and communities. Among the envisioned measures are developing mechanisms to raise awareness of democratic values, stimulating intercultural and religious dialogue, and fostering critical thinking among youngsters.

Dr. Lindsay Clutterbuck, an independent expert on radicalisation and counter-terrorism, elaborated on certain behavioural patterns denoting the transition to violence. He presented findings from seven case studies of known violent jihadist attacks and conspiracies in the United Kingdom. He described the early phases of radicalisation where the individual becomes disenchanted and starts adopting radical views. The behavioural signs at this stage are vague and might not mean much and therefore taking action is difficult. Moving on to the final stages of radicalisation, behaviour becomes more visible and closer to the illegal spectrum and develops into a potential indicator of future intentions.
Dr. Clutterbuck noted that the UK has been developing effective mechanisms to uncover terrorist planning and preparation ever since the fight against IRA radicals. On the other hand, he confirmed that engagement of the social services is new in the United Kingdom as well and essential when it comes to intervention in the initial phases of radicalisation.

Ms. Ines von Behr, Senior Analyst in RAND Europe, elaborated on the challenges of measuring the effectiveness of counter and de-radicalisation programs. She underlined the fact that radicalisation is not a linear process and when designing intervention it is important to distinguish between attitudes on one hand and their behavioural manifestations on the other. Ms. von Behr described the five stages that ideally all counter-radicalisation interventions should include: needs assessment, intervention design, implementation, results and monitoring and evaluation. She further elaborated on the crucial issues which should be addressed to ensure successful intervention and facilitate effectiveness assessments. Intervention timing is key - when carried out too early it may serve as a trigger for radicalisation, but when carried out too late the chances of success diminish. Ms. von Behr pointed out the importance of methodology when it comes to the difficult task of estimating the effectiveness of interventions and preventive measures.

Ms Dzhekova, pointed out the lack of systematic collection of statistical data regarding different extremist crimes and perpetrators, which could serve for compiling regular situation reports. She further stressed the need to develop working methods in identifying, monitoring and evaluating radicalisation risks. A well-developed practical monitoring tool would ideally enable relevant stakeholders to use appropriate methods for analysis and observation of radicalisation phenomena and conduct a systematic risk identification and assessment of trends at local level. Explaining the wide range of drivers and factors of radicalisation, as well as its potential behavioural manifestations, Ms Dzhekova further introduced a system of risk indicators as the basis for designing a practical instrument for first line officers from police or other public bodies to identify and monitor risk signs.

Mr Georgi Ovnarski, expert on right-wing extremism from the State Agency for National Security, stressed the importance to engage other stakeholders like teachers, who are better placed to spot signs of radicalisation at an early stage since they work with young people. The police encounters individuals mostly in the context of dealing with criminal offences, when the process is usually in later stages and thus much more difficult to manage.

Ms Miglena Bogdanova, expert on religious extremism from the State Agency for National Security, added that once authorities are alerted of signs of risk behaviour, there needs to be an established response mechanism. Teachers and other frontline practitioners should not be left alone to deal with the problem. It should be clear what actions shall be taken and to whom the problem shall be referred. More institutions and community members should therefore be involved in order to bridge gaps between authorities and communities. Furthermore Ms Bogdanova underlined the fact that even if indicators are in place, intention still needs to be proven which is very difficult in practice.

Mr Jivko Dimitrov from the Ministry of the Interior confirmed the importance of monitoring radicalisation and the need for improvement of local level information collection. He expressed his belief that due to the constrained resources of the police, it is better for risk assessment to be carried out on a higher level first, so that identified localities of concern can then be targeted specifically. 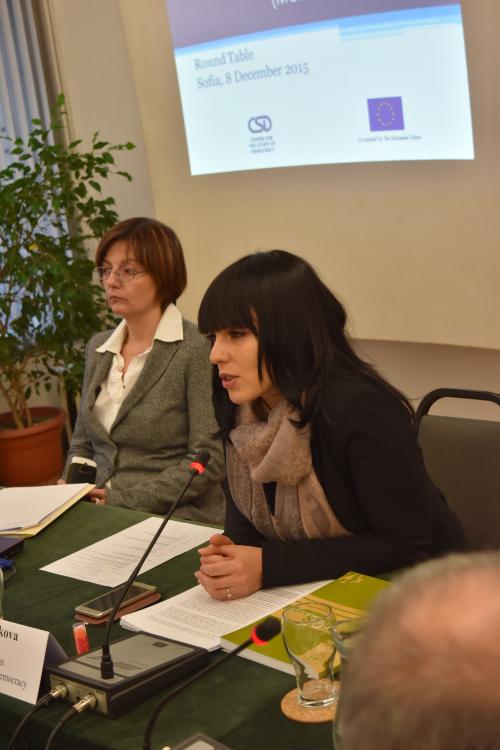 Ms Rositsa Dzhekova, Coordinator of the Security Program at CSD

Mr. Jivko Dimitrov, the Ministry of the Interior

Ms. Rositsa Dzhekova, Coordinator of the Security Program at CSD

Dr. Lindsay Clutterbuck, an independent expert on radicalisation and counter-terrorism

Dr. Lindsay Clutterbuck, an independent expert on radicalisation and counter-terrorism

Mr. Miroslav Mihaylov, Director of the National Counterterrorist Center at the State Agency for National Security

Dr. Mila Mancheva, Senior Analyst from the Sociological Program of the CSD