Meeting with representatives of the Chinese Association for International Understanding

Meeting with representatives of the Chinese Association for International Understanding

On October 31, 2006 the Center for the Study of Democracy hosted a meeting with representatives of the Chinese Association for International Understanding (CAIU). The meeting aimed to acquaint the participants with each other’s activities and to discuss opportunities for cooperation and sharing of information and resources.

Mr. Li Chengren, executive vice-president and Mr. Zhao Lei, assistant Secretary-General of the Chinese Association for International Understanding provided information about the organization’s history and goals. CAIU was founded in 1981 when the Chinese government started pro-market reforms and decided to open China to the world. The board of directors of CAIU comprises of 110 prominent members of society. The main goal of the organization is to promote China internationally and to acquaint China with other countries’ cultures. CAIU has established departments for Europe, America, Asia, and Australia. The association has good connections with many NGOs around the world and it is known for the cooperation with the UN in projects aimed at fighting poverty. Mr. Chengren extended an invitation to CSD representatives for further discussion of the possible cooperation in Beijing in 2007.

Dr. Ognian Shentov, CSD’s chairman, presented the history and outlined the activities of Center. Dr. Shentov pointed out that now, in the era of globalization, the role of non-state actors (NGOs) in the international relations has increased significantly. He gave an example of successful cooperation between Bulgaria and Great Britain that was facilitated by two NGOs - The Center for the Study of Democracy and the British Association for Central and Eastern Europe. In the early 1990s these NGOs organized round-tables with Bulgarian and British members of parliament, government representatives, NGOs, media and professional unions.

Mr. Boyko Todorov, Program Director at CSD, noted that both China and Bulgaria are located in regions with unstable neighbors, in which cross-border smuggling and migration are important challenges. Despite the difference in size, both countries face similar problems like corruption, the need for corporate governance reforms, etc. He asserted that the Center for the Study of Democracy is internationally renowned for its anti-corruption projects and could be of assistance to the Chinese government and non-government organizations in preparing adequate responses to corruption. 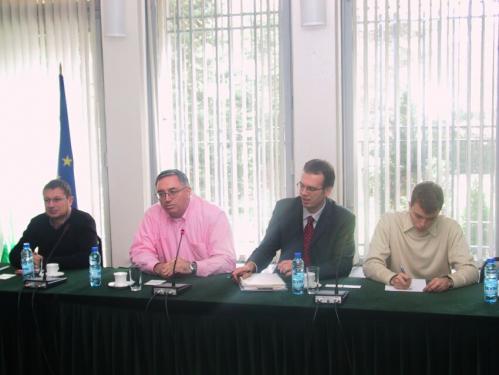 The Chinese participants in the meeting
Related