On March 11, 2015, the Centеr for the Study of Democracy, in partnership with the Media Program Southeast Europe of the Konrad Adenauer Foundation and the Open Society Foundations, held a conference on Media as an Instrument for State Capture.

Dr. Ognian Shentov, Chairman of the Board of the Center for the Study of Democracy, opened the discussion by pointing out that media influences the policy making process in the country and any hidden dependencies constitute a serious case of political corruption. Different sectors in different countries are captured by private and oligarchic interest to a varying degree, which creates major risks to national security. State capture, especially in the security sector, also influences our relations with NATO and the EU.

Mr. Christian Spahr, Head of the Media Southeast Europe Program of the Konrad Adenauer Foundation, emphasized the continuing deterioration of media freedom in Bulgaria. According to recent studies, every second journalist in Bulgaria has experienced pressure from business and/or political circles. This pressure demotivates journalists in their pursuit of quality coverage.

The US Ambassador to Bulgaria, Marcie Ries, underscored the importance of free media for the functioning of democracy. “In a democracy, media have a critical role to play in informing citizens and voters and in playing host to or even provoking honest debate on public policy. I think we can acknowledge that in Bulgaria, there is a problem in that in many cases, we don't know who owns the media and therefore, consumers can't have an informed opinion about the objectivity, or lack of it, of what they are reading” she said.

Dr. Maria Yordanova, Director of the Law Program of CSD, outlined the legal framework on media ownership. She claimed that while there are procedures for identification of media ownership, the results that they yield are unsatisfactory. The information provided is often insufficient and a number of mechanisms through which ownership can be obscured are not addressed by legislative measures. Social media, which are growing in importance, are left out as well. Therefore, there are serious gaps in the legislative framework, providing a fertile soil for corrupt practices. On the other hand, self-regulation of the sector is inadequate as evidenced by fragmented ethical codes.

Prof. Nelly Ognyanova from Sofia University noted that the lack of transparency in media is a systemic problem, akin to problems in other sectors, such as corruption in the judiciary. She elaborated on a couple of mechanisms used to evade regulations and to obscure real ownership. The use of ‘consultants’ who exercise the actual control over media renders them immune to regulatory oversight and prosecution. The sources of media financing are another important factor for transparency, and these sources often reveal hidden dependencies. For instance, some seemingly unrelated media might turn out to be debtors to the same bank. Similarly, significant state capture is evidenced by the allocation of state and EU funds to big PR companies. Prof. Ognyanova pointed out that the creation of a registry of all public funds allocated to media might be a possible solution. The unduly large influence through media concentration can be minimized through a permanent two-tier control system where the Commission for Protection of Competition would work together with the media sector regulator in providing a comprehensive measure for ensuring media pluralism.

Mr. Tihomir Bezlov, Senior Analyst at CSD, spoke about the need for a thorough analysis of the advertisement and marketing market, where significant funds are generated but it is unknown how they are distributed. He alluded to a dense network of PR and sociological agencies deployed in manipulating public opinion. Commercial interests often prevent unbiased reporting on the principle of “payment for silence”. Likewise, external influence can be detected with regard to the presentation of international events like the Ukraine crisis. Mr. Bezlov noted that due to the technological revolution it became difficult for traditional media to finance themselves independently.

Mr. Georgi Lozanov, Chairman of the Council for Electronic Media, argued that concentration of influence is more important than mere ownership - when looking at ownership alone, it is unlikely that one would detect monopolies in Bulgarian media. Addressing financing, Mr. Lozanov suggested a debate on the revival of a previously existing measure preventing certain categories of creditors from financing media outlets. He agreed that independence is a challenge in an era when media cannot generate enough revenues to cover their costs.

In the second panel, Dr. Alina Dobreva from the Centre for Media Pluralism and Media Freedom in Florence presented the results of a research measuring the risks for media independence in nine EU member states. Concentration of media ownership is characteristic for EU member states and no country is immune to this trend. In Bulgaria, however, the risks are more complex – there is a lack of clear assessment of concentration in ownership and influence and no civic or political control. Another problem is cross-stakeholder ownership: there are close links between owners, distributors and politicians (including regulators), while the state is the biggest player on the advertising market. Nevertheless, the issues of media pluralism and freedom are high on the EU agenda and the experience of countries like Bulgaria can be valuable in informing future EU policies.

Mr. Ognian Zlatev, Head of the European Commission Representation in Sofia, furthered the topic of EU measures. He pointed out that while there have been some tentative attempts to address media freedom and pluralism, member states as well as the industry itself are not willing to accept EU-wide rules. Thus, Bulgaria can look for assistance from other states with good record in media freedom but at this moment cannot expect a comprehensive European framework.

Mr. Christian Spahr compared the regulations in Germany where the legal framework is very strict, with France, where financing or ownership by business is permitted but is transparent, and with Bulgaria, where there are conflicts of interest and no transparency. Considering the low public trust in media independence, he noted that more solidarity is needed among journalists in strengthening self-regulation.

Mr. Aleksander Kashumov from the Program for Access to Information Foundation noted that some significant progress has been achieved in the last fifteen years, but a complicating factor is the existence of myriad different commissions applying different aspects of the legal framework.

Mr. Alexei Lazarov, from Capital newspaper, argued that not all media are equally affected. The lack of transparency in the sector is a symptom of the overall situation in the country, where corruption is widespread and the judicial system is in dire need of reform. Once these problems are addressed, the issue of media capture would be resolved too. 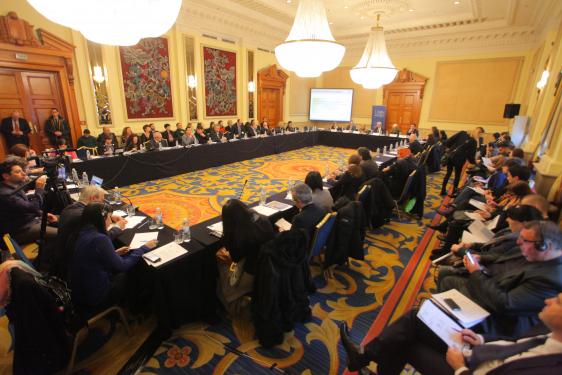 From left to right: Mr. Christian Spahr, Head of the Media Southeast Europe Program of the Konrad Adenauer Foundation, Ms. Marcie Ries, US ambassador to Bulgaria, Dr. Ognian Shentov, Chairman, Center for the Study of Democracy

From left to right: Dr. Maria Yordanova, Director of the Law Program of CSD, Mr. Christian Spahr, Head of the Media Southeast Europe Program of the Konrad Adenauer Foundation and Ms. Marcie Ries, US ambassador to Bulgaria

Mr. Aleksander Kashumov, the Program for Access to Information Foundation

Dr. Ognian Shentov, Chairman of the Board, Center for the Study of Democracy

Mr. Georgi Lozanov, Chairman of the Council for Electronic Media