Тhe political instrumentalization of media in Bulgaria and Southeast Europe is visible in a number of ways. This is the key conclusion reached at the conference under the topic of ‘Media and Political Influences’, co-organised by the Center for the Study of Democracy and Bulgaria’s Chairmanship of the Committee of Ministers of the Council of Europe on 16 May 2016. The event was attended by the Ambassadors of the Kingdom of Netherlands and of the Czech Republic to Bulgaria, representatives from the Council of Europe and national state institutions, NGOs, as well as researchers and journalists.

Dr Ognian Shentov, Chairman of the Center for the Study of Democracy, emphasized that media, including social media, are used increasingly in very cold and professional way to influence political process and there is a need for deeper understanding of these influences.

Ambassador Tom van Oorschot (the Netherlands is currently holding the Presidency of the Council of the EU) shared a concern about the global dimensions of media dependence from external forces, and highlighted the principle of free and impartial journalism as a cornerstone of healthy democracies not just in Europe, but across the world.

Mr Rumen Alexandrov, Deputy Minister of Foreign Affairs, identified the protection of media from external influences as one of the priorities of the Bulgarian chairmanship of the Council of Europe.

Mr Tihomir Bezlov, Senior Fellow at the Center for the Study of Democracy, presented an overview of the recent state of the media environment in Bulgaria in terms of ownership, revenue streams, and changes in the media market. Due to the shrinking advertising budgets (aggravated to a large extent by the global financial crisis), media are subject to increased vulnerability to political and business pressures. One of the major threats for media’s independence are the ‘political investments’ in print and TV, as well as the PR contracts with government agencies and with large business groups. Mr. Bezlov emphasized that tight control of media content in private media leaves very limited space for critical coverage and investigative journalism. Grounds for optimism can be seen in the growing importance of social networks as an alternative media. They present a unique chance for independent journalists to create media content and to get paid (through sharing a portion of the revenues generated by social networks), thus bypassing the traditional media outlets.

Dr Malgorzata Pek, Programme Officer in the Council of Europe’s Media and Internet Division, talked about the Council of Europe standards with regards to ensuring a pluralist media landscape, diversity of media content, inclusiveness in public service media, as well as media coverage of election campaigns. Drawing upon different policies and the relevant jurisprudence of the European Court of Human Rights, she underscored the need for more work in the area of developing specific guidelines and standard-setting proposals on the transparency of media ownership and internal editorial policies.

Dr Lyubomir Kutin, Senior Analyst at the Center for the Study of Democracy, presented the findings of two case studies on the (in)dependence of Bulgarian regional media and the coverage of local elections. The lack of independent local media is a trend with devastating implications for the regions of Bulgaria. The absence of critical/high-quality journalism affects not only the local public institutions; regional economic activity is also hindered by the void of independent media voices. The regional media do not disclose the sources of their income and public funding, especially during election periods. However, content analysis of the elections coverage indicates bias in favour of incumbent mayors and lack of critical or analytical publications. The role of regional media has been downgraded to a channel where various political groups can publish their press releases.

Prof. Katharine Sarikakis, Professor of Media Industries, Media Organisation and Media Governance at the Department of Communication in the University of Vienna, highlighted the role of the state in contributing to the shrinking of public communicative spaces and the erosion of confidence in media institutions in general, but especially when it comes to public broadcasting. By (re-)exerting control over public service media in Europe, the state has posed one of the key challenges to democratic development as it has been involved in different strategies for political engineering and interference with the functioning of public media. The risk to public service media is not to be underestimated, given that it sets the standards for employment, impartial debate, the flourishing of diversity and informed citizenry. Among the key threats for the autonomy and survival of effective public media, Prof Sarikakis listed the growing public budgets deficits in many countries across Europe (leading to shrinking financial contributions), as well as the intense administrative control over such types of public service journalism.

Mr Christian Spahr, Director of the Konrad Adenauer Foundation Media Program for South East Europe, provided an overview of the media environment in the region. Media in the region have become increasingly consolidated with fewer companies owned by a smaller group of people, most commonly members of the political elite or individual oligarchs. One of the intangible effects of the economic insecurity of media in Bulgaria and SEE has been the adoption of a form of self-censorship by journalists and editors. Indirect political control over the media is established inter alia through public advertising. The lack of solidarity within the journalist profession makes media particularly vulnerable to external pressure.

In the discussions that followed the presentations Mr. Ilian Vasilev, former ambassador to Russia, commented that in the new economy media outlets as a rule not generate profits but they are valued for their influence and the market position that they can sustain.

Mr Ivo Indjov (Institute of Modern Politics) reminded that not only private media but also the public TV, BNT, has been subject of external influence, for instance during the street protests against the Oresharski government (continuing to cover the protests long after they had lost their momentum).

A number of recommendations and specific approaches for change in the media environment were suggested: greater accountability of media funds, enforced transparency of ownership, enhanced public debate, and further media literacy education among citizens and professionals. 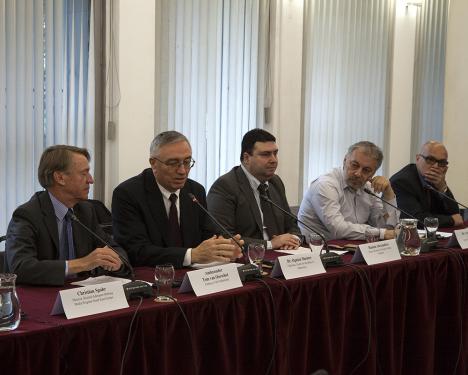 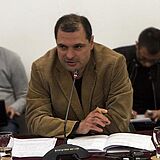 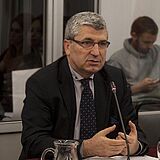 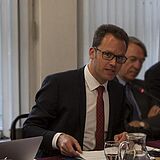 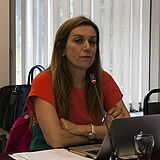 Prof. Katharine Sarikakis, Professor of Media Industries, Media Organisation and Media Governance at the Department of Communication in the University of Vienna 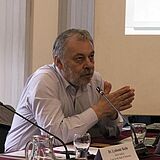 Dr Lyubomir Kutin, Senior Analyst at the Center for the Study of Democracy 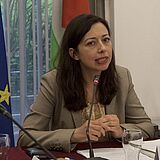 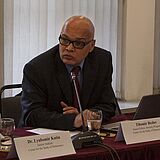 Mr Tihomir Bezlov, Senior Fellow at the Center for the Study of Democracy 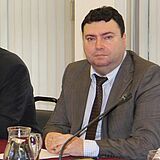 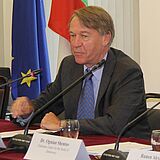 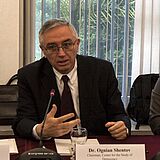 Dr Ognian Shentov, Chairman of the Board, Center for the Study of Democracy 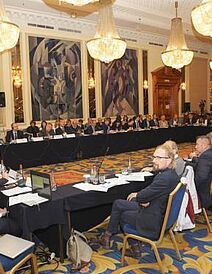