In the aftermath of the Russian invasion in Ukraine, it is imperative that European countries embark on a new energy policy pathway towards independence from fossil fuel imports. Unlocking the full potential of the European seas for offshore wind energy would play a key role in achieving the EU’s energy and climate security targets. It is only trrough the adoption of a specific and thorough legislative framework that the Bulgarian authorities could ensure that offshore wind power becomes an attaitable priority in the country’s long term strategic policy on energy security.

On 30 August 2022, CSD’s enaged a plethora of international and local experts and representatives of the executive and legislative branches of government in a discussion on the most appropriate way to ensure the decarbonisation targets for the next couple of decades. CSD’s latest publication “The Energy Security and Innovation Nexus: Towards a New Regulatory Framework for Offshore Wind Energy Development in Bulgaria” is the result of a comparative analysis of the extensive regulatory experience of four EU offshore market leaders and recent legislative developments in emerging markets.

Ambassador Jes Brogaard Nielsen of the Royal Danish Embassy, who co-hosted the event greated the audienc opened the floor by sharing the experience of Denmark touching upon the xisting opportunities for Bulgaria to unlock its offshore wind energy potential in the Black Sea. Dr. Mariya Trifonova, Research Fellow at CSD, commented on the lack of legislation being one of the major bottlenecks and discussed that the proposed regulatory framework would maximise the social and economic development of the sector. Four key points of Bulgaria’s offshore wind energy framework were discussed by Victoria Kerelska, Head of Advocacy & Messaging at WindEurope. She reiterated the need for setting concrete targets, an auctions framework, adequate support mechanisms and regional cooperation.

Benoit Bizet, Climate and Energy Attaché, Royal Danish Embassy in France, joined the discussion by elaborating on Denmark’s path toward climate neutrality using offshore wind energy and highlighted the importance of government support in developing the industry. The experience of Greece was presented by Vassilis Triantafyllos, Special Advisor at the Hellenic Ministry of Environment and Energy, who emphasised the similarities between the current regulatory framework of Greece and CSD’s policy recommendations. Mariano Gonzalez Serrano, Senior Energy Specialist for the World Bank, commented on the Bank’s consistent efforts to develop offshore wind energy in new markets and the need for a coordinated approach.

Following the conclusion of the expert panel, Atanas Pekanov, Deputy Prime Minister for the Management of EU Funds, stressed on Bulgaria’s commitment to the European Green Deal targets. The political party “We Continue the Change” was represented by Radoslav Ribarski, former Chairman of the Energy Committee in the National Assembly . He confirmed the comittment of the the most popular political party in Bulgaria to submit the proposed legislation for discussions in the newly elected parliament, following October 2nd’s elections. 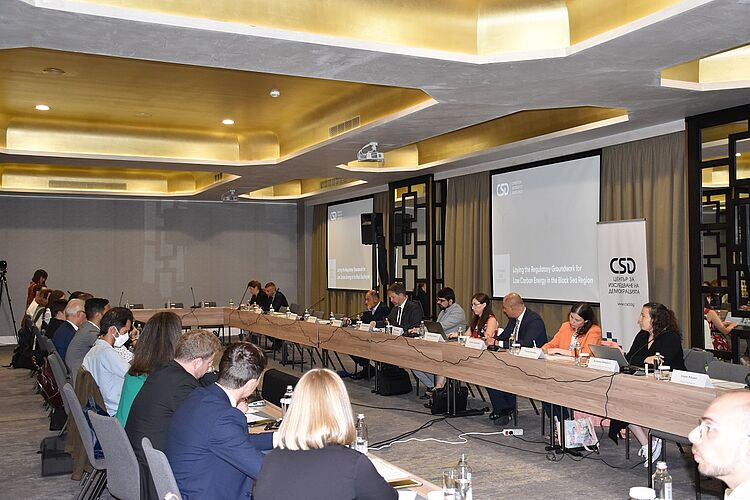 Radoslav Ribarski, former Chairman of the Energy Committee in the National Assembly