NGOs in Bulgaria are registered in more than 20 different registers, yet there is a lack of accessible, up-to-date and reliable information on their activities. This is one of the main conclusions of the Center for the Study of Democracy’s analysis dedicated to the reform of NGOs’ registration. The report was presented at the roundtable ‘Improving the registration of non-profit legal entities’ organised by the Center on 24 March 2016. The event was attended by representatives of the Council of Ministers, the Ministry of Justice, the Registry Agency, as well as NGOs, the IT sector and the media.

In her opening remarks, the Director of the Legal Program of the Center for the Study of Democracy, Dr. Maria Yordanova, noted that the organisation has worked actively to implement the reform in the registries system in the country for more than ten years and has made an important contribution to the creation of the Central Pledge Registry and the Central Commercial Register. Dr. Yordanova added that the changes in the NGOs’ registration are just one of the stages of the registration reform, and noted that the complete reform is detailed in the Strategy for Establishing a Central Register of Legal Entities and an Electronic Registration Center of the Republic of Bulgaria adopted by the Government in 2005.

Missing information, outdated data and discrepancies between the recorded circumstances in the different registers are among the most significant shortcomings of the system, explained Mr Dimitar Markov, Senior Analyst at the CSD Law Program. According to him, part of the existing registers are redundant and others in need of substantial improvement in order to be effective and to provide reliable information. The major changes that need to be undertaken include removing the obligation to submit the same documents in different registers, limiting the requirements to provide information so as to include only data that are not recorded in other registers, and minimising the cases in which presenting the organisation’s current status is required. Dimitar Markov also recommended amending the Law on Limiting Administrative Regulation and Administrative Control on Economic Activity in order to make it applicable to non-profit activities. A detailed analysis of the existing registers and proposals for legislative amendments can be found in the Center for the Study of Democracy’s new book 'The Legal Framework of Registers of Non-profit Organisations: Assessment and Proposals for Change’ presented at the roundtable.

Ms. Elena Markova, the Executive Director of the Registry Agency, stated that the Agency is ready to assume the register of non-profit legal entities, as provided for in the amendments to the Law on Non-Profit Legal Entities adopted by the Parliament at first reading. She specified that the successful launch of the new register requires an increase in the number of registration officers and clerks at the Agency, as well as additional training of the current staff. Ms. Markova assured the audience that the Agency has the capacity to maintain the NGOs register and for this purpose will use the platform of the Commercial Register with minor adjustments reflecting the specifics of these organisations.

The forthcoming amendments to the Law on Non-Profit Legal Entities should ensure a smooth transition from registering at the district courts to registration at the Registry Agency without this hindering neither the Agency’s nor the registered organisations’ activities, stressed the Program Director of the Bulgarian Center for Not-for-Profit Law, Ms. Nadya Shabani. She introduced the audience to the main points of the bill that has already been adopted at first reading. According to her, there are several issues that require special attention in order for the transition to the new register to proceed smoothly. They are linked to the existence of organisations with the same names, the registration of circumstances that have not been previously subject to entry (e.g. Executive board members), and the legal status of organisations whose public benefit status has been provisionally suspended. Ms. Shabani confirmed the findings of the Centre for the Study of Democracy that many of the additional registrations of NGOs should be abolished and stressed that the achievements of the Bulgarian law allowing NGOs to carry out business activities should be maintained.

Currently, the registration of NGOs is slower and more expensive than the registration of commercial companies, said Dr. Tony Dimov, Director of the Center for Regulatory Impact Assessment. According to him, the legislative changes submitted to Parliament are essential and their adoption should not be postponed in order not to delay the reform. He expressed his concern regarding the many proposals to the text of the bill introduced between the first and second reading, some of which deviate from the essence of the project to change the registration of NGOs from judicial to administrative.

The planned reform is financially supported through funds from the Operational Programmes, assured Dr. Atanas Slavov, Advisor to the Cabinet of the Deputy Prime Minister on Coalition Politics and Public Administration. He added that most of the proposals submitted between the first and the second reading of the bill were actually part of the original text but were dropped in the course of the inter-ministerial consultations that were held prior to the document’s submission to Parliament.

Ms. Iliana Nikolova, Executive Director of the Workshop for Civic Initiatives Foundation, expressed her concerns regarding some of the legislative proposals introduced between the first and the second reading of the draft, which threaten to impose illegitimate control over NGOs’ activities.

During the discussion the participants agreed on the need for continued reform. NGOs’ representatives expressed their willingness to cooperate with state institutions in preparing the necessary secondary legislation. Furthermore the discussion focused on the different deadlines for the new rules’ entry into force, as well as the need for the new and current employees of the Registry Agency to be trained by teams including representatives of NGOs and academia. 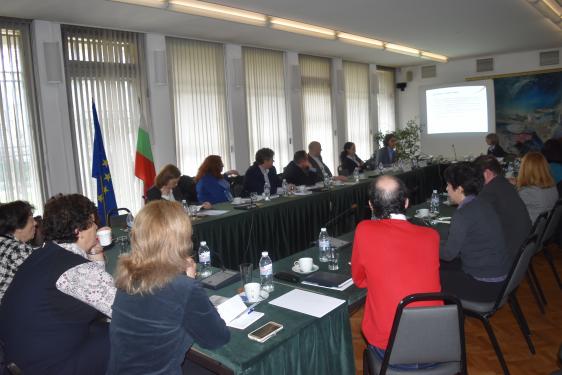 Dr. Maria Yordanova, Director of the Legal Program of the Center for the Study of Democracy

Legal Framework of Registration of Non-Profit Organisations: Assessment and Recommendations for Reform
Related