Trafficking in children and the three forms of exploitation that they most often fall victim to: begging, pickpocketing and sexual exploitation of boys have remained outside the focus of policy and research agenda. Furthermore, despite being overwhelmingly represented in all forms of trafficking the Roma remain isolated and stigmatized and there is a lack of understanding of the multiple vulnerability factors that affect them. To fill the gaps in this knowledge research work was undertaken in seven EU member states, both countries of origin (Bulgaria, Hungary, Romania and Slovakia) and destination (Austria, Greece, Italy).

To present the findings of the research and put forward policy recommendations, an international conference Child Trafficking among Vulnerable Roma Communities was hosted by the Center for the Study of Democracy in Sofia on June 16 and 17, 2015. The Conference gathered all project partners (Ludwig Boltzmann Institute, Censis, Eliamep, CEPS-CEU, People in Need and Soros Foundation Romania) as well as partner organisations working directly in Roma communities and representatives of service providers and national stakeholders. It also included representatives of relevant Bulgarian stakeholders such as the National Commission for Combating Trafficking in Human Beings (NCCTHB), the State Agency for Child Protection (SACP), the Agency for Social Assistance (ASA), Chief Directorate Border Police (CDBP) and Chief Directorate Combating Organized Crime (CDCOC) at the Ministry of Interior, the National Employment Agency (NEA) and the Ministry of Foreign Affairs (MFA).

The conference was opened by Ms. Yva Alexandrova, who outlined the scope of the work undertaken covering the three under-researched forms of trafficking in children for the purpose of begging, pickpocketing and sexual exploitation of boys. She outlined how the lack of knowledge on victims’ profiles, vulnerability factors and recruitment strategies affects the identification of victims and the adequate provision of assistance. She elaborated that the focus on Roma in these particular forms of trafficking was driven by expert opinions and previous research, which revealed a significant over-representation of Roma children among victims of trafficking for pickpocketing and begging, furthermore, the sexual exploitation of boys and transgender persons was first identified within the framework of the project as a risk group for trafficking. This calls for specific attention to be devoted to the vulnerabilities that the Roma face, the risk factors and the mechanisms of recruitment and exploitation.

Ms. Alexandrova also outlined the innovative approach of using participatory research methods when working with sensitive issues, such as child trafficking in Roma communities. This included the involvement of partners that work in various Roma communities, the conduct of extensive field work in communities, carrying out focus groups discussions with community representatives, mapping and ranking exercises, collection of life stories and involvement of community researchers. This approach helps gain deeper understanding of the phenomena and prevents further reinforcing of existing stereotypes and stigmatisation. It also allows for a more contextualised analysis of the data gathered and the development of specific community-based recommendations.

The second opening statement was delivered by Ms. Dimitrova presented the Bulgarian national context and the three forms of children trafficking studied during the research. She called it an ambitious initiative as it pays specific attention to particularly vulnerable groups at risk and for adopting both victim centered approach and employing participatory research methods. Ms. Dimitrova shared that the Commission has already planned to organise two awareness raising and training events as well as to incorporate the knowledge gathered during this research into their future initiatives. She stated that the Commission intends to open the doors to the Expert Group to new members coming from Roma civil society organisations working directly in communities, with the aim of ensuring their participation in national policy making in the area of anti-trafficking.

The opening of the conference was followed by three panel discussions. The first panel discussion was on the topic Vulnerabilities to trafficking for sexual exploitation of boys: a perspective from Hungary and Bulgaria. The moderator presented the background outlining that there is no big caseload but there are individual cases in Bulgaria and Romania. The panellists shared that there are cases of victims identified during the criminal proceedings who did not receive any support and assistance after that, as there are no existing mechanisms. In general the institutions are unable to identify the children victims of this form of exploitation, especially concerning boys. In Bulgaria were conducted interviews and collected life-stories of transgender persons from Roma origin, which indicate the existence of this phenomenon and point to possible cases of exploitation and trafficking abroad. There is also consequently no knowledge of their socio-economic background. A common recruitment strategy that was mentioned in Hungary is coming from peers in foster care homes. In the following discussion representatives from the partnering Roma organisations in Bulgaria shared their experience from the research.

The second panel discussion was on the topic Differentiating child begging from trafficking of children for the purpose of begging exploitation: perspectives from Austria, Greece and Italy. The moderator presented the background of the topic outlining that in destination countries the number of registered case of child trafficking for begging has declined. At the same time, proxy data coming from service providers and NGOs indicates that these activities are not diminishing, on the contrary are on the rise. All panelists outlined that a common problem is the lack of ethnically disaggregated data but proxy data shows that the victims of trafficking for begging are mainly of Roma origin. A new trend is that children are accompanied by their parents or extended family relatives which makes the analysis of the cases very difficult because the children might be involved in begging as a survival strategy of the family. This should not be mixed with trafficking for the purpose of forced begging exploitation. Distinguishing those two is very hard and one suggestion on how to handle the situation is looking carefully on case-by-case basis trying to find key elements which will lead to one of the two possible phenomena.

The third panel discussion was on the topic Challenges in identifying child victims of trafficking for pickpocketing: perspectives from Romania and Slovakia. The moderator presented the background of the topic outlining that trafficking for pickpocketing is a form of exploitation which is difficult to identify as the child has to be caught in the moment of the act. As a consequence there are no investigations, as this is difficult to establish. The panellists shared that victim profiles relate mainly to boys, the age varies between 5 and 18 with 13-14 being the most common. The data collected shows that traffickers are very much aware of the legislation and this makes it even harder to identify trafficking cases.

The working group discussions on June 17 focused on: Improving identification of children victims of trafficking for pickpocketing, begging and sexual exploitation of boys, Addressing challenges in providing effective and sustainable assistance to children victims of trafficking and Ensuring community participation in counter trafficking measures. The main objectives of the discussions was to engage service providers and state institutions in identifying the main challenges and stakeholders, as well as propose concrete areas for bi-lateral cooperation. The recommendations that came up at the end of the session concerned harmonization of knowledge, filling in gaps in legislation and improving coordination among all stakeholders especially among social services and child protection authorities stressing on the need of building trust, also developing a methodology on an EU level on bringing together social inclusion and anti-trafficking measures. A recommendation towards Roma communities points on the need to acknowledge the existence of children trafficking and to get more involved in cooperation with relevant stakeholders, carrying out role-modeled campaigns, establishing centres for community development and multi-functional teams of experts.

After the presentation of the conclusions from the working group sessions Ms. Kamelia Dimitrova outlined policy recommendations to improve victim identification and child trafficking response mechanisms. Among the presented recommendations were developing training on recognising indicators of exploitation and trafficking for the purpose of begging for local and national authorities; involving Roma community based organisations in raising awareness among the most marginalised groups on the risks of exploitation through bonded labour, on the negative effects on the children from hazardous and street work and on the possibilities for assistance; and strengthening investigation efforts to “follow the money” and investigate sources of conspicuous wealth in migrating communities. 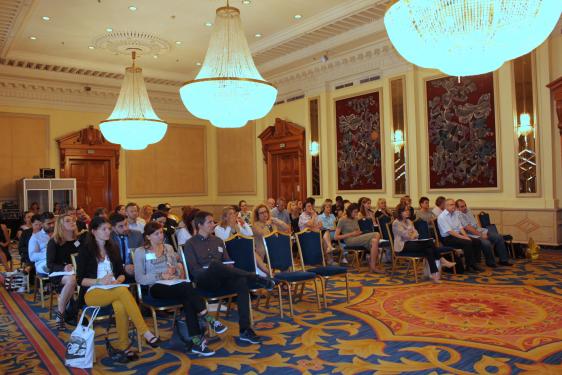 Participants in the conference

Participants in the working group sessions

Participants in the conference

Participants in the working group sessions