Like other EU countries, the Bulgarian economy and society greatly benefited from the revolution in information and communication technologies and the high speed Internet in the country. The rapid development of information technology and the widespread use of the Internet in everyday life, however, are inevitably associated with some significant security risks and increasing potential for certain crimes. Recent studies by Eurostat show that Bulgaria and Romania are among the Member States which are leading countries of origin of victims of trafficking in the European Union. During the period 2004 - 2015, the number of Bulgarian citizens who are trafficked into Western Europe ranges between 3,000 and 4,500 people. However, this figure does not reflect the actual number of victims because it applies only to registered cases of human trafficking.

In the light of these data, the Center for the Study of Democracy investigated the role of the Internet in the process of human trafficking and smuggling and presented the results at a national workshop on the 22 March 2017. The study was conducted within an international initiative, coordinated by the eCrime research group of electronic crimes at the Faculty of law of the University of Trento (Italy) in collaboration with the Center for the Study of Democracy (Bulgaria) and the University of Teesside (United Kingdom). Participants in the event were experts from the National Commission for Combating Trafficking in Human Beings (NCCTHB); Prosecutor’s Office of Appeals (POA); the National Investigation Service (NIS), General Directorate "Border Police", General Directorate "National Police", Directorate "Internal Security" and Directorate "Migration" at the Ministry of Interior; Institute of Psychology at the Ministry of Interior; Representation of the European Commission in Bulgaria; representatives of various NGOs and experts.

The seminar was opened by Lt. Gen. Chavdar Chervenkov, Senior Fellow at the Security Program of the Center for the Study of Democracy, who focused on the complexity of the human trafficking and smuggling processes. He also stressed that the data available are only the tip of the iceberg and in order to achieve effective results in combating this type of crime the good cooperation between all stakeholders is essential.

Ms. Slavyanka Ivanova, Senior Analyst at the Sociological Program of the Center for the Study of Democracy, presented the methodology and the results of the study. The study conducted includes a web-based research on the use of the Internet in the processes of human trafficking and human smuggling, as well as in-depth interviews conducted with key informants (representatives of LEAs and NGOs, traffickers, smugglers, human trafficking victims and refugees/illegal migrants). Ms Ivanova emphasized the role of the Internet in the process of recruitment, transportation and exploitation of victims. According to most of the interviewed, Internet is mainly used in the phases of recruitment and advertisement/exploitation, to a greater extent in human trafficking than in smuggling. The interviews conducted with both smugglers and with persons involved in illegal crossing of the border however, testify to the use of the Internet in these processes. From the results it becomes clear that in the non-homogeneous processes of recruitment the smugglers are not always the active side. Moreover the persons who want to go in another country through the services of smugglers, search and find information about the country of destination mainly via the Internet and mobile applications.

In regard to the trafficking for sexual and labor exploitation, the Internet also plays an essential role. The most significant is the use of the Internet in the stages of recruiting victims for sexual exploitation: the identification of the victim, establishing contact, arranging a personal meeting and subsequent negotiation of the travel of the victim. Only at the stage of conducting a personal meeting the Internet does not play a key role.

Although some opinions expressed that in the process of recruiting victims for labor exploitation the Internet is not used because of low education and poor computer literacy of potential victims, the data obtained by directly involved persons testify that the Internet actually plays a very important role, mainly in the stages of dissemination of false job offers, establishing a contact and applying for a job (often through Skype, where the communication cannot be traced) and in the finalization of working conditions and departure.

Nadya Stoynova, Analyst at the Security Program of the Center for the Study of Democracy, focused on the place and the importance of corruption in the process of trafficking of women in Bulgaria and outlined the main mechanisms and actors. Particular attention was placed on the three business models to which groups, dealing exclusively with trafficking of women for sexual exploitation, resorted most frequently; namely the model of private participation, the model with specialized involvement and the family model. Ms. Stoynova also presented the types of corruption mechanisms and analyzed the effects that corruption has on the phenomenon of human trafficking.

In the ensuing discussion, Ms. Kamelia Dimitrova, Secretary of NCCTHB shared that the theme of the role of the Internet is a key priority in the National Program for Combating Trafficking in Human Beings and in the Commission's plan for this year. She determined this first study in Bulgaria on this topic as very important and encouraging for the Commission and drew attention to the need for a reversal of the role of the Internet and its transformation into a method for prevention of human trafficking.

After the break, Ms. Slavyanka Ivanova presented the risks for involvement in trafficking online, shared by users of job offering websites and dating websites within the study. The survey data on the Internet establishes a potentially dangerous content only in terms of recruitment for the purpose of human trafficking as predominant are the examples in relation to sexual exploitation. In terms of advertisements of jobs abroad with potentially risky content are the ones in the sectors of personal care and agriculture. The data show that a very large share of people (about a quarter) responds to a similar advertisements of jobs abroad. Of those who came into contact, over 90% have asked only for additional information on the nature of the proposed job, a mere 4% have set off, and only 3% have departed and started working. The lack of clarity about the working conditions and the fact that the advertisements are anonymous are indicated as a major source of doubt that the job offering is potentially risky.

In the ensuing discussion Ms. Denitsa Dolapchieva of DG "Border Police" shared that the recruitment of persons wishing to cross the border illegally is increasingly organized through various websites and Facebook, but this concerns mainly cases of passing from foreign territory to Bulgaria. More rarely, there are cases of accommodation of immigrants on our territory followed by a transfer to Western Europe. Ms. Dolapchieva emphasized the need to collect data about the websites used in order to provide effective countermeasures.

Tihomir Bezlov, Senior Expert at the Security Program of the Center for the Study of Democracy, commented that information about the activities of smugglers in social networks takes place primarily in closed groups and channels and there is no way to obtain and analyze this data. Mr. Bezlov pointed out the possibility of extracting information about the mode of transport by checking the networks and the websites which persons captured on our territory visited via their mobile phones.

In the course of the discussion emerged another possible strategy to solve this problem, which involves specialized training of people and technical resources that can reach hidden Internet content. Dr. Atanas Rusev, Senior Analyst at the Center for the Study of Democracy, drew attention to the fact that the majority of Internet content is offered by large companies, which can be attracted to cooperate with the efforts of combating human trafficking and smuggling. In response, Nadya Kozhuharova of Animus Association Foundation shared a negative experience of negotiating with job offering websites for placing attractive banners against trafficking. Ms. Kozhuharova stressed that the website jobs.bg refused to cooperate, arguing that they work with loyal customers and do not have cases of false advertisements.

Ms. Galya Gugusheva, prosecutor at the Prosecutor's Office of Appeals, pointed as a major problem in proceedings related to human trafficking and smuggling the formality of the Criminal Procedure Code (CPC), explaining that the CPC does not allow the use of additional evidence, including those collected through the new technologies. In her opinion a change in this part of the CPC is compulsory, as it would avoid the repeating interrogations during the proceedings which will be mostly for the benefit of the victims.

Ms. Desislava Ivanova, an expert at the National Commission for Combating Trafficking in Human Beings, also stressed the need for changes in CPC, but along with this she highlighted the necessity for parallel work towards raising the awareness of potential victims since there is a trend of reduced sensitivity and reflex for seeking additional information in order to eliminate suspicions about the veracity of the advertisements. 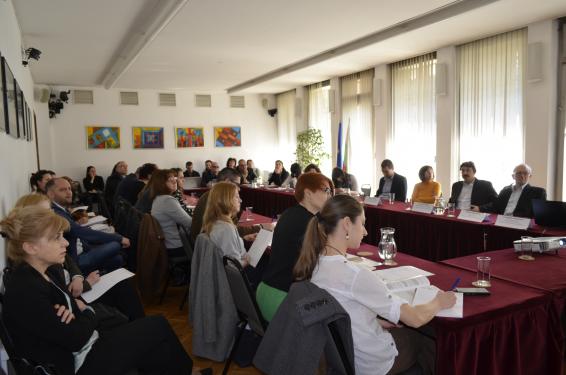 Participants in the national seminar "Human trafficking and smuggling – the new challenges", 22 March 2017

Lt. Gen. Chavdar Chervenkov, Senior Fellow at the Security Program of the Center for the Study of Democracy

Ms. Slavyanka Ivanova, Senior Analyst at the Sociological Program of the Center for the Study of Democracy

Participants in the national seminar "Human trafficking and smuggling – the new challenges", 22 March 2017 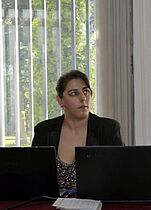 Ms. Nadya Stoynova, Analyst at the Security Program of the Center for the Study of Democracy

Mr. Tihomir Bezlov, Senior Expert at the Security Program of the Center for the Study of Democracy 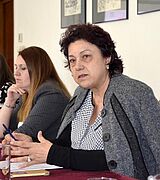 Ms. Galya Gugusheva, prosecutor at the Prosecutor's Office of Appeals

Ms. Desislava Ivanova, an expert at the National Commission for Combating Trafficking in Human Beings
Related 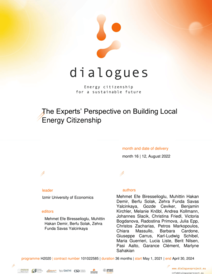