Prof. Stefan Petranov from the Faculty of Economics and Business Administration of Sofia University “St. Kliment Ohriski” presented the composite index “economy out of the shadows”, which is based on a combination of soft and hard data. It consists of two components – statistical, based on data from the National Statistical Institute, Labour office, National Social Security Institute and Bulgarian National Bank and sociological, which is based on business and population survey data.

Dr. Alexander Gerganov presented the two indexes of hidden economy – business and population, which have been constructed by the Center for the Study of Democracy since 2002. Alexander discussed the latest methodological innovations in the calculation of indexes since 2015 and compared the dynamics of indexes against other long time series such as the IMD’s global competitiveness rankings and data from NSI.

Mr. Trifon Pavkov, director of the Analysis and Forecasts Directorate of the National Revenue Agency presented the most recent developments in the agency related to its efforts to counter the hidden economy. Among them were data mining and big data approaches mixed with building call-center services for pro-active soft measures, which led to increase in due payments collection above 80% of dues, introduction of lottery based on cash receipts and other eventual innovations as introduction of mobile POS and electronic cash receipts.

Associate professor Eugenia Vasileva from the University of National and World Economy presented in-depth case studies conducted by her students on company and sector level.

Dr. Todor Yalamov presented the results of a study of hidden economy in Macedonia using the CSD index instrumentarium as well as the mirror statistics of trade between Macedonia and Bulgaria as an instrument for precise estimation of hidden trade.

Professor Emilia Chengelova from the Bulgarian Academy of Sciences presented the preliminary conclusions from the most recent survey of the Association of Industrial Capital and No-Shadow Economy Center. 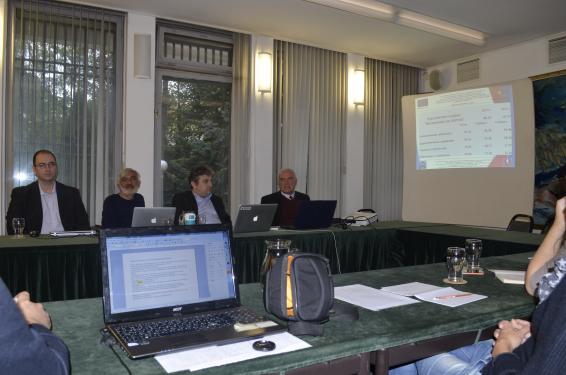