Rositsa Dzhekova
Topics
Radicalisation and terrorism
Round table Past event

The most well-known ISIS terrorist atrocities in Europe, including the 2015 Paris and 2016 Brussels attacks, saw individuals who in the past had been involved in organised crime and illegal trade graduate into the ranks of the world’s most successful terrorist organisation. To respond to the threat emanating from the “crime-terror nexus” in Europe, GLOBSEC, along with a team of leading experts on terrorism based in 11 European countries (including the Center for the Study of Democracy), conducted a study looking at the potential criminal pasts of over 350 individuals arrested for terrorism in 2015.

The key findings of the study, as well as opportunities for prevention of radicalisation and violent extremism in Bulgaria, were discussed during the roundtable From Criminals to Terrorists and Back? Evidence from Europe, held at the Center for the Study of Democracy on 9 July 2019.

Viktor Szucs, Project Coordinator at Globsec provided an overview of the findings of the study, which covered the criminal pasts of 349 arrestees for Europol in 2015 of whom 310 were accused of jihadist terrorism, along with over 120 variables such as socio-demographic profile, radicalization pathways, mental health issues, previous criminal involvement. The data is based mainly on open sources, such as media, as well on court files and information provided by national institutions (prosecutors, police, etc.). The data allowed for a typical profile of a European jihadist to be outlined as follows: mostly male, with the average age of 34 years, an EU citizen (either born in the EU or naturalised). Accordingly, a link with unemployment and low levels of education was also established. The main reasons reported for radicalisation include perceived discrimination and the disregard of the Western civilisation towards Muslim culture. Radicalisation, however, is not a fast process and took more than 4 years to evolve for most cases studied. The analysis mainly focused on the correlation between criminal activities and radicalisation of individuals, indicating a very small margin between the number of petty crimes and that of the severe crimes, rendering the assumption that mainly petty crimes lead to terrorism no longer valid. Financing for the terrorist activities on the other hand mostly has legal origin, such as benefits, salaries, and savings. The study concluded that there is no clear pathway between crime and terrorism.

Rositsa Dzhekova, Director of the Security Program of the Center for the Study of Democracy then discussed challenges to prevention of radicalisation and violent extremism having in mind the Bulgarian experience. She underlined the need of better understanding of the vulnerability factors in the process of radicalisation, emphasizing the interaction between individual susceptibility and exposure to an environment where engagement with extremist narratives and ideology (offline and online), as well as direct contact with recruiters is taking place. The online space deserves urgent attention in this regard - youth in Bulgaria is increasingly exposed to far-right narratives and ideas on social media, which are increasingly becoming mainstream, violence and hateful content are normalized. Rositsa highlighted findings from a new study on vulnerability of youth towards the influence of such narratives, based on social media observations and a national representative survey among youth aged 14-19. It showed how echo chambers are created online and fuel polarization, while the domonizing of “others” flows into the general discourse and becomes the norm. Over 30% of young people have been exposed to hateful or violent content online without perceiving it as inappropriate. Approval of far-right narratives is much higher and reaches 70%. A possible course of action is to change the conversation online and provide positive alternative narratives, as well as help young people build essential life skills and develop critical thinking trough interactive social media campaigns and engaging teachers in prevention.

The participants discussed potential implications for policy and practice and concluded that proper diagnostic and sound evidence are crucial for designing appropriate responses. 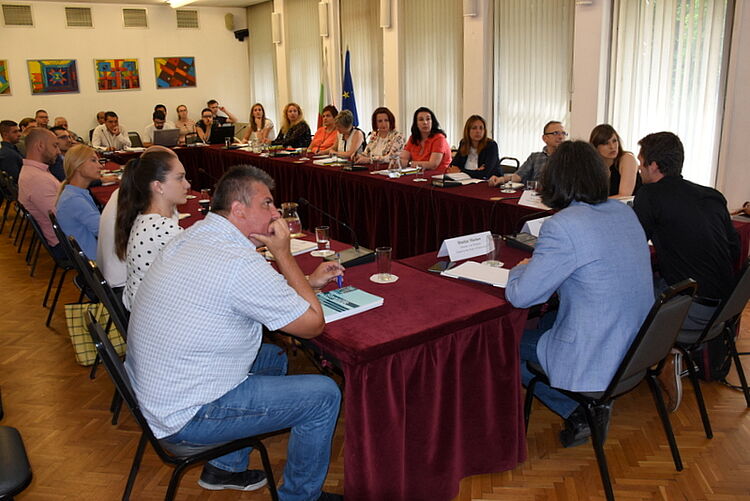 During the round table 'From Criminals to Terrorists and Back? Evidence from Europe', 9 July 2019, Sofia 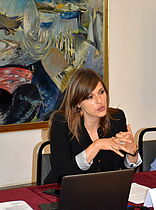 Rosita Dzhekova, Director of the Security Program of the Center for the Study of Democracy

The participants of the round table 'From Criminals to Terrorists and Back? Evidence from Europe', 9 July 2019, Sofia