On February 12, 2002 the Fourth Anti-Corruption Policy Forum of Coalition 2000 took place with the participation of all institutions involved in the fight against corruption: politicians, non-governmental organizations, the media, businesses and diplomats. The Forum, organized annually by Coalition 2000, is a high profile public event of anti-corruption initiatives, focussing on the increased cooperation between civil structures and institutions in the fight against corruption.

About 200 people took part in this year's Policy Forum. Addressing the participants, the President of Bulgaria, Mr. Georgi Parvanov, stressed the substantial role of the civil society in the fight against corruption and congratulated Coalition 2000 on the consistent efforts in the analyses of corruption, underlining that the result of these efforts is truly significant. The President pointed out that now, when the intolerance of Bulgarian citizens to this phenomenon is increasing, the necessity of a professional analysis of corruption and of a clearer definition of the countervailing measures becomes particularly important. There can be no simple evaluation of the fight against corruption, Parvanov stated. However, he said, this government and this parliamentary majority cannot be blamed for encouraging corrupt practices.

The Ambassador of the United States, Mr. Richard Miles, pointed out that Bulgaria has achieved some progress in the fight against corruption by moving up to 47th place in the world in 2001 from 60th place in the corruption perception index. He underlined the utmost importance of this problem as Bulgaria seeks integration into Euro-Atlantic institutions and addressed the government with concrete proposals. Ambassador Miles noted that "swift and focused investigations and prosecution of seriously compromised privatization deals are needed. Such prosecutions should not, however, degenerate into politically motivated witch-hunts. Successful prosecution is required before the public faith in government can be restored". Ambassador Miles further appealed to all political parties and non-governmental leaders to consolidate their efforts in the fight against corruption.

Dr. Maria Yordanova, Head of the Law Program at the Center for the Study of Democracy, presented the philosophy and approach of the Corruption Assessment Report 2001 and highlighted the differences from the preceding reports of 1999 and 2000. For the first time the problem of corruption is considered a problem of the three powers - the legislature, the executive and the judiciary. In the sphere of judicial reform, previously the main focus was on the court administration of justice, while in this year's report the analysis has covered the other two sections of the judiciary - the investigation and the prosecution. Special attention was paid to the other institutions and law enforcement authorities - the role of the police, the bar association, as well as the anti-corruption measures inside the Ministry of the Interior. Dr. Maria Yordanova underlined that the Report takes into consideration the globalization of crime and in particular of corruption and outlines the relations between the organized crime and corruption, as well as between the problems of terrorism and computer crime.

In his speech, the Minister of Justice, Mr. Anton Stankov, emphasized that the measures the Bulgarian government plans to take and has already taken are presented in the National Anti-Corruption Strategy. The anti-corruption measures in the judiciary in particular are a part of the Judicial Reform Strategy. Minister Stankov pointed out that the Ministry of Justice has already prepared a Draft Law on Amendments to the Law on the Judiciary, which corresponds to the recommendations in the Corruption Assessment Report 2001. He stated that he fully approves of the recommendations in the Report for changes to the Criminal Code that regulate corruption-related crime in greater detail. According to Minister Stankov, the consistency of the government's actions is demonstrated by the creation of the Anti-Corruption Committee in the beginning of February 2002, which has the opportunity to recommend anti-corruption measures to various institutions and government departments.

The government is willing to work with the non-governmental institutions and the media on the anti-corruption strategy, stated Minister of State Administration, Mr. Dimitar Kalchev. He pointed out that special attention would be paid to training administration officials, because low administrative capacity and bad service create actual preconditions for corruption. Minister Kalchev outlined that the National Anti-Corruption Action Plan of the government contains detailed descriptions of the obligations of all the ministries, including the people responsible and the terms of implementation.

The Interior Minister, Mr. Georgi Petkanov, emphasized that the Ministry of Interior had already elaborated and is implementing its own anti-corruption program. The program aims to create conditions for limiting corruption through effective mechanisms for promoting the status of the departments, working in the field of anti-corruption, and to improve the internal departmental control and the communication with the media. An internal departmental coordination council for curbing corruption has also been created. It defines the strategy and organizes the implementation for the detection and prevention of corrupt behavior in the Ministry of the Interior. Minister Petkanov expressed his satisfaction with Corruption Assessment Report 2001's appreciation of the activities of the Ministry of the Interior and highlighted the importance of Coalition 2000's objective evaluation as being a necessary watchdog initiative.

Mr. Silvi Chernev, Chair of the Bulgarian Chamber of Commerce and Industry's Court of Arbitration, pointed out some practical problems that accompany the implementation of judicial reform. In his opinion, the reform is not transparent; rather it is being implemented by a limited circle of experts. The state should encourage alternative dispute resolution mechanisms.

In her speech, Ms. Ekaterina Mihaylova, Chair of the Union of the Democratic Forces, stressed ways the politicians can curb corruption. Politicians should counter corruption not only by personal example, but also by promoting an understanding of corruption as a political problem. She also underlined that two fundamental anti-corruption laws were passed during the time of the UDF government. These were the Law on Political Parties and the Law on Property Disclosure of Persons Occupying Senior Positions in the State. Ms. Mihaylova appealed to the parliamentary majority to take into account the initiatives of Coalition 2000, and thus to demonstrate the benefits of cooperation between state institutions and the non-governmental sector. She illustrated this by stating that the Draft Law on the Ombudsman was written by Coalition 2000 experts and submitted to Parliament by MPs from the UDF at the end of the mandate of the previous parliament.

Mr. Mihail Mikov, Vice-Chairman of the parliamentary group of Coalition for Bulgaria, said that anti-corruption legislative measures are efficient only when they are clear, explicit and timely. He also stressed the important role of the National Assembly in the fight against corruption. The executive power must place limitations on its discretion, including by means of legislative initiative. Mr. Mikov underlined that the Corruption Assessment Report 2001 presents a comprehensive analysis of the premises and risks of corruption inherent to the current Privatization Law. He also thanked the organizers for their useful initiative and the considerable work they had done.

Mr. Alexander Stoyanov, Director of Vitosha Research, outlined some important trends in the public's opinion of corruption. He stressed increased expectations that civil society and the government will act to combat corruption. "The public intolerance of corruption is already a fact", Mr. Stoyanov said. He also noted that the value of the indexes for corruption susceptibility or the acceptability of corrupt practices decreased twice from July 1998 to October 2001.

Mr. Dimitar Bachvarov, Member of the Supervisory Board of the Privatization Agency, appealed to representatives of state institutions to take the initiative themselves and seek cooperation with non-governmental organizations like Coalition 2000. He pointed out that the Center for the Study of Democracy, the Coalition Secretariat, works efficiently and has elaborated a steady, universally acknowledged methodology for monitoring corruption.

In his speech Mr. Hristo Hristov, international secretary to the Union of the Free Democrats, joined in the high appraisal of the pioneering efforts of Coalition 2000. He pointed out that with the EU enlargement corruption is becoming more and more of a challenge and is an issue in many international initiatives. He noted that "it is very important that political parties strengthen international cooperation with similar parties, which have similar problems, and also use all possible sources for the exchange of experience and ideas, for sharing ideas about anti-corruption measures and mechanisms, which should then be adapted to our national circumstances".

Other participants in the discussion were Mr. Vladislav Slavov, Chair of the Supreme Administrative Court, Mr. Pavel Popov, Municipal Councilor, Sofia municipality, and also representative of the Civic Union Against Corruption, and Mr. Milcho Borov, Chair of the Board of Directors, Bulgarian Association for Information Technologies. Particular problems were mentioned, which proved that effective mechanisms for limiting corrupt practices are still to be implemented. A number of proposals were directed at administrative and legislative changes that would limit corruption pressure, promote civil activity and improve the government of the public-private partnership in dealing with corruption.

The Corruption Assessment Report 2001 gained the support of all the participants in the Policy Forum. It was recommended as a basic comprehensive document and a tool for good governance. 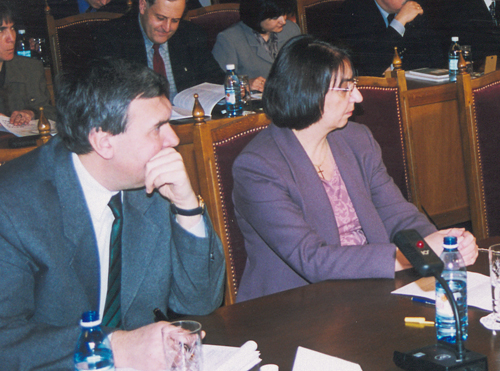 From right to left: Ms. Nadereh Lee, Chief of Democracy and Local Governance Office, USAID/Bulgaria, Mr. Silvi Chernev, Chair of the Court of Arbitration with the Bulgarian Chamber of Commerce and Industry, Mr. Assen Agov, Deputy Chair of the National Assembly

From left to right: Mr. Georgi Petkanov, Minister of the Interior, Mr. Georgi Parvanov, President of the Republic of Bulgaria, Mr. Ognian Shentov, President, Center for the Study of Democracy, Mr. Richard Miles, US Ambassador

From left to right: Mr. Sevdalin Bojikov, Deputy Minister of Justice, Dr. Maria Yordanova, Head of the Law Program, Center for the Study of Democracy, Mr. Dimitar Bachvarov, Member of the Supervisory Board of the Privatization Agency, Mr. Mihail Mikov, Vice-Chairman of the Parliamentary Group of the Coalition for Bulgaria 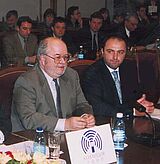 From left to right: Mr. Richard Miles, US Ambassador and Mr. Anton Stankov, Minister of Justice

From right to left: Mr. Ognian Shentov, President, Center for the Study of Democracy, Mr. Georgi Parvanov, President of the Republic of Bulgaria, Mr. Georgi Petkanov, Minister of the Interior, Ms. Ekaterina Mihaylova, Chair of the Union of the Democratic Forces 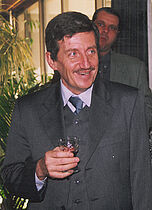