Foreign Meddling in the Western Balkans: Guarding against Economic Vulnerabilities

Foreign Meddling in the Western Balkans: Guarding against Economic Vulnerabilities

The Center for the Study of Democracy participated at a briefing at the Commission on Security and Cooperation in Europe, also known as the Helsinki Commission, held on 30 January 2018 in Washington D.C. The participants in the briefing noted that malign outside influence in the Western Balkans, in particular by Russia, is of increasing concern. The lack of a strong legal framework makes countries in the region especially vulnerable to foreign capital that can be used to sow instability, undermine integration, and delay democratic development. The discussion also highlighted how the United States and Europe can help boost economic resiliency, encourage good governance, and protect democracy in the Western Balkans.

In an attempt to improve the understanding of this process, the Center for the Study of Democracy developed assessments of the Russian economic footprint in Serbia, Montenegro, Macedonia and Bosnia and Herzegovina, presented at the event. Mr. Ruslan Stefanov, Director, Economic Program, Center for the Study of Democracy made a short statement, further explaining that the indirect footprint of Russian companies goes through several channels, including 1) the dependence of local companies on imports of Russian raw materials such as natural gas; 2) debts accumulated for gas supply; and 3) the dependence of domestic companies on exports to Russia or loans provided by Russia-controlled banks. He recommended that all infrastructure projects be in compliance with the highest standards for transparency and competitive tendering, and subject to independent cost-benefit analysis. 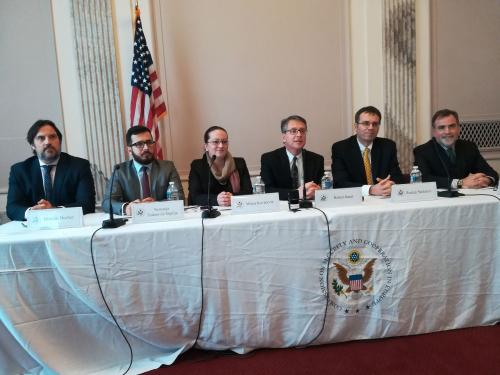