On April 7, 2000, the first conference of the Southeast European Legal Development Initiative (SELDI) with donors and international organizations was held at the headquarters of the International Development Law Institute (IDLI).

Opening presentations by Michael Hager, Director of IDLI, Minister Giuseppe Cipolloni, Vice Coordinator of the Stability Pact at the Italian Ministry of Foreign Affairs, and John Tennant, Deputy Assistant Administrator, Bureau for Europe and Eurasia, US Agency for International Development emphasized the importance of building the rule of law in the Southeast of Europe, in particular in the context of the Stability Pact. Speakers highlighted the key role to be played by non-governmental organizations in this process, specifically in the Southeast European Legal Development Initiative (SELDI). Minister Cipolloni reiterated the commitment of the Italian government to the stability and development of Southeast Europe, and expressed its support to SELDI. This support is the continuation of years of collaboration between IDLI and the Ministry of Foreign Affairs. The relevance of SELDI’s focus on corruption is evident in the role of corruption in making possible cross-border organized crime and thus regional insecurity.

Speakers stated the important contribution SELDI with its focus on anti-corruption, judicial reform and the legal aspects of international trade will make to the development of the region. Speakers recognized the need for going beyond country-specific efforts towards region-wide cooperation networks, particularly as regards issues of democratic governance, and the pro-active role to be played by NGOs in such networks.

SELDI was conceived in late 1998 and grew out of a number of successful projects by the IDLI and CSD in Bulgaria and the other countries in the region. A network of partner organizations in all countries concerned has been established. SELDI is thus intended to multiply the effect of public-private coalition building for development throughout the region. It provides a forum for cooperation among the most active civil society institutions, public figures and government and international agencies in Albania, Bosnia & Herzegovina, Bulgaria, Croatia, FYROM, Greece, Romania, and Turkey. Particular attention is devoted to involving Yugoslav organizations and cooperation with the democratization efforts in Kosovo.

Public-Private Partnership. SELDI is envisaged as a major contribution to the institutionalization of public-private cooperation in the promotion of the rule of law in Southeast Europe. It is based on the successful implementation of such a partnership established by CSD and IDLI in the framework of Coalition 2000, an anti-corruption initiative in Bulgaria. The innovative approach to combating corruption, introduced by Coalition 2000, has been acknowledged internationally (a recent World Bank Report “The Road To Stability And Prosperity In South Eastern Europe: A Regional Strategy Paper” notes that in the field of anti-corruption/good governance in SEE “there are some groundbreaking attempts by civil society groups, such as Coalition 2000 in Bulgaria, which has developed a common program of practical actions, with active participation of government and national NGOs”). SELDI is an open and transparent process seeking to involve all stakeholders in the region – national and international. A major complementary impact of the Initiative will be the enhancement of capacity of civil society organizations in the region to collaborate with government institutions in addressing major reform and development issues in their own countries.

Civil Society Driven Effort. Civil society organizations will be the driving force of SELDI. It is distinguished from the other region-wide initiatives in that it seeks to facilitate practical efforts aimed at addressing specific needs and in the leading role of civil society and private sector institutions in its implementation. SELDI will establish a process whereby the input of all concerned institutions in the countries in the region will be incorporated in its work, through a number of local partner organizations, which will serve as an interface to the national institutional environment.

Building Awareness and Monitoring Institutional Change. The monitoring and awareness building activities included in SELDI’s are designed to address the role of public pressure in promoting the rule of law in the region. Results of the regional corruption monitoring system – already in its pilot phase in Bulgaria, FYROM and Albania – are used to encourage “competition” among governments and nations in the region to “outperform” others in establishing an image of a rule of law society. Public perception – and participation – is also of key significance for the success of reforms and will be addressed by awareness instruments with a regional appeal and by publicizing the results of comparative corruption monitoring.

Contributing to Regional Security. The working table on security of the Stability Pact for Southeastern Europe emphasizes combating “organized crime, corruption, terrorism and all criminal and illegal activities” as its priority. All of SELDI’s components – introducing a public-private framework for combating corruption, promoting judicial reform and cooperation and encouraging the adoption of the rules of international trade – are directly linked to the achievement of this priority. Particularly relevant is the focus on anti-corruption efforts as corruption it is the main factor making possible the increasing activities of organized crime and illegal trafficking in goods and people in the region. The promotion of common standards in the work of the judiciary and application of international trade rules will also assist in the creation of an institutional environment favoring security and stability in the region.

1. Coalition Building and Monitoring in Anti-Corruption

This project aims to introduce a region-wide institutional framework for public-private Cooperation in countering corruption in the countries of Southeast Europe. It will also seek to contribute to an enhanced cross-country public/civic support and participation for anti-corruption measures. The anti-corruption component of SELDI has been discussed and elaborated with regional stakeholders at the Coalition Building and Monitoring in Anti-Corruption: Strategies and Impact in Central and Eastern Europe conference held in June 1999 in Varna, Bulgaria and at the Southeast Europe Anti-Corruption Forum, held in Sofia on 25-26 February 2000.

The project has four components. Coalition Building – developing of a comprehensive strategy for regional public-private co-operation in countering corruption. This component is largely based on the successful experience of Coalition 2000. Monitoring - the project will introduce a regional anti-corruption watchdog and diagnostic facility. A pilot round of monitoring in Bulgaria, FYROM and Albania has been carried out. Awareness Building – will develop a variety of cross border awareness tools for presenting a coherent message to the public in all countries concerned. Training – will train a critical number of organizations and individual experts in designing and implementing anti-corruption strategies.

2. Strengthening of the Judiciary

The project will rely on IDLI’s training capacity and the experience of the Judicial Reform Initiative for Bulgaria (www.csd.bg/jri) to introduce a regional training facility aimed at raising the professional knowledge and skills of the magistrates and court administrators. Its overall objective is to contribute to the development of accountable, legislative branches and independent judiciaries. Notably, the project will also seek to enhance the collaboration between countries of the SEE region in judicial structures, which is currently inadequate.

Through training seminars, setting up of advisory services and training of trainers, the project will create enhanced awareness and understanding of the rules of international trade, particularly WTO Agreements and of relevant regional trade integration agreements. The project will explore the possibilities of creating trade law center(s) in the region as a means of ensuring such accessibility and diffusion of knowledge. The project will identify the actually applied trade regimes (border and non-border measures) among the countries of the region and will make such information readily available for the region’s economic operators.

As suggested during conference discussions, strengthening the negotiating capacity of SELDI countries could also be a complementary target for the trade component of the Initiative.

The Distance Learning Center will be part of a Global Distance Learning Network (GDLN) currently developed by the World Bank. In this way, the proposed DLC will have instant access to a global knowledge base. It will facilitate the simultaneous provision of courses, seminars, and discussions for a variety of global participants, linked by interactive video, electronic classrooms, satellite communications, and Internet facility. The DL Center will create a “first node” cost-effective training facility for target groups in the SELDI countries for World Bank, IDLI and CSD training programs, and will create an indigenous capacity to identify and access knowledge needed to improve legal development policies in Southeast Europe.

The United States Agency for International Development has been supporting Coalition 2000 since its launch in 1998 and is strongly supporting the Southeast European Legal Development Initiative (SELDI). USAID representatives highlighted anti-corruption as the unifying concept of SELDI. USAID has promoted the inclusion of SELDI in the Pledges for Quick Start Stability Pact Regional Projects and Programmes.

USAID pledged immediately available support of 0,000 in support of the anti-corruption component of SELDI, linked to the subsequent availability of co-financing from other sources. It has been emphasized that anti-corruption, as a fundamental rule of law problem, should be a priority for SELDI.

The UNDP mission to Bulgaria has been actively cooperating with Coalition 2000 and its Special Representative for Post-Conflict Development in Southeast Europe is member of the International Steering Board of SELDI. It was emphasized that Coalition 2000 has taken encouragement from the best international practices and has itself become and international best practice by being the basis of SELDI.

UNDP recognizes that the root cause of problems in the region has not been ethnic hatred but instead, the unwillingness of the states to enforce the rule of law. The importance of SELDI and its relevance to the objectives of UNDP is highlighted by its emphasis on the two core concepts of the Stability Pact – rule of law and human development.

A commitment was undertaken to present the Initiative to the Regional Project of Good Governance of the UNDP with the purpose of it being coordinated/integrated with the UNDP project activities.

The Canadian government representative made a statement of very positive support and a commitment to relay the very positive and concrete nature of the Initiative in the context of the overall involvement by Canada in the region. The nature of funding for the region is flexible and it is believed therefore, that funding could be possible.

The Austrian government representative made a very positive assessment of the Initiative and made a commitment to assist in the identification of sponsors for the project and to commence discussions in Austria. The role of the private sector in this process was highlighted.

As the adoption of European standards in good governance, enforcement of law, and public life in general is of primary importance to the success of stabilization of the SEE countries and their re-integration into European and Euro-Atlantic structures, cooperation with the Council of Europe and the European Union in the implementation of SELDI is important. The Council of Europe has a representative – Mr. Guy De Vel, Director General of Legal Affairs – in the International Steering Board of SELDI. This will ensure coordination with the Anti-Corruption Initiative of the Stability Pact.

The first SELDI donors’ conference concluded with unanimous support for the Initiative. It was decided to follow up the conference with contacts with other EU governments, as well as private foundations, to solicit further support for the activities in the SELDI project portfolio. 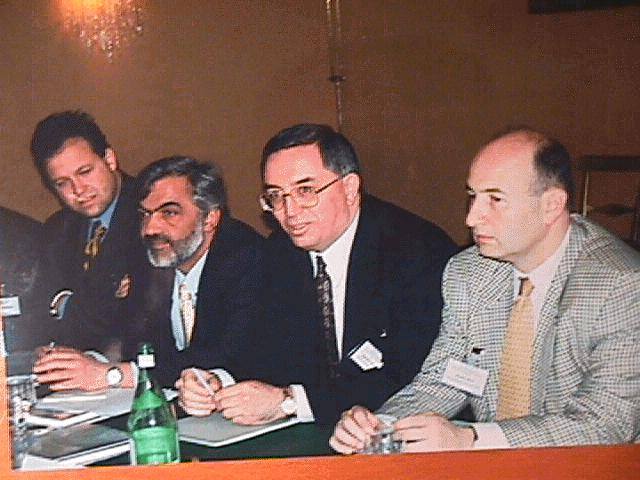