Trafficking in human beings (THB) for the purpose of sexual exploitation has become one of the largest Bulgarian criminal markets since the beginning of the new millennium. Trafficking and prostitution not only generate huge incomes for Bulgarian organised crime but also have detrimental social and economic impact on local communities.

On June 28, 2018, the Center for the Study of Democracy held a round table discussion on Financing of human trafficking for sexual exploitation. The event brought together representatives of the National Commission for Combatting Traffic in Human Beings, General Directorate National Police, General Directorate for Combating Organised Crime, Sofia Metropolitan Directorate of Interior, Commission for Countering Corruption and Forfeiture of Illegally Acquired Assets, academia and experts working in this field.

Dr. Atanas Rusev, Director of the Security Program of the Center for the Study of Democracy, and Ms. Kamelia Dimitrova, Secretary of the National Commission for Combatting Traffic in Human Beings, delivered opening remarks. Ms. Dimitrova introduced the Commission’s structure and activities with regard to the support and protection provided to THB victims, as well as its role in the area of prevention and strengthening capacity building for countering human trafficking. Dr. Rusev highlighted the fact that over the last years the Center has been working on different aspects of the THB phenomenon and that the data presented at this round table comes as a result of a nearly two-year research and interviews conducted with representatives of the prosecution and police and with criminal markets actors.

Tihomir Bezlov, Senior Fellow at the Security Program of the Center for the Study of Democracy, outlined the scale, structure and trends of the domestic and cross-border sex markets. According to estimates from 2012, there were some 10 000 – 20 000 sex workers from Bulgaria involved in the cross-border sex market, while the available data for the time period 2016-2017 indicate a decrease in this number by 30-50%, both as a result of changes in the criminal market structure and for demographic and economic reasons. With reference to the domestic market, the decreasing number of victims registered by the Prosecutor’s Office reflects just the fewer number of initiated pre-trial proceedings. Yet interviews with criminal business actors point to growth, evolution and adjustment to the new conditions, which make the old model of police control less effective.

Georgi Apostolov, Coordinator of the Bulgarian Safer Internet Centre, Applied Research and Communications Fund, emphasized on the partnership with the General Directorate on Combating Organised Crime and with Interpol, taking into account that the majority of sexual content on the Internet featuring children involves child victims of criminal networks with servers located in Europe. Ms. Kamelia Dimitrovaadded that the reports of the European institutions also highlight the role of the Internet and that the European Commission has launched a partnership with Facebook aimed at raising the awareness of sexual exploitation by sending alerts to the potential victims.

Dr. Atanas Rusev presented data related to the financing of THB for sexual exploitation and noted that while institutions tend to focus solely on the proceeds from this crime, financing actually happens prior to and at the time of its commitment. Dr. Rusev defined the sources of initial capital necessary to enter the market of TBH for sexual exploitation, the costs associated with each stage of the process, various forms of settlement of payments and the methods for money laundering and re-investment of proceeds. The possible steps for countering the problem are the development of institutional capacity for effective financial investigations and their simultaneous handling along with the criminal ones, as well as improving the coordination among Bulgarian authorities.

Inspector Stoycho Kubatov from the General Directorate National Police stated that due to its complex nature, sometimes the crime of THB for sexual exploitation is being accompanied by a broad array of severe crimes against the person, including murder.

Inspector Milen Stoyanov from the General Directorate for Combating Organised Crime claimed that internal reorganizations and the reduced number of officers specialised in money laundering investigations pose serious impediments in the work of law-enforcement agencies. As regards cross-border crimes, the work process is being additionally hindered by the lack of information exchange with foreign counterpart police forces.

Trifon Trifonov, Director of the International Activities, Coordination and Control Directorate at the Commission for Countering Corruption and Forfeiture of Illegally Acquired Assets, elaborated on the role of the Commission with respect to TBH and money laundering. As one way of neutralising the result of those crimes, Mr. Trifonov referred to the non-conviction based forfeiture of illegal assets as a tool for countering organised crime. The total value of the illegal assets seized as of the establishment of the Commission up to date is 116 million BGN, which has a preventive effect as well.

In conclusion, Dr. Rusev stressed that CSD’s work on this important topic will continue, focusing on the traffic of human beings for labor exploitation. 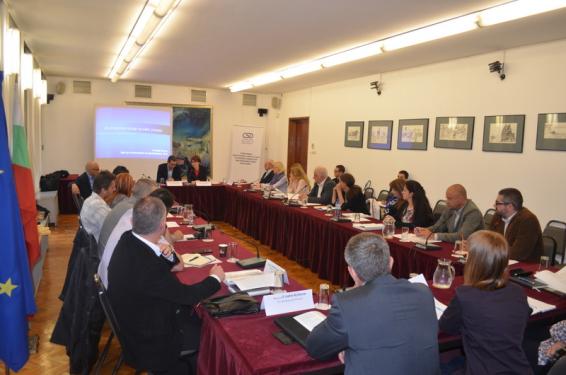 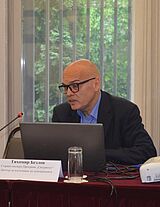 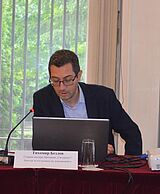 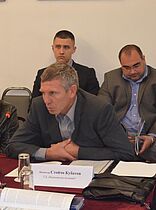 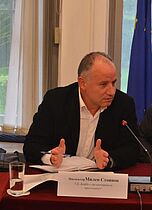 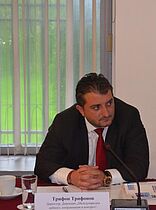 Could HRs in the public administration be a force to reckon with domestic violence?