The EU and the United States have both committed to the advancement of good governance and democratic development in region. The European Union has pledged up to EUR 30 billion in its new Economic and Investment Plan for the Western Balkans, and has included a special “Rule of law, fundamental rights and democracy” window in IPA III. In June 2021, President Biden identified the fight against corruption as a core national security interest, followed by the launch of the “Summit for Democracy” for a select group of invited governments in December 2021. Still, the rising geopolitical tensions have the potential to pull resources and attention away from domestic reforms, while corruption and state capture continue to threat the unfolding efforts for recovery after the pandemic crisis and the consequences of the Russian invasion of Ukraine.

The regional policy forum held on 7 April 2022 in Skopje focused on the challenges that Western Balkan societies face in closing the institutional gaps that allow the flourishment of corruption. The forum included a presentation of SELDI’s Corruption Monitoring System (CMS) for the period 2014-2021. Dr. Aleksandar Gerganov, Senior Analyst at the Center for Study of Democracy underlined that the anti-corruption progress achieved in the Western Balkans between the early 2000s and mid-2010s has been halted or even reversed. Self-reported involvement in corruption in the Western Balkans remains very high - 20-40% of the citizens admit to having paid some kind of a bribe. Tolerance of corruption by the general public, although declining, still ranges between 25% and 40%. The most concerning fact, revealed by the CMS however, was that the overwhelming majority of the citizens has lost hope in the feasibility of anti-corruption policy responses. This points to a deep-seated crisis in the trust in governments.

In conclusion, the representatives of the CSOs agreed that the lack of political will in implementing systemic reforms remains as a core democracy challenge. The participants called for more decisive actions, including stricter monitoring of budget spending, harsher sanctions for rule of law violations, and increased support and EU funding for those who implement successful reforms. The adoption of new laws on lobbying and on the seizure of assets, the opening of registers, the cross-border exchange of information allowing checks of asset declarations, as well as the media portrayal of victims of corruption were also among the policy recommendations voiced at the forum. 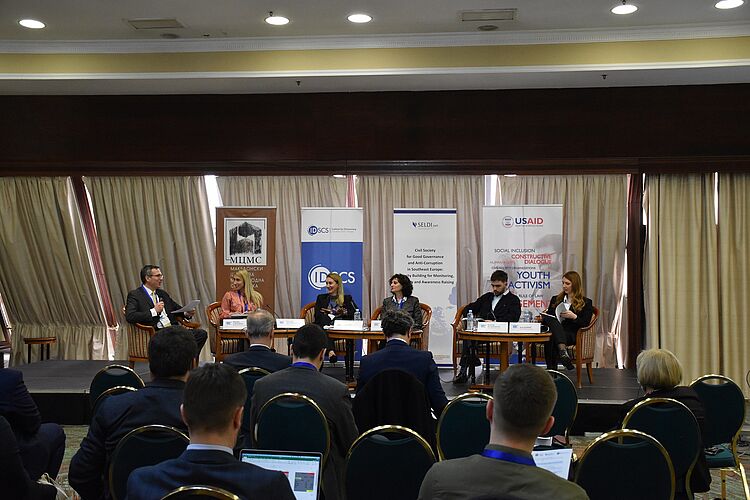 Dr. Aleksandar Gerganov, Senior Analyst at the Center for Study of Democracy / SELDI Knowledge and Outreach, and Assistant Professor at the Institute Philosophy and Sociology, Bulgarian Academy of Sciences, Sofia, and Daniela Mineva, Senior Analyst, CSD

The speakers of the Regional policy forum ‘Fight Against, Corruption: The Western Balkans in focus’, Skopje, North Macedonia, April 7, 2022

European Western Balkans: Regional Policy Forum: Political will in the fight against corruption is essential
Related