On 31 March 2015, the Center for the Study of Democracy hosted an expert workshop, intended to present and discuss the final version of the Integrated Anti-Corruption Enforcement Monitoring Toolkit (MONAC tool) along with the results from the pilot testing of the instrument.

Dr. Ognian Shentov, Chairman of the Center for the Study of Democracy, opened the meeting by noting that the tool is meant to assess the extent to which anti-corruption policies cause institutional change. Therefore, it has significant potential to assist anti-corruption efforts not only in problematic states like Bulgaria, but also in the European Union at large.

Dr. Alexander Stoyanov, Director of Research at the Center, elaborated on the methodology of the tool. The main assumption that the MONAC tool rests on is that corruption happens at the point of interaction between citizens/ businesses and public institutions and this is where it should be addressed. The tool draws on desk research, in-depth interviews with experts and employee surveys and is designed to account for standard corrupt behaviors such as abuse of power, as well as for more complex corrupt relations like clientelism. The tool is implemented in two phases: mapping and evaluation phase. During the first stage, the organization's anti-corruption policies are identified with the help of experts and the principal activities carried out by the institution are established. During the second phase the established corruption risks zones are taken into account in the evaluation of actual policies. Dr. Stoyanov expressed the opinion that in order to give best results, the tool is designed to be applicable to different organizations and needs to be understandable for officials without anti-corruption expertise. He underscored the importance of emphasizing the policy diagnostic side of the tool, since employees are much more likely to cooperate when they do not feel like their personal performance is scrutinized.

Mr. Alexander Gerganov, a researcher at the Center, presented the results from the pilot testing of the MONAC tool at the General Directorate Border Police of the Ministry of Interior. Eight principal organizational activities were identified. For only two of them, border security and checkpoints, specific anti-corruption policies exist. Other activities are regulated by general policies and initiatives of the Ministry of Interior. Interestingly, amongst border police officials, these two activities were perceived to carry the lowest corruption risk, suggesting that targeted interventions work well. All the anti-corruption policies of the border police were evaluated on the basis of four indicators: risk coverage, implementability, implementation and effect. Mr. Gerganov gave the asset declaration obligation as an example of a policy, which while having good implementability and implementation scores, did not cover risks well due to its generality and so gave poor results. He also noted that it is typical for Bulgarian public organizations to have no targeted policies addressing specifically defined corrupt behaviors and so vulnerabilities are overlooked. In that sense the instrument is very useful since it identifies the problem zones. However, self-implementation by organizations might prove a challenge and the development of a tutorial to enable use might be needed.

Dr. Fabrizio Costantino, a researcher from the University of Trento, presented the results of the tool's pilot test at the Trento Health service and the Riva del Garda municipality. He stated that perceived corruption is traditionally very high, with Italy scoring first in the European Union. Elaborating on the strengths of the tool, Dr. Costantino noted that it provided valuable policy effectiveness assessment at the implementation level. As problems he pointed out that the identification of activities could sometimes be problematic as some of the activities are too organization specific, which compels a return to the theoretical level. Moreover, the stratification of national legislation can be a complicating factor, necessitating reference towards national legal frameworks in order to better understand both relevant activities and rules that organizations are governed by.

Following the presentations of the implementation of the Integrated Anti-Corruption Enforcement Monitoring Toolkit in Bulgaria and Italy, EU experts on anti-corruption measures discussed the methodology of the tool and its results.

Dr. Elena Hounta from the Basel Institute on Governance suggested that the involvement of other stakeholders outside the organization itself might be beneficial as it would ensure a more comprehensive picture. Moreover, sometimes employees, especially those on lower levels, have insufficient knowledge about anti-corruption policies. She indicated that it is also important to consider how the results that the tool generate will be used to advance the anti-corruption efforts of organizations.
Dr. Todor Galev, Senior Analyst at CSD's Economic program, noted that in Bulgaria, all public institutions, which handle EU funds, are obliged to annually assess their anti-corruption efforts and the MONAC tool could be valuable in assisting them to carry out that duty.


Mr. Lorenzo Segato, co-founder and director of the Research Centre on Security and Crime (RiSSC) stated that it might be beneficial to include further indicators on the personal integrity of the employees and on decision making procedures. Moreover, focusing too closely on formal rules might obscure some types of corruption. In Italy, the strict observance of all procedures is an indicator that something might be wrong.

Mr. Roberto Vannucci from the University of Pisa and Mr. Sorin Ionita from the Expert Forum in Romania agreed, stating that sometimes it is exactly discretion and not the existence of too much red tape that facilitates corrupt practices. Mr. Ionita noted that an important aspect that should be taken into account when implementing the MONAC tool is that corruption in public procurement needs to be monitored also at national level, since it is the government that allocates the resources to specific municipalities. Corrupt relations might not be immediately visible on municipal level, but the companies selected in public procurement procedures might be linked to high level government officials. 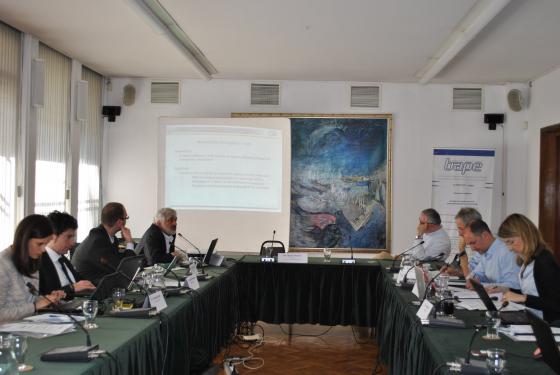 Dr. Ognian Shentov, Chairman, Center for the Study of Democrcay

Dr. Alexander Stoyanov, Director of Research, Center for the Study of Democracy

Dr. Alexander Stoyanov, Analyst, Center for the Study of Democracy

Mr. Lorenzo Segato, Co-founder and director of the Research Centre on Security and Crime (RiSSC)