The Kremlin has started to unilaterally cut gas supply to Europe making some of the worst nightmares of EU policymakers reality. This is part of the Kremlin Playbook in Europe to undermine the European unity through weaponizing energy. The geopolitical crisis has shown that Europe needs to improve its energy sector governance to decouple from Kremlin’s malign economic and political influence.

These are some of the key takeaways from the policy roundtable New Energy Governance to Address Europe’s Energy and Climate Security: Lessons from the Kremlin Playbook, organized by the Center for the Study of Democracy (CSD) on 28 June in Brussels in partnership with the Center for European Policy Studies. At the roundtable, CSD presented the main insights from the Energy and Climate Security Risk Index (ECSRI), a new policy tool, which helps track the energy and climate security risks in the EU as they are influenced by the Russian invasion in Ukraine.

The assessment clearly demonstrates that Europe’s energy and climate security risks have increased markedly since the annexation of Crimea in 2014, as a number of European countries deepened their dependence on Russian natural gas imports, with Italy and Germany alone accounting for half of this growth. To enable its influence over European energy markets, Russia has entrenched powerful patronage networks to capture strategic decisions and undermine the common European energy and climate security policy

At the roundtable, prominent European and U.S. energy and foreign policy experts joined the discussion of the future of the European energy and climate security including Melanie Kenderdine, Principal at the Energy Futures Initiative and former Energy Counselor to the U.S. Energy Secretary and Director of the Department’s Office of Energy Policy and Systems Analysis, Can Ogutcu, Analyst for Energy Security in the Political and Security Analysis Group of the NATO Supreme Headquarters Allied Powers Europe, and Radan Kanev, Member of the European Parliament’s Committee on the Environment, Public Health and Food Safety and Member of the European People’s Party. The discussion was moderated by Christian Egenhofer, who is theAssociate Senior Research Fellow at the Centre for European Policy Studies.

All speakers united behind the thesis that the structural energy and climate security risks can be overcome only by a long-term policy effort that will enable the achievement of ambitious security of supply and decarbonization targets. This includes the reduction of reliability risks related to high energy intensity, empty gas storages, the still heavily oil-dependent transport sector and the low capacity-diversity of the powersector.

Meanwhile, the experts were divided on the role of natural gas in Europe. Ms. Kenderdine insisted on the need to speed up the construction of new LNG export terminals in the US, which could help Europe’s supply diversification strategy and improve its security of supply.

Other experts saw only a short-term solution in LNG. Mr.Ogutcu warned that new gas infrastructure projects face a real risk of becoming stranded assets and cautioned againstthe long lead times and capital costs of energy projects. He also expressed his concern that energy security challenges and different national approaches to address these challenges are creating a real risk of dividing Europe over the coming year.

Mr. Kanev reflected the EU consensus on the future of natural gas in the European energy system in light of upcoming plenary session at the EU Parliament, where MEPs will vote on the Commission’s proposal to include gas and nuclear activities in the taxonomy. Mr Kanev claimed that natural gas is not sustainable due to its price volatility, the need to rely on foreign suppliers and its carbon intensity.

In addition, the unanimous opinion was that a full natural gas phase out by 2035 on the back of decarbonizing the power sector would require a massive push to fully utilize Europe’s renewable energy potential. The easiest way to decarbonize the European economy, and hence, achieve sustainable energy independence is to accelerate the process of electrification based on decentralized renewable energy and storage systems.

There are also, however, emerging geopolitical risks on the road to net zero, related to the concentration of mineral resources used in renewable energy technology in the hands of authoritarian states such as Russia and China. Ms. Kenderdine emphasized the need for a long-term strategy for tackling these risks, as they could undermine the viability of the global energy transition. Mr. Ogutcu warned of a growing trend pointing to “a post-Russia world where there will be new electro-states emerging as the key determinants of global energy and climate security”. 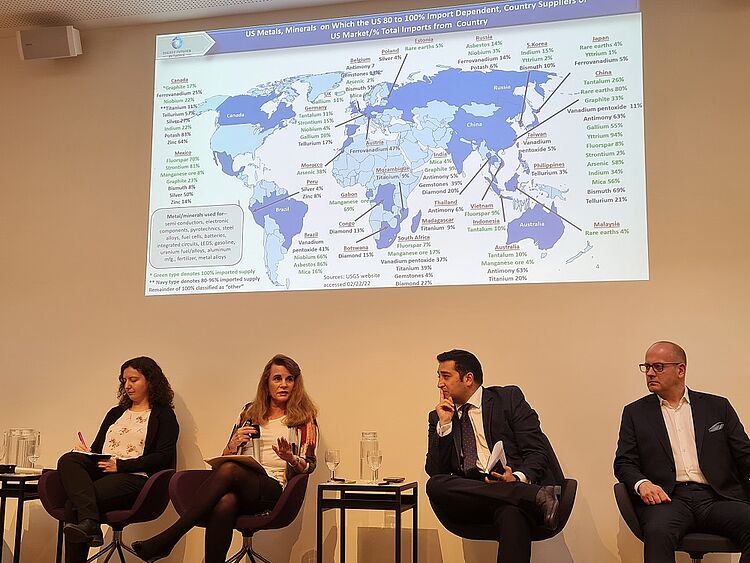 Melanie Kenderdine, Director, Energy Futures Initiative, former Advisor to the Secretary of Energy and Director of the Office of Energy Policy and System Analysis at the US Department of Energy, and Can Ogutcu, Analyst for Energy Security, Political and Security Analysis Group (PSA), NATO Supreme Headquarters Allied Powers Europe (SHAPE)

EURACTIV: Guess what? Hungary & Co. have no need for opt-out from Russian-oil ban