Enhancing the Integration of Beneficiaries of International Protection

Enhancing the Integration of Beneficiaries of International Protection

On 30th and 31st of March 2017 the Center for the Study of Democracy hosted the first Workshop along the international initiative implemented in Bulgaria, Greece, Italy, Malta and Spain for development and implementation of reception and integration trainings for beneficiaries of international protection. The workshop involved presentation and discussion of the trends in asylum related migration and an overview of the refugee reception and integration systems in the five participating countries. In addition, a discussion was held regarding the methodology for the forthcoming conduct of national mapping studies of the training needs of beneficiaries of international protection to provide basis for development of relevant training modules in the countries in need.

Mila Mancheva, Senior Analyst at the Sociological Programme of the Center for the Study of Democracy, opened the event by presenting the framework of the initiative and stressed on its aims and activities. In the following sessions of the workshop the Italian and the Spanish research teams outlined the situation regarding asylum seekers and refugees in their respective countries. Anna Italia and Luigi Bellesi from CENSIS presented the good practice of the Italian System of protection for asylum seekers and refugees (SPRAR) and stressed on the roles that the different national, local and non-governmental stakeholders have in regards to addressing the needs of the refugees and asylum seekers. For example, at local level, Municipalities with the support of NGOs and volunteers ensure an integrated reception activities that go far beyond the mere supply of accommodation and meals, including many different activities towards socio-economic inclusion. Rosa Añó and Joana Lumbierres from CCAR gave a brief overview of the refugee reception in Catalonia and outlined the differences between the reception and integration systems in Spain. For example, language courses in Spain are considered as part of the reception phase along with basic needs coverage and social and psychological attention, while during the integration phase refugees obtain temporary work permits, have access to pre-training and training workshops and sign agreements with companies.

The second day of the Workshop was opened by Mila Mancheva who presented the structure of the research methodology for mapping the training needs of refugees and the existing mechanisms for training provision. The session was concluded by a discussion about the most relevant research approaches to be adopted in the five countries. In the following session Maria Samara from ELIAMEP and Nadina Christopoulou from MELISSA Network outlined the situation regarding asylum seekers and refugees in Greece and Katerina Stoyanova from CVS-Bulgaria presented and overview of the situation in Bulgaria. The researchers from both teams stressed that opposite to Spain and Italy, the systems in place in the two Balkan countries are more or less fragmented and that they lack clear and easy to follow rules and procedures. However, Ms Christopoulou reported that the Municipality of Athens is actively engaged in supporting the provision of services and activities to the refugee and asylum seeking population in the city. 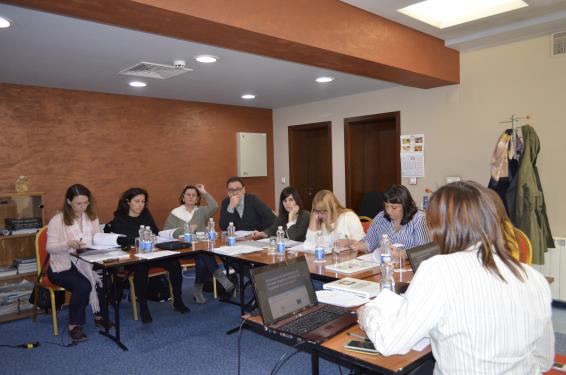 Dr Mila Mancheva, Senior Analyst at the Sociological Program of the Center for the Study of Democracy