Overcoming the energy security risks of Bulgaria and Southeastern Europe including widespread energy poverty, low energy efficiency and dependence on one supplier of oil and gas remains a distant perspective. The diversification of the natural gas supply has stalled and the liberalization of cross-border gas trading is yet to be unlocked. State capture of energy policies by private domestic and foreign state interests has been all too visible and we continue to pay its dues. Russia, for example, has skillfully exploited these governance gaps and lack of capacity to among others sabotage the country’s natural gas diversification including the Interconnector Greece-Bulgaria and the domestic exploration and production of energy resources.

These have been some of the main issues raised during the policy round table Energy Security in Southeast Europe: the Greece-Bulgaria Interconnector, co-organized by the Center for the Study of Democracy (CSD) and the Kondrad Adenauer Foundation on 26 November 2018. Among the speakers were the Chairman of the Parliamentary Commission on Energy, Mr. Delyan Dobrev, the Energy Minister, Ms. Temenuzhka Petkova, the Chairman of the Energy Regulator, Dr. Ivan Ivanov, the U.S. Ambassador to Bulgaria Mr. Eric Rubin, and the Ambassador of Greece to Bulgaria Mr. Grigorios Vassiloconstandakis.

The participants in the discussion united behind several measures for tackling the country’s energy security risks successfully: Bulgaria needs a long-term, consistent strategy for liberalizing the electricity and gas markets, and prioritize critical infrastructure projects such as gas and electricity interconnection lines, gas storage facilities and LNG regasification terminals in cooperation with neighboring countries. Good governance and stable market institutions within the country and in line with agreed EU policies is the only way to be best prepared for the geopolitics of energy, shaped by the big suppliers and consumers, among which Bulgaria is not. This requires a smart approach for freeing enough pipeline capacity on the transmission system for alternative gas volumes from Greece, Turkey and Romania to flow towards bigger markets in Central Europe; the development of a liquid gas trading exchange where all gas suppliers will offer products at equal conditions; and the implementation of a gas regulatory framework that would prevent discriminatory practices. 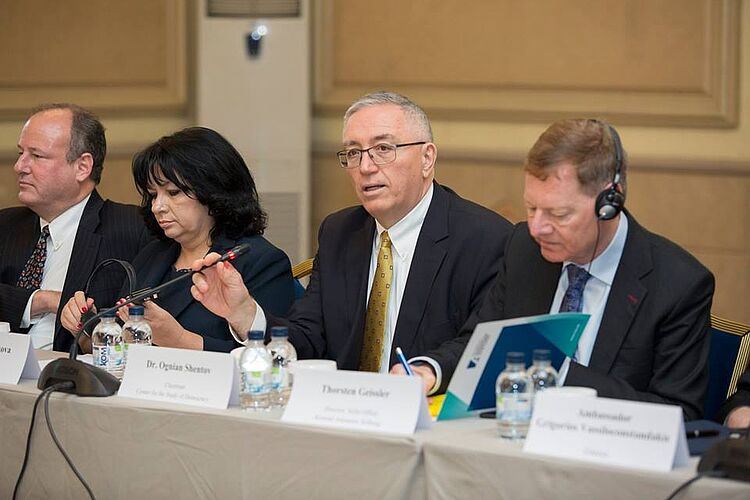 (L-R): Eric Rubin, Ambassador of the United States to Bulgaria, Temenuzhka Petkova, Minister of Energy of the Republic of Bulgaria and Dr. Ognian Shentov, Chairman, Center for the Study of Democracy

Martin Vladimirov, Energy Analyst, Center for the Study of Democracy