The Eighth Anticorruption Policy Forum took place on 21 March 2006 at the Boyana Conference Center. Organized on an annual basis, the Forum is a high profile public event for anti-corruption initiatives, supporting the efforts of civil society and public institutions in the fight against corruption.

The Forum was opened by Dr. Ognian Shentov, Chairman of the Center for the Study of Democracy. Dr. Shentov listed the three key issues in the seventh Corruption Assessment Report On the Eve of EU Accession: Anti-Corruption Reforms in Bulgaria presented at the event: the European context of corruption, which requires profound and systematic reforms aiming to fulfill the EU membership criteria, the analysis of the relation between corruption and organized crime and the view that public-private partnerships are a key resource for countering corruption.

In his address to the participants the US Ambassador John Beyrle stated that the US government supports the Bulgarian EU candidacy and that the Bulgarian and the US governments will continue to be partners in the fight against corruption, organized crime and trafficking of people. Ambassador Beyrle underlined that only the Bulgarian government and society can solve the corruption challenges, while the United States could help with support and advice. He recommended measures against corruption such as denying protection to corrupt officials and impartial assessment of evidence which are successfully implemented in the United States. Ambassador Beyrle pointed out that corruption decreases people’s trust in public institutions. In this context a change of public attitudes is necessary. It could be achieved through greater transparency and active cooperation with the NGO sector, the media and the public; they should demand greater accountability from the government in order to extirpate corruption.

Mr. Alexander Stoyanov, Director of Vitosha Research, presented the main findings in the Corruption Assessment Report and outlined the trends in the corruption situation in Bulgaria since 1998 with a focus on its development in 2005 and 2006. According to the data he presented citizens have become less liable to corruption pressure. After the number of corruption transactions reached a minimum of 80,000 per month in March 2004, there has been a comeback to the higher levels of corruption transactions distinctive for the period 1999–2001. The average monthly number of assessed and conducted corruption transactions in 2005 was 120,000–130,000. Mr. Stoyanov underlined that the “soft” measures for fighting corruption are no longer effective and the government should apply tougher measures such as legislative amendments, improving transparency in the administration, facilitating administrative services to citizens and building public-private partnerships. Special attention should be paid to political corruption. According to the authors of the Corruption Assessment Report only few measures have been taken against this type of corruption, although it is particularly damaging and increases administrative corruption in the business sector, mostly in relation to procurement, concessions, etc.

Mr. Boris Velchev, Prosecutor General of Bulgaria, presented the main issues to be addressed by the Prosecution Office. He pointed out the need for a new set of measures to prevent and punish a crime as specific in nature as corruption. As regards corruption at the high levels of governance, Mr. Velchev emphasized that it would require an independent agency to tackle it, although this idea is still unpopular among legislators. He said that it may be more viable at first to set up a specialized anti-corruption unit directly accountable to the Prosecutor General and to perform a Clean Hands operation aimed at dealing with corruption in the very ranks of the judiciary. Mr. Velchev also underlined how important it is for the Prosecution Office to open up to society and to receive the practical support of the public in the fight against corruption.

Mr. Rumen Petkov, Minister of Interior and Chairman of the Commission for Prevention and Countering of Corruption, reviewed the Bulgarian government’s anti-corruption accomplishments so far. He commended the Strategy for Transparent Governance and Prevention and Countering of Corruption 2006-2008 adopted on 12 January 2006, and the Program for its Implementation, both of which incorporated essential contributions from Bulgarian non-governmental organizations. The Strategy envisages steps such as enhancing public administration accountability, reinforcing transparency and stepping up prevention work. Mr. Petkov declared that the Ministry of Interior has the necessary political will to continue probes of allegedly corrupt public officials and will lend a hand to institutions in all branches of power for the speedier and more effective resolution of corruption cases.

Ms. Ekaterina Mihailova, Member of Parliament and Deputy Chair of the Democrats for Strong Bulgaria expressed concern over the slow pace of reforms and the yet unconstrained organized crime. She maintained that the legislative measures taken since the European Commission's latest progress report were insufficiently effective, particularly the amendments to the Constitution. Parliamentary immunity is still claimed to hide abuses of office and new legislation is needed to introduce ethical norms as well as penalties in case they are violated.

Mr. Levon Hampartzoumian, Chairman and CEO of Bulbank–UniCredit Group presented the view of the business community. He emphasized that the key task of governance is to curtail potential corruption through precautionary measures as prevention methods would be much more effective and less costly than the efforts needed to combat the consequences of corruption. Mr. Hampartzoumian also indicated that Bulgaria should not rely too much or be dependable on the assistance of foreign and international anti-corruption institutions as it is essentially the will and effort of Bulgarian society that can bring about an effective change in the corruption situation in the country.

During the discussion Mr. Assen Dyulgerov, attorney-at-law, underlined that the high budget surplus redistributed at government’s discretion without sanction from the National Assembly is conducive to corruption. According to him, the Criminal Code needs to be further adjusted to European practices and the relevant institutions need to be modernized in order to speed up civil proceedings. The financing of political parties should be made more transparent.

Mr. Tzvetan Manchev, Deputy Governor of the Bulgarian National Bank, focused on the conclusion made in the Corruption Assessment Report that corruption practices tend to decrease rapidly in competitive spheres such as the bank sector. He said that similar reports should contain more examples of good practices as they are a sound basis for corruption prevention mechanisms.

The Resident Representative of the IMF to Bulgaria, Mr. James Roaf, also showed concern over the manifestations of corruption, which is a burden not only to business, but also to the population, especially considering the low competitiveness of the Bulgarian economy and the increasing trade deficit of the country. According to him the government should seek greater effectiveness in the public sector, for example by decreasing the number and increasing the remuneration of civil servants, by enhancing transparency and achieving concrete results in areas key for competition such as the introduction of a unified commercial register, etc. These measures will diminish budget losses and improve the efficiency of public services.

According to Mr. Stamen Tassev, Executive Director of the Bulgarian Business Leaders Forum, the fight against corruption takes time, therefore the next generation’s attitude towards the problem should be changed by introducing the subject of business ethics in the curriculum. Mr. Tassev also recommended to decrease cash payments in order to generate transparency in transactions.

Mr. Pasquale Ferraro, former Deputy Director General of the International Development Law Institute and consultant to the United Nations Development Programme, commended the Corruption Monitoring System developed by Vitosha Research and the Center for the Study of Democracy. He stressed that it has been internationally recognized, being adopted in seven countries from the region and acknowledged by the United Nations. According to him Bulgaria should continue to seek and learn from the best practices and expand public-private partnerships for anti-corruption.


Mr. Philip Dimitrov from the parliamentary group of the United Democratic Forces stated that the conflict of interest at the highest levels of governance is the most important issue on the political agenda. The need of corruption prevention measures was once more highlighted by Mr. Bojidar Bojinov, President of the Bulgarian Chamber of Commerce and Industry. He argued that discussions and consultations between the government and industry associations in Bulgaria are insufficient, which leads to inadequate decision and law-making.

Mr. Tzvetan Tzvetanov, Deputy Mayor of Sofia, also criticized the policy-making process which excludes local authorities. Mr. Atanas Atanasov, member of the parliamentary Combating Corruption Committee, noted that the committee should be chaired by the opposition in order to function effectively and its members should not be appointed proportionally. Mr. Ginio Ganev, National Ombudsman of Bulgaria, focused on the need of stronger parliamentary and civil control over the executive and the legislature. He maintained that the public’s attitudes should be changed and that civic initiatives for countering corruption should be promoted. 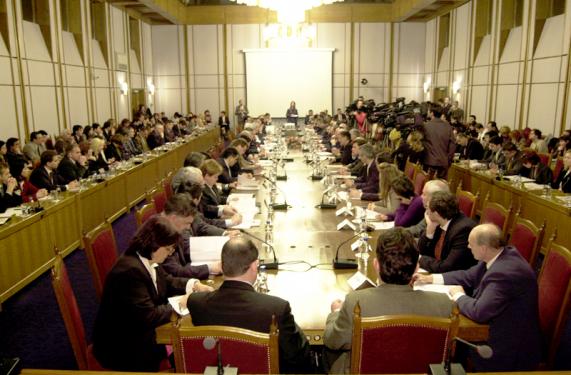 From left to right: Mr. Roumen Georgiev, Chairman of the Chamber of Investigators; Mr. Stoyan Stalev, Executive Director of InvestBulgaria Agency; Mr. Dimitar Abadjiev, Deputy Chairman of the Parliamentary Group of the Democrats for Strong Bulgaria and Mr. James Roaf, Resident Representative of the IMF to Bulgaria 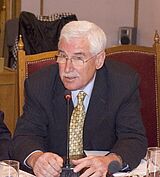 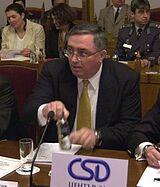 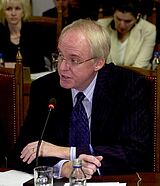 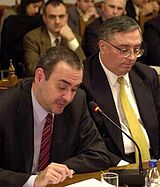 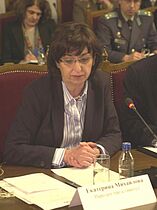 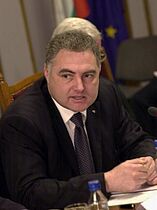 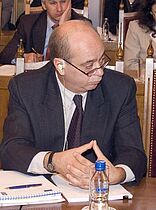 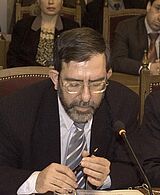 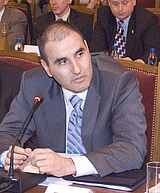 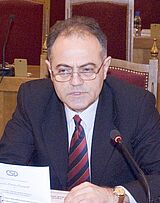 Participants in the Forum

On the Eve of EU Accession: Anti-corruption Reforms in Bulgaria
Related