On 24 October 2019 the Center for the Study of Democracy hosted a roundtable on economic sectors and the fight against human trafficking (NET-COMBAT-THB-CHAIN). The event was co-organised with the National Commission for Combatting Trafficking in Human Beings (NCCTHB) and brought together representatives of the judiciary and law enforcement bodies engaged in prevention and repression of trafficking, experts from trade unions and business organisations, as well as from civil society.

Dr. Maria Yordanova, senior fellow in the Law Program of the Center for the Study of Democracy, and Kamelia Dimitrova, NCCTHB secretary, marked the opening of the roundtable by emphasising the importance of countering human trafficking for labor exploitation, the necessity for prevention and the need to raise more awareness and improve coordination among all stakeholders.

Miriana Ilcheva, senior analyst in the Law Program of the Center, introduced the initiative, which the roundtable featured, devoted to the cooperation between anti-trafficking stakeholders and economic sectors to combat trafficking in supply chains (NET-COMBAT-THB-CHAIN). The initiative is undertaken by a consortium of organisations from five EU Member States and involves strengthening the cooperation between business actors and other institutional and organizational stakeholders to combat human trafficking. A report on the links between business sectors and labor exploitation, as well as a toolkit for economic sectors to combat human trafficking have been produced as part of the initiative.

Dobryana Petkova, chief expert with the NCCTHB, focused on the legal definition and components of trafficking in human beings, as well as the importance of differentiating trafficking from other, similar criminal phenomena. Further, Ms Petkova introduced an analysis of EU case law related to human trafficking, specifically in the context of labor exploitation, as well as criminological data about trafficking and the importance of cooperation with the private sector for achieving better prevention.

Subsequently, Anton Kojouharov, analyst in the Security Program of the Center for the Study of Democracy, presented the initiative FLOW, which focuses on the flow of illegal funds and victims of human trafficking for labor exploitation. The initiative’s goals are to provide support to the law enforcement bodies, to raise awareness about labor exploitation amongst the business sector, to make victim identification more efficient and to include trafficking prevention as part of corporate social responsibility policies.

Gabriela Dimitrova, director of International Cooperation and International Organisations at the Bulgarian Chamber of Commerce and Industry, presented ‘ERIAS – the European Refugee Integration Action Scheme’ and its implementation in Bulgaria. According to Ms Dimitrova and the Chamber’s research, most Bulgarian companies do not have significant experience with hiring foreigners. Good qualification, experience, a certain command of Bulgarian language and the desire to integrate in Bulgaria in the long-term are some of the key characteristics that Bulgarian employers seek in a foreign applicant.

The Raise Up project of the Federation of the Independent Agriculture Unions was presented by Atanaska Todorova, senior expert ‘Labor market’ at the Confederation of Independent Trade Unions in Bulgaria. The project focuses on field-work activities and implementing innovative approaches in the engagement of stakeholders to combat undeclared work in the agriculture sector.

Dimitar Zlatanov from CATRO Bulgaria focused on the importance of recruitment agencies in the prevention of human trafficking. Mr Zlatanov presented some recommendations designed to improve the quality of service of such agencies when it comes to combatting human trafficking and not becoming a passive actor in the materialization of the crime.

Stefan Ralchev, chief expert at the NCCTHB, touched upon the importance of the Internet in combatting human trafficking and the prevention strategies that come with it. According to him, the importance of the Internet is twofold – on the one hand, the Internet gives a lot of new possibilities to traffickers to execute their activities and attract victims and, on the other hand, law enforcement bodies are also offered opportunities to combat this criminal phenomenon. In addition, the Internet is an important medium in the information and awareness raising campaigns against trafficking.

Miriana Ilcheva additionally presented the information and communication campaign, an integral element of the NET-COMBAT-THB-CHAIN initiative, realized together with the partner-organizations through the use of visual messages in social media.

The event concluded with a discussion in which representatives of various other institutions and organizations shared their views. Overall, emphasis was put on the necessity of more cooperation between all stakeholders when it comes to the prevention and combatting of human trafficking. Further, participants agreed on the importance of the reaching the goals set in countering human trafficking through practical activities and tangible results. 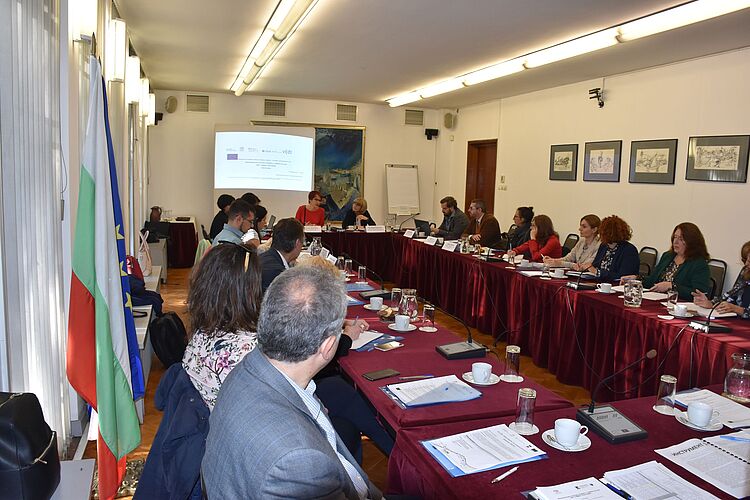 During the round table 'Economic sectors and the fight against human trafficking', Sofia, 24 October 2019

Gabriela Dimitrova, director of International Cooperation and International Organisations at the Bulgarian Chamber of Commerce and Industry

During the roundtable on economic sectors and the fight against human trafficking (NET-COMBAT-THB-CHAIN), 24 October 2019, Sofia

The participants in the roundtable on economic sectors and the fight against human trafficking (NET-COMBAT-THB-CHAIN), 24 October 2019, Sofia

The participants in the roundtable on economic sectors and the fight against human trafficking (NET-COMBAT-THB-CHAIN), 24 October 2019, Sofia
Related