On February 28, 2003 the Center for the Study of Democracy held a round table discussion on Dumping Practices, Contraband and Corruption: Challenges and Solutions. The round table aimed to encourage a public debate on the problems of illegal import in violation of the Bulgarian and the European legislation and to outline the necessary measures for limiting these practices. Representatives of the Customs Agency, the Ministry of Interior and experts from non-governmental and business organizations took part in the discussion.

During the opening of the round table the Director of the Customs Agency Mr. Assen Assenov, and later his colleague Mr. Roumen Danev, Director of the Customs Intelligence and Investigation Department at the Customs Agency, highlighted the graveness of the administrative problems and the necessity to improve the legislative norms. As an example Mr. Assen Assenov pointed out the fact that there were 14 000 law violations registered in 2002, e.g. 30-40 per day. He appealed to the other institutions for a constructive dialogue on the problem.

Mr. Emil Tzenkov, Coordinator of the Trafficking and Corruption Expert Group at CSD, underlined the necessity for more precise legislative definition of these problems.

Professor Dimitar Hadzhinikolov, Lecturer at the University for National and World Economy, explained the antidumping duty procedure and the ways for the real value of the goods to be calculated.

Ms. Diana Marinkieva, Chair of the Association of the Light Industry Companies, cited various data about the Bulgarian export and the number of firms bankrupted in the sphere of light industry (about 4000 for year 2002). She recommended a change in the Law for Protection of the Competition and the tax laws because currently 80% of the Bulgarian firms in the light industry were operating in the grey sector. In her opinion, the non-regulated import of cheap goods was the main threat. Mr. Yordan Vassilev, Chairman of the same association made several suggestions for solving the problem - for example new requirements, future agreements about the domestic market, establishment of an "average prices" nomenclature.

Mr. Ivan Galabov, Expert at the Bulgarian Chamber of Commerce and Industry, suggested closer collaboration and online exchange of information between the customs, police and taxation authorities.

Ms. Detelina Krusteva, Director of the Economic Analyses and Domestic Market Department at the Ministry of Economy, said that a balance should be found between the preferences for the Bulgarian firms and the restrictions for the importers, because these would be in force for both sides in the same degree.

Particularly interesting was the speech of Mr. Volodya Todorov, President of the Hat-Trick Enterprise, presenting manufacturers' point of view.

At the end of the first session Mr. Assen Assenov cited data about the import and duties gathered during 2001 and 2002. The comparison between these years was particularly encouraging. 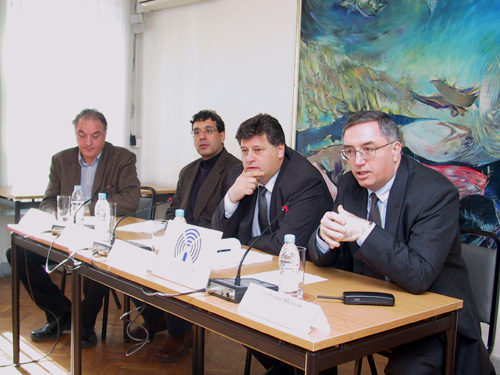 Participants in the round table
Related