Discussion: The Present and the Future of Russia’s Oil and Gas Policy

Discussion: The Present and the Future of Russia’s Oil and Gas Policy

On 30 October 2014 Dr. Mikhail Krutikhin, Senior Partner of the RusEnergy consultancy gave an in-depth presentation of the most recent trends in the management of the Russian hydrocarbon sector. He identified that the oil and gas sector is vital for the financial survival of the Russian economy, as according to national statistical data, the share of the hydrocarbon revenue in the overall Russian budget has increased from 9% in 2000 up to 52% in 2014. For the last 14 years since the start of Putin’s regime, the government has disregarded the development of other economic areas making the Russian economy inflexible to fluctuations in energy prices and market volatility.

The discussion was divided in a crude oil and a natural gas section, followed by three scenarios for the development of Russia’s foreign policy and its relations with the West. Some of the conclusions pointed to the permanent existence of state capture practices in Russia’s hydrocarbon sector. The growing influence of few individuals in energy decision-making has led to major inefficiencies that have undermined the country’s future economic development.

In crude oil, new field discoveries have been very small ranging from 3 to 5 million tons of proven reserves. In addition, the new fields have been located far from the major transport and refinery infrastructure making their development very expensive. Due to the low pace of oil exploration and the declining crude output, the amount of easy oil has been in steep decline. The alternative ultra-light tight oil reserves in the Bazhenov play, which have been boasted by the government as the new horizon of the Russian oil sector, will require massive investment from Rosneft and the import of advanced Western technology, which is currently under international sanctions. Unlike the US, there are no small, local pioneer companies in Russia that are able to develop the drilling methods and technologies needed for the development of the tight reserves, which require hydraulic fracturing and horizontal drilling methods. In addition, the large companies do not have the incentive to invest in new technologies as close to 80% of their production operations are taxed by the central government.

Meanwhile, foreign oilfield service companies have been banned from working at onshore fields in Russia. Moreover, under Russian law, if foreign oil operators discover a large crude oil field, they are obliged to transfer the ownership of the field to the state, diminishing the incentive for foreign companies to lead exploration activities in harder-to-reach geological formations. According to information by Lukoil, around 15% of Russia’s current output is dependent on foreign technology. Moreover, at the current pace, the country’s oil output has already plateaued and will start declining in 2015. Dr. Krutikhin claimed that unless the tax regime is reformed, by 2020 Russia could lose as much as 15% of its current daily production, which is currently standing at a bit above 10 million barrels.

According to Mr. Krutikhin, the situation in the natural gas sector is very similar. One observes that the largest gas fields stemming from Soviet times such as Urengoy and Yamburg reveal large depletion patterns as underground pressure is decreasing, and Gazprom has to constantly invest in the construction of new compressor stations. Furthermore, the production and transportation costs for the natural gas from the Eastern Siberian fields have already reached more than USD 100 per 1000 cubic meters. At the same time, shrinking demand in Europe has seen Russian gas exports decline in the past 5 years, while markets in the Far East are flooded with gas supply from producers in the Middle East, Africa, Australia and Southeast Asia.For the Russian LNG at the planned Vladivostok terminal to be competitive, prices in Asia have to remain at least USD 16 per MMBtu. With China working with new gas suppliers from Central Asia and expanding its domestic production capacity, Mr. Krutikhin fails to see how China would become a major customer of Russian gas in the future.

That is why Dr. Krutikhin does not think that the Russia-China export agreement is commercially viable. In his opinion, the 38-bcm gas contract does not yet have a price tag but estimates show that the development of the Eastern Siberian fields and the construction of the pipeline may cost over USD 100 billion. In order to finance the Eastern Gas Program, Gazprom’s annual investment budget until 2018 would have to double equaling between USD 9-10 billion per annum. The Russian giant has already started saving some cash by slowing down its Yamal upstream gas development and decreasing the capacity of the Bovanenko pipeline ensuring the supply of the Nord Stream pipeline.

On the European front, the US shale gas revolution and the Ukrainian crisis have all diminished the attractiveness of Russian natural gas on European markets. Gazprom continues demanding a monopoly role for itself in Europe including on the OPAL and South Stream pipelines, where the European Commission insists on the implementation of the Third Energy Liberalization Package, stipulating that the ownership of production and transportation assets has to be unbundled, and that third-party access to the transmission network should be ensured.

Gazprom would have to accept the Third Energy Package if it wants to complete the South Stream pipeline. On this point, Dr. Krutikhin commented that Gazprom tends not to make concessions during negotiations, and abandons ideas for a win-win resolution of a conflict. In addition, Russia is insisting on long-term contract with oil-indexed prices for Europe. As the share of lower spot prices at European gas hubs has been dramatically increasing in the last five years, many companies importing Russian gas have required Gazprom to adopt price reductions or spot-pricing contracts. The Vienna court of arbitration has already decided that Gazprom should pay USD 1.6 billion to RWE for gas deliveries at non-competitive prices.

Russia’s oil and gas sector is facing serious difficulties in maintaining the current level of oil and gas output and exports. Many of the future developments in the Russian energy sector are likely to depend on a combination of foreign policy decisions and the current domestic regulatory framework. Among the most important conclusions are that:

In his analysis, Dr. Krutikhin pointed that the amalgamation of Russian political and economic troubles could lead to three distinct scenarios:

No matter, which future road, Russia takes, one thing is certain: economic mismanagement and creeping authoritarianism have never produced growth and prosperity. However, Russia’s economic influence is yet to stay in Central and Eastern Europe, and its ability to take over domestic policy should not be underestimated. Instead, according to Dr. Krutikhin, the region should try to decrease its energy dependence on Russia by diversifying supplies, build regional interconnectors, pressure Russia into renouncing the oil-indexed contracts and last, but not least, create a common energy policy. 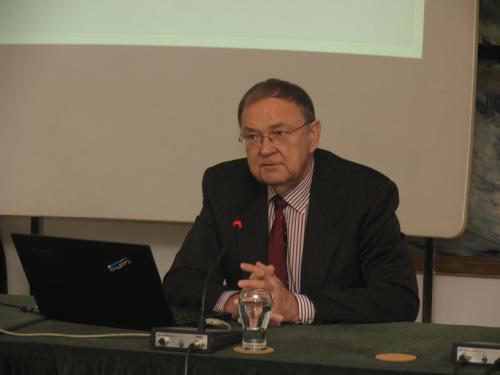