On 19 June 2014 experts at the Center for the Study of Democracy held a meeting with a delegation of the Labour and Social Affairs Committee at the German Bundestag. The discussion focused on the causes and effects of labour migration from Bulgaria to Germany with a view to future political actions of the German Parliament.

Ms. Katja Mast, Head of the delegation, clarified that they are interested in the problems with migration of the Roma population and in particular, Bulgarian government's strategy for their integration. The protection of labour and social rights of Bulgarian citizens working in EU countries was another issue of interest emphasized by the delegation. Ms. Mast expressed concerns that the growing labour migration among the highly qualified specialists can, in the longer term, have negative impact on the economic and social development of Bulgaria.

Ms. Mila Mancheva, Senior Analyst at the Sociological Program, gave a brief overview of the emigration processes in Bulgaria in the past 24 years. The statistical studies show that the percentage of working-age Bulgarians who left the country before 2007 is almost twice as high as the number of those who left after the accession of Bulgaria to the EU.

Mr. Tihomir Bezlov, Senior Analyst at the Security Program added that two larger emigration waves could be distinguished during the period of transition - one in the early 90s and one in 2001-2003, when the Schengen visa restrictions were removed. Until the beginning of the crisis the main destination countries for migrants were Spain and Greece, but after 2008 Bulgarian citizens prefer the countries in Northern Europe. The Bulgarian citizens of Roma ethnicity find employment mainly in grey economy sectors.

With regard to the reasons for the emigration of highly skilled people, Mrs. Mancheva explained, that Bulgarians find more career opportunities and better remuneration in Western countries. Mr. Bezlov added that there are not yet official statistics on the number of highly qualified Bulgarian emigrants, but a fair assumption could be made on the basis of the significant number of Bulgarian students in Western universities.

Ms. Brigitte Pothmer, Member of the delegation, was interested how the outflow of highly educated Bulgarians has affected the democratic processes in the country and the development of civil society. According to Ms. Mancheva, as a result of increased immigration processes since 1989, most of the active civil society was not in the country to exert more pressure and control over the institutions of the executive and legislative power. In this sense, it is fair to assume that the open borders and the opportunities outside the country were one of the factors that affected the democratic transition of the country. Ms. Iva Alexandrova, Senior Analyst at the Sociological Program, noted that one should not overlook the fact that migration is not a one-way and irrevocable process and that many Bulgarians have returned. In addition, with the experience and skills these people have gained abroad, they bring a new dynamic to the development of Bulgarian society.

Ms. Daniela Kolbe, Member of the delegation, brought back the topic of Roma migration with emphasis on what measures are taken at national level and what strategy is implemented for the integration of this minority. Mr. Philip Gounev, Security Program Director, explained that strategies are present, but they often lack specifically drawn up actions for achievement of these integration goals. In the majority of cases, only sporadic actions are taken at local level.

Ms. Alexandrova clarified that the main issue is the poor socio-economic situation in the country, which affects mainly the marginalized groups of the society and hinders their integration. When there are running local industries and job opportunities for low-qualified personnel, the integration measures can be successful. As a part of project aimed at involving the Roma community in the study and prevention of new forms of child trafficking, we were able to see that in fact, there are many examples of successful cooperation with the community when its representatives are adequately involved in the implementation of such projects. 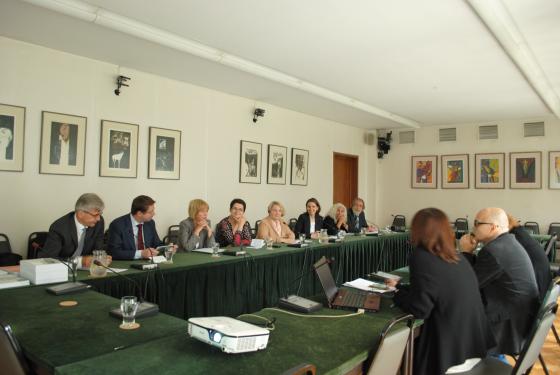