Russian influence in the media sectors of the Black Sea countries has become more visible in recent years and has been established through the deployment of a diverse set of instruments. Some of these instruments include the establishment of financial dependencies especially on the basis of ownership; political support for pro-Kremlin domestic media; the utilization of organizations outside the media sector - such as commercial companies, NGOs, educational and cultural institutions for agenda-setting; the exploitation of the Black Sea countries’ governance deficits to prevent media transparency and freedom; the conferral of honors and awards on pro-Russian media and their staff; the use of hybrid warfare tools such as fake news and internet trolling.

In order to address the challenges stemming from Russia's media influence, the Center for the Study of Democracy organized an international policy roundtable on 4 September 2018 in Kyiv, Ukraine, which brought together policy-makers, media experts, journalists and representatives of civil society organizations. The participants discussed the main findings, conclusions and policy recommendations of a recently published regionally comparative study titled 'Russian Influence in the Media Sectors of the Black Sea Countries: Tools, Narratives and Policy Options for Building Resilience', further putting forward their own ideas and suggestions for dealing with Russian propaganda.

In the opening session of the event, Ms. Julia Kazdobina, Advisor to Ukraine's Minister of Information Policy, pointed out that Ukraine was the first country to experience the full force of Russian tools of influence on public opinion - Moscow captured Crimean media and Russia-linked Ukrainian media, thus attempting to make Crimeans distrustful of Ukraine and of the rest of the world. Hence, it is difficult to devise a policy response because Russia is developing its own broadcasting infrastructure, jamming Ukrainian signals. The most promising way forward is contained in the employment of a strictly analytical-investigative approach to the question of Russia's media influence. Dr. Roman Shutov, Strategic Advisor for the Partnership Programme, Baltic Centre for Media Excellence, Ukraine/Latvia, directed attention to the fact that truth is being weaponized by the Kremlin. Indeed, the most dangerous form of propaganda is hidden behind seemingly professional journalism that ostensibly follows standards of impartiality, whereby one can hide behind patriotic and anti-Russian narratives and still subtly disseminate pro-Kremlin messages. So the best way to combat such messages is to apply rigorous content analysis.

The first panel of the roundtable was dedicated to the presentation and discussion of the findings of the regionally comparative study. Dr. Todor Galev, Senior Analyst at the Center for the Study of Democracy, introduced the economic and political tools (including state capture instruments, corporate presence, media propaganda and disinformation, geopolitical pressure) that the Kremlin has used to reinforce the governance deficits in the Black Sea countries. He focused on the links between media ownership and anti-Western propaganda as essential forms of Russian malign influence in the region, outlining the instruments and mechanisms for direct and indirect support to both Russia-owned and domestic pro-Russian media. Dr. Roman Shutov presented the characteristics of pro-Russian propaganda in Ukraine, stressing the employment of shocking, emotionally manipulative images and the coverage of glaringly untruthful information. Dr. Rumena Filipova, Research Fellow at the Center for the Study of Democracy, emphasized the commonalities of pro-Russian narration and style of dissemination shared by the selected media outlets in Bulgaria as a function of these outlets' general pro-Russian tilt. She also focused on the differentiations in propagandist discourse and transmission techniques, conditioned by the different degrees of the political-economic enmeshment of the outlets with pro-Kremlin groups and interests. Ms. Sopho Gelavaand Ms. Ana Chitaladze, Researchers at the Media Development Foundation, Georgia, provided an overview of the Russian liaisons of the selected media sources in Georgia, spelling out the effects of these liaisons on news coverage. An important caveat concerned the fact that in respect of the energy theme, the portrayal of Moscow is not unequivocally positive given Tbilisi's efforts at energy diversification. Mr. Gegham Vardanyan, Editor in Chief of the Media Initiatives Center, Armenia, stressed the overwhelmingly favorable coverage of pro-Russian narratives, use of Russian sources and positive attitudes to the Kremlin not least due to the specificities of the Armenian media landscape, including the popularity of the Russian language and accessibility to Russian TV. Mr. Simion Ciochina, Communication Manager at the Institute for European Policies and Reforms in Moldova, focused on the common trends of pro-Russian propaganda shaped by the heritage of Soviet-descended media links to Russia, the popularity of the Russian language and the establishment of political control of the press.

The general discussion following the presentations was marked by two important queries. The first concerned the issue of the actual impact of the established Russian propaganda on public opinion and domestic political discourse. The second was related to the unexpectedness of the heavy coverage of the Syrian topic in the Bulgarian case, which was explained as evidence of the imposition of pro-Russian narratives on the Bulgarian public that may not necessarily be so interested in the Syrian conflict. The only two locally-relevant topics covered with regard to Syria include the issue of Bulgarian weapons supplies to the rebels and the possible dissemination of violence from Syria to Southeastern Europe and the Baltic states.

Subsequently, elaborations of concrete, analytically- and experience-based proposals for tackling anti-Western propaganda followed. Ms. Liubov Tsybulska, Deputy Director of the Hybrid Warfare Analytical Group, Ukraine Crisis Media Center, argued that the main element in Russian propaganda is related to narratives, which feed into culturally established beliefs and values (of Russia as a country with a proud imperial history, of the Russians as victims of external aggression), which cannot be easily defeated. That is, combating Russian propaganda cannot be just about revealing the truth, as the narratives play into the national psyche. Dr. Andreas Umland, Senior Research Fellow at the Institute for Euro-Atlantic Cooperation, directed attention to the problem of 'dis-balance'. The most effective form of disinformation has been the exaggerated presentation of truthful information about Ukraine, which is dis-balanced from more positive information about the country. Moreover, he argued that the Western discussion of Russian influence emphasizes the confrontation between democracy and authoritarianism, the continuation of the Cold War, the possibility of a World War 3. This is too dramatic and leads to policy mistakes as the question is more about the kleptocracy of the Russian political class. Dr. Umland also noted that Russian social networks are insufficiently used by Westerners. Dr. Volodymyr Yermolenko, Director of European projects, Internews Ukraine, pointed out that we already know the key features of Russian propaganda so the next step is to start being pro-active about combating it. Information is being weaponized and therefore the corresponding approach should be disarmament. Also, it is a false dilemma to decide whether fake news or narratives should be addressed first. Both should be tackled because our minds gather facts, which need to be united by narratives to become comprehensible. Useful ways of combating propaganda include due diligence of the financial ties of pro-Russian outlets, naming and shaming, applying sanctions.

As regards the EU's role in tackling Russian propaganda, Latvia's experience was hailed as a positive example in that Riga was the first to call attention to the question of disinformation and the European Commission came up with corresponding initiatives. The EU's Eastern Partnership program was suggested to be used more actively as a platform through which the partnership countries can play the role of 'experts' on Russia within the EU, given their historical intertwining with and deep knowledge of Moscow. On the other hand, a warning was sounded that the EU's initiatives on countering disinformation are treated as issues of diplomatic concern rather than as internal problems for the Union. Also, the EU underestimates the security dimension of Russian propaganda, while Ukraine overestimates it so a proper balance should be found between a focus on security vs. freedom. Finally, it was argued that it is paramount to disseminate the findings of studies on Russian propaganda to Western countries, such as Italy, that are more prone to accept Kremlin narratives. Disinformation has become a global topic, which represents a perfect opportunity to transcend national boundaries in dealing with this matter.

Finally, a capacity-building exchange for journalists, bloggers and CSOs featured talks that provided a wider treatment of issues related to Russian influence. Dr. Rumena Filipova presented The Kremlin Playbook (a joint CSD-CSIS publication), which establishes a relationship between Russia's economic footprint and the deterioration of democratic standards in Central and East European countries, charts out the vulnerable sectors of CEE economies where Moscow is dominant, clarifies the amplifiers of the Kremlin's economic leverage and puts forward policy recommendations for tackling this leverage. Dr. Todor Galev introduced a media content analysis toolkit, whose aim is to trace, reveal and map Russia's financial and corporate ties to the domestic media outlets of other states as avenues for exercising and channeling media influence through propaganda.

The discussion fleshed out participants' own observation of the link between Moscow's economic influence and the deterioration of democratic standards. For instance, it was pointed out that in Ukraine the Russian language is heavily promoted as a business strategy. It was also stressed that a counter-argument to the one put forward in the Kremlin Playbook refers to the presence of a weaker threat coming from Russia that may not be guided by a concerted Russian political strategy. It was responded that observations about the overrepresentation of the Russian threat depend on the (recent) historical context. Now it may seem that as concern about Russian policy has increased, analyses have also been focused on that direction, but back in time when the study was devised and especially in 2008, CSD was warning about the insufficient attention paid to the malign effects of Russian policy. This was not immediately heeded, with the 2009 letter to Obama on the part of CEE leaders being an important first step. Indeed, the key consideration was that once CEE states acceded to the EU and NATO, this did not completely mean that Western allies could be assured of the 'positivity' of economic and political trends in those countries. Just like cultural paradigms and visions of national identity can return and be enacted cyclically, so too Russia was gradually making a comeback in the region, which was no trivial matter. 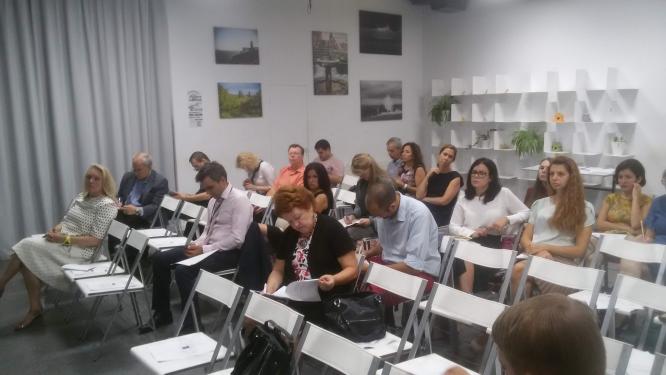 The participants during the international policy round table 'Diagnosing and Countering Russian Influence and Media Capture in the Black Sea Countries', Kiev, 4 September 2018

During the international policy round table 'Diagnosing and Countering Russian Influence and Media Capture in the Black Sea Countries', Kiev, 4 September 2018

The speakers during the international policy round table 'Diagnosing and Countering Russian Influence and Media Capture in the Black Sea Countries', Kiev, 4 September 2018

The participants during the international policy round table 'Diagnosing and Countering Russian Influence and Media Capture in the Black Sea Countries', Kiev, 4 September 2018
Related