Professor Hongjun emphasized that in recent years Chinese researchers have paid special attention to the transition experience of the countries from the former Soviet Union and Eastern Europe. He mentioned two issues of particular interest: Bulgaria's privatization and its impact on the nation’s economic development, and policies in the public health sector.

Dr. Ognian Shentov, Chairman of the Center for the Study of Democracy, welcomed the visit of the delegation as the beginning of long-term cooperation between the two research institutes. He pointed out that Bulgaria had an uneven record in its transition efforts, including as it relates to privatization and health care. CSD has closely followed the transformation of Bulgarian society over the past twenty years, and is in a position to both both highlight and help transfer best practices and successful reform initiatives, as well as provide examples of measures that have proved inadequate.

Dr. Maria Yordanova, Director of the Law Program at CSD, briefly presented the main efforts focusing on the legislative and judicial reform process from the very beginning of the transition - during Bulgaria’s pre-accession period as well as subsequent to EU accession. She pointed out CSD’s contributions to legislative reforms, in particular with respect to the elaboration of the new Constitution and public debates relating to that; business and trade-related legislation; with respect to the law on electronic signatures and electronic documents; the concept paper on registration reform and the law on the business register; regulations on avoiding conflicts of interests of civil servants ; the introduction of the ombudsman institution at the national and local levels; monitoring the work of and strengthening the capacity of the judiciary, its role in prosecuting crimes and corruption and in guaranteeing security and democratic values. Dr Yordanova explained that CSD relies in its work on partnership with the Bulgarian governmental institutions and business organisations, as well as on international cooperation.

Mr. Ruslan Stefanov, Director of the Economic Program at CSD, discussed the role of the Center in shaping the country's policies on privatization, energy and the hidden economy, and how these relate to China’s economic development and policies. He noted that China shares many common traits with Bulgaria with respect to the causes and characteristics of the hidden economy. He presented the Center’s annual Hidden Economy Index and proposed that China could also develop such an instrument to keep track of the country’s burgeoning grey economy and its effect on private sector development. He expressed the opinion that Bulgaria’s choices on the development of renewable energy sources depend very much on whether and how fast China’s vast investments in green energy technologies will bring costs down. Finally, in its transition, Bulgaria has experimented with all known methods of privatization and the lessons learnt could be valuable for China’s plans for further privatization. 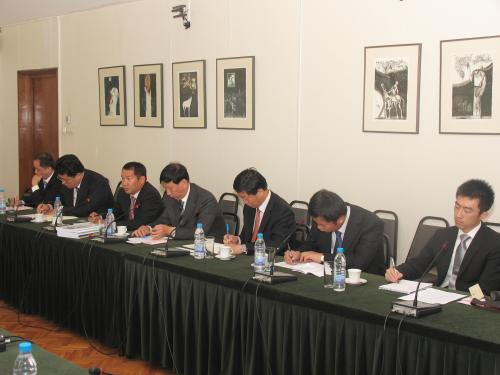 The delegation from the China Center for World Contemtorary Studies (CCWCS)

Professor Yu Hongjun, President of CCWCS and Vice Minister of the International Department of the Central Committee of the Communist Party of China

Dr. Ognian Shentov, Chairman of the Center for the Study of Democracy (right) and Dr. Maria Yordanova, Director of the Law Program at CSD

The participants in the meeting