Despite the legislative and institutional progress, especially in terms of increased transparency and access to data, the public procurement (PP) sector in Bulgaria continues to be associated with high levels of corruption risk. The number of irregularities uncovered by the control bodies remains considerable. At the same time there is a lack of effective investigation, while criminal cases, involving PP, are still very limited and predominantly focused on the lower levels of governance. These were some of the overall conclusions among the participants at the round table “Defrauding the Bulgarian public procurement system: prevention, countering and analysis of corruption risks”, organized by CSD on 31 October 2016.

Dr. Ognian Shentov, Chairman of the Board of the Center for the Study of Democracy, highlighted the existing challenges in the public procurement sphere. According to Dr. Shentov, there is a strong need for more systematic approach and concrete, actionable measures for countering fraudulent activities in the sector, because public procurement is characterized by complex corruption practices and dependencies, which ultimately lead to state capture. Integration of independent monitoring system in the sector will be an important step to addressing the existing corruption risks in a more comprehensive manner.

Tomislav Donchev, Deputy Prime Minister for European Funds and economic policy, acknowledged experience and valuable contribution of CSD through the years. Mr. Donchev highlighted the progress in the area of public procurement, mainly with regards to the latest legislative advancements and the drive to continue the electronization of the system. According to Mr. Donchev, the main challenge has to do with the allowing for market distortions and creating false economic incentives. The effective control and prevention are key but ultimately the focus should be put on sustaining a competitive economic environment.

Ruslan Stefanov, Director of the Economic program at CSD, presented the most recent trends, dynamics and the most pressing risks in the area of public procurement. There is a clear trend of sustaining very limited number of criminal cases, which do not reach the higher echelons of power. The fluctuations in the public procurement sector are often tied to political cycles, while at the same time the number of irregularities remains significant. Mr. Stefanov also discussed the role of the European financing in the Bulgarian public procurement landscape, highlighting that EU Funds gradually expand their share in the overall PP market. Public procurement, financed by the EU, is both more competitive and risk averse – analysis by CSD found the exclusively state-funded PP is up to four times more vulnerable to corruption, compared to EU funded procurement.

Stefan Karaboev, Analyst at CSD, discussed the main public procurement trends in the infrastructure sector. The 2010 – 2015 period saw notable increase both in terms of number of contracts and of value. The concentration of PP contracts is visible on macro, as well as on micro level, as the value of contracts, awarded to the top 40 construction companies (by turnover), peaked to 62 % of the overall PP value in the sector (23 % of the total PP market value). In the meantime, as the Bulgarian construction companies are becoming increasingly dependent on public funds (predominantly EU) for their survival, there is an increased corruption pressure upon the public administration. The market concentration of public procurement raises important questions with regards to the competition in the particular sector. In conclusion, Mr. Karaboev made a review of CSD`s most pressing recommendations in the PP sector, including the need for increasing the effectiveness of criminal prosecution; adopting active measures for increasing the effectiveness of the existing control mechanisms; integrating preventive instruments against market concentration in key economic sectors; and introducing independent system for assessing the enforceability of anticorruption policies on institutional level.

Emil Dechev, Judge, Criminal Division of the Sofia City Court, confirmed that the very limited number of criminal cases involving PP seem suspicious in the context of the large volume of uncovered irregularities in the sector. According the Mr. Dechev, the reasons for the existing status quo are mainly related to the complexity of investigating and prosecuting PP offences, the lack of experience and capacity, as well as the existence of political protection and inactiveness of the law enforcement institutions. Aneliya Yordanova, Director of the "Analysis and reporting of inspection activities" Directorate at the Agency for State Financial Inspection (PFIA), discussed the common administrative aspects and types of irregularities in the PP market. Municipalities continue to be subjected to financial inspection more often than any other type of administrative structures in the country.

Dr. Todor Galev, Senior analyst at CSD, presented selected methods for monitoring and analysis of corruption risks in the area of public procurement. Special attention was paid to the issue of automated red flags information systems. Implementation of risk assessments in real time, within each of the PP stages, and classification of potentially risky procurements, according to the number and type of the identified risks (red flags), will facilitate the prioritization and the adoption of follow-up measures. 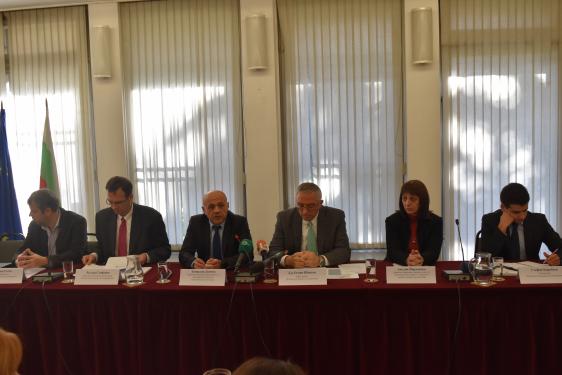