In the context of the increased refugee inflows since 2014 the EU Member States had to design and implement practical solutions to address the gaps in their reception and integration systems. In the second half of 2018 the situation with refugee intake in some EU states has undergone changes, with Italy shifting its heretofore favorable integration approach towards refugees and Spain undergoing a much larger inflow of migrants than in recent years. Simultaneously, such changes in Italy and Spain coincide with decreased inflows of refugees moving through Bulgaria and Greece.

On February 7-8, 2019, the Center for the Study of Democracy hosted a seminar discussing the outcomes of pilot trainings for cultural and civic orientation and integration of women, beneficiaries of international protection in Bulgaria, Greece and Malta. The seminar gathered participants from policy institutes and service providing organisations in the asylum and migration field in five EU member states. It was part of an international initiative running since 2017 between the Center for the Study of Democracy (Bulgaria), the Hellenic Foundation for European and Foreign Policy (Greece), Melissa: Network of Migrant Women in Greece (Greece), the People for Change Foundation (Malta), Comissió Catalana d’Ajuda al Refugiat (Spain), Fondazione Centro Studi Investimenti Sociali (Italy) and Cooperation for Voluntary Service – Bulgaria.

Seminar participants presented the thematic focus, the training methods and the general training approaches of the national modules for cultural and civic orientation of women beneficiaries of international protection developed in Bulgaria, Greece and Malta. In addition, they discussed the positive outcomes and the challenges encountered during the implementation of pilot training in the three countries. Four main questions relating to the successful implementation of trainings were put under discussion: assuring continuous attendance, successful cooperation within training teams (trainers, interpreters and guest-speakers), conducting labor orientation of refugee women who are reluctant to work and transferability of training modules. A set of recommendations were formulated to aid the finalization of the national training modules in Bulgaria, Greece and Malta and the subsequent transfer of ownership to relevant national actors. 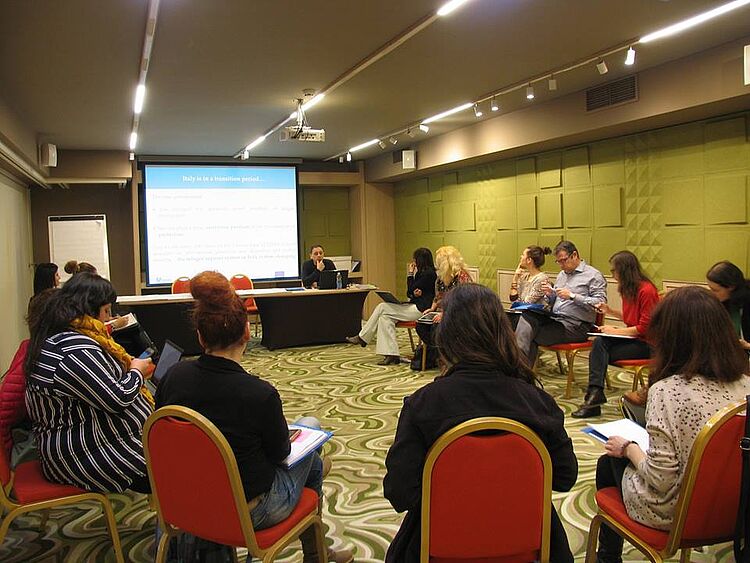