From 7 to 13 September 2009 a delegation from the Center for the Study of Democracy and the Applied Research and Communications Fund visited China to discuss common achievements and challenges between Bulgaria and China in the areas of good governance and technological development.

The delegation visited Beijing, Wuhan and Shanghai on invitation from the Chinese Association for International Understanding (CAFIU). The delegation was welcomed by Mr. Chengren Li, Executive Vice President of CAFIU and Mr. Kening Du, Deputy Secretary-General of CAFIU.

The CSD delegation headed by Dr. Maria Yordanova, Director, Law Program, met with representatives of the Chinese anti-corruption prevention and control system, which included the National Bureau of Corruption Prevention (NBCP), the Shanghai Municipal Commission for Discipline Inspection and the Shanghai Municipal Supervision Bureau. The NBCP was established in 2007 to underpin China’s government growing concern with corruption, in particular at municipal level, and to show a change in policy from focus on specific cases towards prevention measures. NBCP functions within the Ministry of Supervision and has policy, monitoring and international relations functions. CSD presented its state of the art Corruption Monitoring System and the anti-corruption policy process Coalition 2000, including and a comprehensive anti-corruption program, an annual corruption assessment report and policy forum. Notwithstanding the differences between the two countries, the meetings revealed certain common challenges they face in the area of good governance, such as the need for a comprehensive and reliable risk-assessment monitoring system, the perils of emergency state funding following natural disasters, etc.

The second thematic priority of the visit of the CSD/ARC Fund delegation to China included innovation, technology transfer and science. The delegates visited the biggest sci-tech park in China Zhongguancun, known also as the Chinese Silicon Valley. The park hosted nearly 20,000 high-tech enterprises and encompasses an area of 232 square kilometers. Dr. Yingqi Xia, Deputy Director of the Administrative Committee of the Zhongguancun Science Park outlined the vision of the park for becoming one of the world’s primary spots for innovation and talent. In Wuhan, the capital of Hubei province, the Municipal Bureau of Science and Technology hosted the delegation. The bureau is one of the two organizations representing Enterprise Europe Network in China. ARC Fund representatives had a brokerage meeting with local companies for exchange of technology offers. The visit also included a presentation of the East Lake Development Zone, Huagong Technological Park, the Hust Science Park and the Wuhan University. Wuhan is the third largest R&D center in China but with its fast growing potential it hopes to become central to Chinese R&D in some areas such as optoelectronics. The delegation’s last stop was in Shanghai, in which it visited the Zhangjiang High-Tech Park and the Urban Planning ExhibitionCenter, which provided a perspective for the future aspirations of Chinese development. 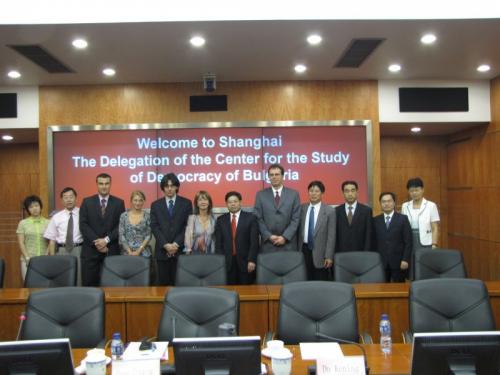 Round table: Environment and Energy Foresight: EU-China Cooperation
Meeting with representatives of the Chinese Association for International Understanding
Related