Cross-Border Organised Crime in the Context of the Migrant Crisis

Cross-Border Organised Crime in the Context of the Migrant Crisis

The recent migration and refuge crisis poses significant challenges to European governments. The unprecedented migration pressure provided many avenues for the generation of major profits by organised criminal networks. The large influx of irregular migrants looking for facilitation has led to the evolvement of human smuggling as a substantial criminal market in Europe. On the other hand some countries have experienced a concurrent rise in human trafficking cases.

How have cross-border organised crime networks and markets adapted to the migration crisis? How effective was the response of law enforcement bodies towards evolving threats such as human smuggling in both, transit and destination countries for irregular migrants? These are among the core issues examined in a study conducted by the Center for the Study of Democracy in cooperation with the Norwegian Police University College, and discussed during the conference “Cross-border Organised Crime in the Context of the Migrant Crisis”, held on 31 October 2017 in Sofia.

Rositsa Dzhekova, Coordinator of the Security Program at the CSD, introduced the main points for discussion during the event, noting that the way criminal markets and groups are impacted by and adapt to external developments of the magnitude of the recent migrant crisis has not been the focus of an in-depth discussion so far.

Tihomir Bezlov, Senior Fellow and Nadya Stoynova, Analyst at the Security Program presented the findings of the first in-depth study of human smuggling in Bulgaria. The authors discussed different aspects of the organisation of human smuggling operations, including their historical development and the effects of the migrant crisis, the networks involved, the financial aspects of the crime as well as the relation with other criminal activities. Human smuggling networks emerged already in the 1990s and readily adapted to changes in the migrants’ profiles and desired destinations. Since 2013, the migrant crisis significantly increased the demand for facilitation services leading to the expansion of existing networks, the emergence of new ones and the involvement of a significant portion of the criminal underground. Despite the magnitude of smuggling operations, the response of the Bulgarian institutions was delayed and insufficient, largely failing to bring about the dismantling of smuggling networks.

Prof. Paul Larsson, Associate Professor at the Norwegian Police University College, discussed practices and challenges to policing human trafficking and human smuggling in Norway, where the threat of organised crime has been traditionally associated with drug crime. Nevertheless, human trafficking for sexual and labor exploitation is another criminal activity that has become a priority for the police. Difficulties in countering trafficking in Norway include the international character of the crime, the reluctance of victims to cooperate, as well as the availability of resources to conduct complex investigations. Therefore, the dark number of unidentified cases is likely large. The response to human trafficking would benefit from the accumulation of more expertise, strengthened international cooperation and preventive initiatives. On the other hand, human smuggling so far has not been considered a major threat, although more police attention is being devoted to the issue recently. At the same time, countering human smuggling is plagued by similar challenges as those encountered with regard to human trafficking.

The approach of Bulgarian law enforcement bodies in countering illegal migration and smuggling was discussed by Inspector Mihail Dimitrov of the General Directorate Border Police (GDBP), Chief Inspector Dimitar Kangaldhziev of the General Directorate National Police (GDNP) and Inspector Petar Petrov of the General Directorate Combating Organised Crime (GDCOC). In response to the increased migration pressure at Bulgarian borders over the past few years, the GDCOC and GDNP have been increasingly involved in countering human smuggling, while the GDBP’s capacity has been strengthened by support from Frontex and advancements in border surveillance equipment. In addition, efforts have been made to establish effective channels of cooperation and information exchange between the different competent bodies. However, despite an accumulation of expertise, the police notes challenges with regard to the availability of resources (е.g. translators competent in the languages of the migrants and some perpetrators) and proving criminal activity due to specificities in the crime and its cross-border component.

Slavyanka Ivanova, Senior Analyst at the Sociological Program, explored the way new technologies have been utilized to aid human trafficking and human smuggling. The internet, social media and mobile apps are important tools with significant potential for the successful recruitment of victims for exploitation in labor and sexual services, while with regard to human smuggling, they facilitate the communication between the migrants and the smugglers. 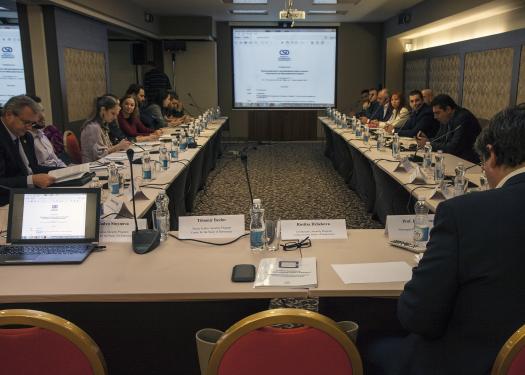 During the international conference “Cross-border Organised Crime in the Context of the Migrant Crisis”, Sofia, 31 October 2017

The Participants in the international conference “Cross-border Organised Crime in the Context of the Migrant Crisis”, Sofia, 31 October 2017

During the international conference “Cross-border Organised Crime in the Context of the Migrant Crisis”, Sofia, 31 October 201

The Participants in the international conference “Cross-border Organised Crime in the Context of the Migrant Crisis”, Sofia, 31 October 2017

Rositsa Dzhekova, Coordinator of the Security Program at the CSD, and Tihomir Bezlov, Senior Fello

During the international conference “Cross-border Organised Crime in the Context of the Migrant Crisis”, Sofia, 31 October 2017

Cross-border organised crime: Bulgaria and Norway in the Context of the Migrant Crisis
Related