On 29 and 30 of June 2015 the Center for the Study of Democracy hosted the first Workshop along the international initiative for development of a tool for monitoring of radicalisation trends in South East and Central Europe. The following partners took part in the meeting: Mila Mancheva, Senior Analyst at the Sociological Program, Rositsa Dzhekova, Coordinator of the Security Program, Emil Tsenkov, Senior Fellow at the Security Program, Miryana Ilcheva, Research Fellow at the Law program, Maria Doychinova, Analyst at the Law program, Lubomira Derelieva, Analyst at the Law program and Yavor Tomov, Analyst at the Security Program from the Center for the Study of Democracy, Bulgaria; Dia Anagnostou and Dimitris Scleparis from ELIAMEP, Greece; Ludek Moravec and Oldrich Krulik from Charles University, Prague. The workshop involved the presentation of progress results from national background studies on right and left wing radicalisation, Islamist radicalisation and football hooliganism. In addition a discussion was held regarding the most relevant types of monitoring tools to be adapted to the national contexts of Bulgaria, the Czech Republic and Greece.

In the first two sessions of the workshop the Bulgarian and the Czech research teams presented their findings with regarding to radicalisation trends in respectively Bulgaria and the Czech Republic. Lubomira Derelieva, Maria Doychinova, Mila Mancheva and Yavor Tomov (CSD, Bulgaria) discussed trends in left wing, right wing, Islamist radicalisation and football hooliganism in Bulgaria. Ludek Moravec and Oldrich Krulik (CUNI, Czech Republic) presented findings regarding radicalisation trends in the same spheres in the Czech Republic. Researchers from both teams discussed the ideas, the actors, the organisational structures, the repertoire of actions and the groups at risk of radicalisation in each of the two Member States. Both teams reported stronger manifestations and structures of the far right as opposed to weaker presence of radical left groups in the two countries. Researchers from CSD stressed that the study in Bulgaria is a pioneer attempt to address the topic of radicalisation in Bulgaria with very little research being conducted to this moment. The researchers from both teams closed the sessions by discussing gaps and achievements in the institutional response to violent and non-violent actions related to processes of radicalisation.

The 30th June session was opened by Dia Anagnostou and Dimitris Scleparis (ELIAMEP, Greece) who discussed radicalisation trends in Greece. They argued that opposite to Bulgaria and the Czech Republic, the Greek case presents a historically stronger presence of far left and anarchist groups, involving political violence. Far right groups on the other hand become more prominent in the last years in the context of the economic crisis. Dimitris Scleparis reported that when discussing football hooliganism Greek scholars tend to focus on the media`s representation of hooliganism and on the various political and police counter-hooliganism responses.

The last Workshop session was headed by Rositsa Dzhekova, who presented an overview of counter-radicalisation approaches and monitoring tools developed in EU Member States and mainly designed to address issues related of Islamist radicalisation. Ms. Dzhekova discussed four main approaches to countering radicalisation in the EU: general crime prevention and social policy approach, securitized approach, social integration-linked approach and multi-agent and multi-level approach. Following short presentations of the gaps in monitoring radicalisation in Bulgaria, the Czech Republic and Greece, the session was concluded by a discussion about the most relevant monitoring approaches to be adopted in the three countries. 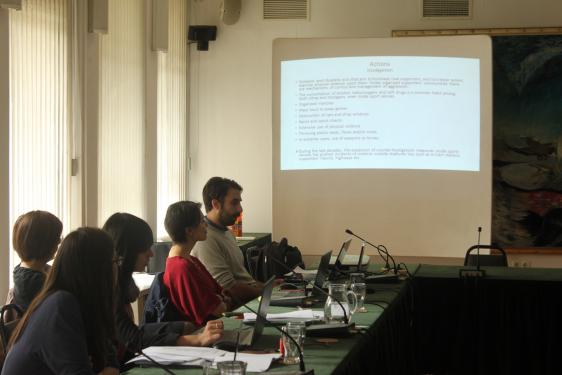 Participants in the MONITOR Workshop

Rositca Dzhekova, Coordinator of the Security Program at CSD
Related