Classic extortion racketeering was widespread in Bulgaria in the 90s of last century, but in the last fifteen years gradually declined and is not the big organized crime threat that it used to be. However, new forms of extortion emerged and gained momentum - different from those of the recent past, but in no case less dangerous or harmful. These new forms include systematic practices of organized extortion by public officials and persons holding managerial positions in the private businesses. A round table dedicated to the issue of extortion racketeering and the ways of tackling this criminal phenomenon was organized by the Center for Study of Democracy and took place on May 19, 2016. The roundtable was attended by representatives of the following institutions: the research centre Transcrime of the Università Cattolica del Sacro Cuore of Milan, the Italian police, the Prosecutor's office of the Italian Republic, the Appellate Specialized Prosecution Office of Bulgaria, Directorate General for Combating Organized Crime, the National Police and the AFCOS Directorate of the Interior Ministry, the Inspectorate of the Ministry of Agriculture and Food and the Inspectorate of the Ministry of Tourism.

In his opening speech, Dr. Ognian Shentov, Chairman of the Center for the Study of Democracy, emphasized the importance of the topic in discussion. New forms of racketeering, including the extortion by public officials, which experts of the Center defined as different from traditional sporadic forms of corruption, are extremely dangerous and require both a timely diagnosis and systematic countermeasures.

Dr. Atanas Rusev, Senior Аnalyst, and Tihomir Bezlov, Senior Fellow of the Security Program at the Center for the Study of Democracy, presented the results of a study on the practices of extortion racketeering in the agricultural and the hospitality sector in Bulgaria, which focused on the risk and vulnerability factors in both sectors. Mr. Tihomir Bezlov made a historical overview of organized crime in Bulgaria and substantiated the alleged decline of classical forms of extortion racketeering. Dr. Atanas Rusev analyzed the new forms of extortion in agriculture. The main enabling factors for these practices, which were outlined, were the considerable imbalance in land use and ownership, the regulatory framework for granting farm subsidies, the lack of viable associations of the small farmers, local corruption and others. Mr. Tihomir Bezlov presented the main forms of extortion in the hospitality sector. The main vulnerabilities related to extortion in this sector are also rooted in the existence of a large grey sector, the traditional presence of criminal structures, and the low capacity and high levels of corruption in the administration.

Prof. Stefano Becucci from the Department of Political and Social Sciences of the Catholic University of Milan, and Lorella Garofalo, research fellow in Transcrime, spoke about the Italian experience on the issues of extortion and organized crime. Prof. Becucci made a historical overview of the main criminal activities of the main mafia organisations in Italy and the mechanisms of their formation and activity. Ms. Garofalo presented a current picture of organized crime in Italy - national mafia-type organisations that use extortion racketeering to control territory and foreign organized crime groups from Eastern Europe and the Far East (China) that practice extortion against civilians and businesses within their ethnic communities. Data on the rates of extortions against citizens and business was presented, as well as how usually victims react to extortion demands. The Mafia’s activities in different regions of Italy varies, maintaining traditionally high presence in regions of South Italy.

Dr. Giovanni Giudicce, Police Director, Agrigento, Sicily, spoke about the role of the Italian police in investigations carried out to counter extortion racketeering. Particularly important is the thorough knowledge by the police of all the details of the structure, local characteristics and methods of mafia organizations. Attitudes and behaviour of victims were identified as one of the most important factors for a successful fight against the Mafia. In this regard, the measures, which the Italian state and criminal justice institutions implement to encourage victims to testify were outlined. He particularly outlined the role of measures such as the program for witness protection and the financial compensation for damages incurred by the victims. The attitude of the society is also important and in this regard Dr. Giudicce pointed out the experience of anti-racket civil society organisations and business associations who effectively oppose the actions of mafia structures.

Dr. Giovanbattista Tona, a magistrate at the Court of Appeal in Caltanissetta, Sicily, and advisor to the parliamentary “Antimafia” committee, introduced participants to the provisions of Italian law regarding extortion racketeering. Italian laws provide for extremely harsh criminal sanctions, in particular in relation to extortion racketeering. The activity of the Italian judicial system is based on the understanding that the mafia groups are dynamically developing organisations that continuously adapt to the changes in society and the evolution of internal relations between members. In this way the forms of “participation” can vary and even coincide with the usual explanations for people's daily lives, which requires flexibility in the definition and implementation of the law.

Edi Oprea, Prosecutor of the Directorate for Investigating Organised Crime and Terrorism (DIICOT), Romania, presented some aspects of the work of the directorate. Mr. Oprea presented to the participants a practical case in which a local criminal group has created a system for extortion of foreign businessmen.

Nikolay Naydenov, Deputy Chair at the Appellate Specialized Prosecution Office, Bulgaria, praised the content and conclusions and proposals of the report of the Center for the Study of Democracy. His speech highlighted the role of citizens and the public to effectively counter the acts of extortion by officials in both the state and the municipal administration. 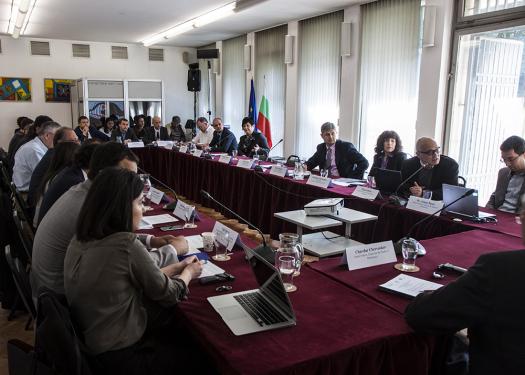 Participants at the round table 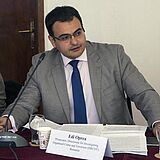 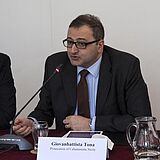 Dr. Giovanbattista Tona, a magistrate at the Court of Appeal in Caltanissetta, Sicily, and advisor to the parliamentary “Antimafia” committee 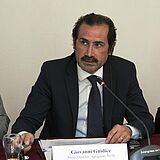 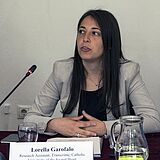 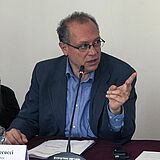 Prof. Stefano Becucci, the Department of Political and Social Sciences of the Catholic University of Milan 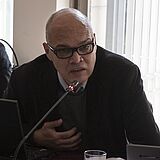 Tihomir Bezlov, Senior Fellow of the Security Program at the Center for the Study of Democracy 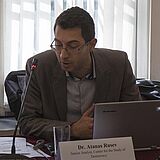 Dr. Atanas Rusev, Senior Аnalyst of the Security Program at the Center for the Study of Democracy 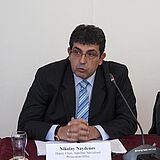