During the 1990s, Bulgaria experienced a significant upsurge in extortion racketeering, a crime which came to define the decade. Even though rates have decreased in recent years, the problem appears to persist.On 27 October 2016, the Center for the Study of Democracy organized a round table discussion on Countering Extortion Racketeering: Problem areas and Possible Measures. The meeting was attended by representatives of the Ministry of Interior, General Directorate National Police, General Directorate Combatting Organised Crime and the Sofia Appellate Court.

Let. Chavdar Chervenkov, Senior Fellow at the Center for the Study of Democracy, opened the meeting by introducing briefly the initiative behind the event, which examines forms and practices of extortion racketeering in six European countries. In Bulgaria, the main economic sectors which were inspected for the presence of extortion were agriculture and hospitality.

Tihomir Bezlov, Senior Fellow at the Center for the Study of Democracy presented in detail the results of the study. He noted that there is a significant drop in the cases of extortion (especially compared to the boom experienced in the nineties), which was observed not only in police statistics but also in victimisation surveys. Nevertheless, he stressed that these findings might be misleading, as a significant number of firms report an experience with corruption of administrative organs, which on closer inspection can instead be classified as cases of administrative extortion. The victims of these crimes often do not recognize the act as racketeering as violence is rare and the perpetrators are administrative officials. Mr. Bezlov addressed extortion in the agricultural and hospitality sectors, which are often perceived as bribery, but in reality are perpetrated by politically protected networks and this explains the stability in criminal practices during changes of governing coalitions.

Dr. Atanas Rusev, Senior Analyst at the Center for the Study of Democracy presented the methodology for assessing vulnerability towards extortion racketeering developed as a result of the analysis. The aim of the assessment tool is to measure the opportunities in front of OCGs, which make the perpetration of the crime possible. The purpose of the tool is to enable early identification which can supplement traditional law enforcement approach of investigating extortion and inform preventive an pro-active measures against this crime.

Dr. Maria Yordanova, Director of the Law Program at the Center of the Study of Democracy introduced the general legislative framework for fighting organized crime with a particular focus on the institute of the protected witness. She noted that in Bulgaria this method is very often employed in criminal proceedings against organised criminal groups, yet its effectiveness appears to be low. She stressed the importance of utilizing this method only when strictly necessary as it infringes upon equality and adversarial conditions for the parties in a judicial procedure and essential rights of defendants enshrined in Bulgarian, European and international law. She further outlined a number of recommendations for improving the effectiveness of the institution of the protected witness, as well as for implementation of best practices from abroad such as the possible introduction of the figure of collaborator of justice often employed in Italy.

Plamen Datsov, judge at the Sofia Appellate Court, outlined the long standing practical problems that are often experienced and lead to a diminishing of the effectiveness of special investigative tools in the fight against organized crime. He noted that Bulgaria’s poor record at the European Court of Human Rights can largely be attributed to infringements of the right of defendants of fair trial due to unlawful means and problematic use of special investigative means and protected witnesses to prove a crime in court.

During the discussion panel, Svetoslav Pashov, inspector at the General Directorate National Police, stressed that the shortages in material and human resources are one of the factors hindering the effectiveness of police investigations in cases of complex crimes. He further indicated that there are significant differences in the court practices with regards to criminal proceedings, which further complicates and impedes the work of police in pre-trial investigations. 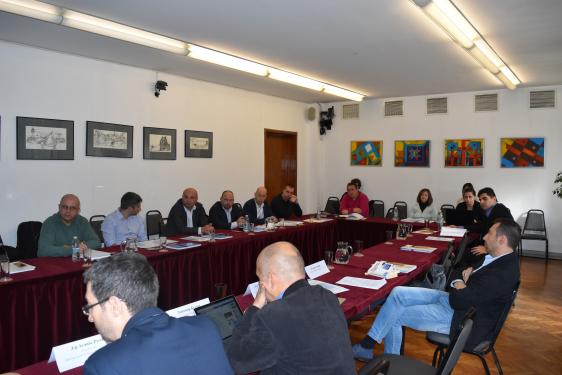 Participants in the "Countering Extortion Racketeering in Bulgaria: Examining the Evidence and Devising Appropriate Measures" round table discussion, 27 October 2016