The problem of private corruption is relatively new to corruption research, since traditionally corruption is seen as a public sector phenomenon associated with the use and abuse of public power, rather than with the operations of the private sector. The results from the first systematic study and report on private corruption in Bulgaria, implemented by the Center for the Study of Democracy, show that there are phenomena and practices in the private sector, which are to a large extent similar to the ones taking place in the overall corruption environment in the country. This was stated by Ruslan Stefanov, Director of CSD Economic Program at the opening of the round table on Countering Corruption in the Private Sector in Bulgaria on March 30, 2018.

Dr. Alexander Stoyanov, Research Director at CSD and author of the report, highlighted the fact that one in five companies in Bulgaria has experienced corruption pressure. The prevalence of corruption in the private and public sector seems to be approximately equal and no major differences between the two forms of corruption can be found. Around 20 % of the interviewed company executives report to having experienced corruption pressure, while in the public sector (in regards to the relations between the state and private business) this figure is 16 %.

The participants in the round table pointed out that the existence of private corruption in such dimensions considerably distorts the market environment, leads to implementation of practices, which destroy the normal market competition and eventually decreases the overall effectiveness and competitiveness of the private sector.

An example of countering corruption in the private sector was provided by Delyan Dobrev, Chairman of the Energy Committee at the National Assembly, who referred to the electrical energy market, where in order to avoid purchase and resale of electrical energy at higher prices on behalf of private companies, as of 1 January, 2018, a formal requirement was introduced that all electrical energy transactions should be performed only through the energy stock exchange.

Nicola Yankov, Managing Partner and Chairman of the Board of Directors at Expat Capital, called attention to the fact that corruption in the banking and non-banking financial sector does in no way concern just the private interest, as when it comes to allocation of cash flows by corrupt persons, resources are usually dissipated at the expense of society. This kind of behaviour is detrimental to the economic growth and curbs economic and social development. Even though there are strict legal frameworks in place, given the lack of effective regulatory supervision, the results are still far from satisfactory. A viable resolution would be Bulgaria’s joining the EU system of financial supervision.

In conclusion, the round table participants united around the view that the existence of corruption means lack of effectiveness and loss of prosperity for society as a whole. It was emphasized that even if Bulgaria takes one of the first places in Europe in terms of corruption awareness and counteracting, the efforts in this respect should continue. 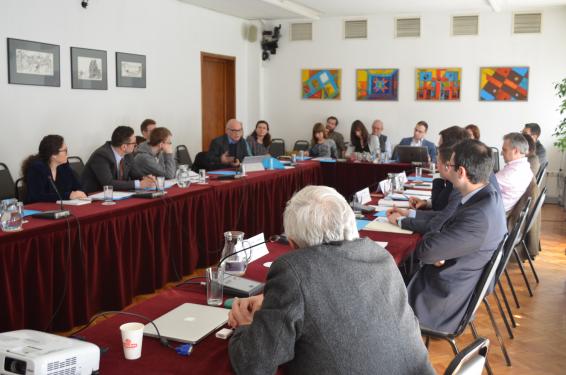