In the past ten years, both the nature of corruption and the anti-corruption agenda in Southeast Europe have changed. Political corruption has replaced petty bribery both as the dominant concern of national and international reformists and as one of the leading causes for most social and economic damage. The earlier emphasis on harmonising national legislation with international standards has now been substituted by a focus on its enforcement. In 2012 the European Commission adopted a new enlargement approach, which placed rule of law, anti-corruption, and judicial reform at the heart of the process. To respond to the new EU policy priorities, the Southeast European Leadership for Development and Integrity (SELDI) coalition and the Macedonian Anti-Corruption Platform have developed and implemented a civil society-led approach to monitoring and tackling corruption, which provides policy makers with important insights.

The Second Regional Anti-Corruption Policy Forum, supported by the DG NEAR at the European Commission, USAID and the Central European Initiative (CEI), drew an accurate picture of the corruption environment in the region, presented the latest data on corruption pressure and introduced new ways for improving anti-corruption efforts. The forum underlined that critical sectors with high corruption and state-capture risks should be addressed with priority. Special focus was placed on the state capture, the judiciary and the role of the civil society. The event gathered more than 100 representatives of the EU and civil society organizations from the region to brainstorm ideas for countering these risks.

The forum, held in Skopje on 29-30 September 2016, presented the main findings and policy recommendations from the SELDI 2016 Corruption Monitoring System in SEE to national and regional stakeholders. The event also set a platform for engagement of the state and civil society, taking stock of the analysis performed by coalition partners in the last four years, and seeking higher recognition of the value of CSOs participation in the reform process by the governmental institutions.

The representatives of the public institutions talked about the practical challenges of initiating a large-scale anti-corruption campaign in spite of the outside political pressure to prevent it from bearing fruit. Mr. Nicola Bertolini, Head of Cooperation at the Delegation of the European Union in Skopje underlined that corruption should be countered by prevention, control and enforcement methods. To achieve this common goal, the Civil Society Facility supports the CSOs efforts to provide advocacy and keeping the governments accountable. The statement that “the price of liberty is eternal vigilance” was further reinforced by Mr. Alexander A. Arvizu, Deputy Assistant Secretary, Bureau of International Narcotics and Law Enforcement Affairs (INL). He further noted that we cannot let the concept of corruption operate with impunity and we cannot let corruption become substitute of the rule of law, as it will eventually destroy the foundation on which democracy rests. In that respect he congratulated Macedonia for recognizing the importance of anti-corruption and the establishment of the Special Prosecutor’s institution. Mr. Ivo Vajgl, MEP, Raporteur for Macedonia, European Parliament expressed his hope that the Macedonian parliamentary elections on 11 December 2016 will be democratic and transparent, and will be the start of an efficient cooperation between all parties working towards the common European goals. He also commented on the mood in the European Commission where according to various opinions the enlargement process should be slowed down. Mr. Vajgl however insisted on its acceleration, since only enlargement and unification can prevent the hate between countries and nations, leading to conflicts and war. Ms. Katica Janeva, Special Public Prosecutor of the Republic of Macedonia noted that the price of corruption is paid by the citizens, however all efforts are in place to provide the needed institutional response. The recognition by the people is giving them courage and commitment to achieve their mission. She stressed on the importance of civil society inclusion in the anti-corruption efforts, especially in tackling the challenge of ensuring accountability of political parties, their individual members, as well as limiting their potential to influence the courts.

Specific focus was placed on the collaboration between the policy-makers and the civil society in developing monitoring instruments for countering this structural problem, with concrete examples presented by SELDI and the Macedonian Center for International Cooperation. Ms. Sabine Zwaenepoel, Chapter Coordinator, Accession negotiations to the EU, Directorate-General for Neighbourhood and Enlargement Negotiations, European Commission underlined that since 2011 there is a new approach in accession negotiations, focusing on results, not only on legislative harmonization. Thus chapters 23 and 24 are opened at the beginning and closed at the end of the accession negotiations, in order to provide sufficient time for the reforms to take place. As safeguard measure negotiations on all other chapters could stop till a progress in these two chapters is achieved. Ms. Zwaenepoel highlighted as key issue of concern the lack of pro-activeness by the law enforcement and justice bodies in the region. She noted that if an institution is not pro-active, it is also not independent. Thus, sensitive areas such as the political party financing and financing of electoral campaigns remain untouched, while legislation and interpretation of laws remains formalistic. Ms. Zwaenepoel concluded with the need for mentality change and stated that DG NEAR will continue to work with SELDI on forming a more comprehensive monitoring mechanisms.

The participants agreed that in order to enhance whistleblowers’ protection, EC and the national governments should undertake internal mapping and ensure the opening of public and corporate data for scrutiny by the public and CSOs. In addition, the freedom of press and investigative journalism should in no way be obstructed, as noted by Dr. Janina Berg, Good Governance, Anti-Corruption & Human Rights Consultant, Ascent-EU. They key challenge is setting in place reliable, responsive protection mechanisms for whistleblower.

During the second day of the Policy Forum, the discussion focused on the processes of building institutional competencies and enhancing the efficiency of the administration. Mr. Vladica Babić, Assistant Director, Sector for the Prevention of Corruption at the Agency for the Prevention of Corruption and Coordination of the Fight against Corruption, Sarajevo described their role in providing guidelines to institutions which are currently preparing Integrity Plans. He also noted the challenges that the complex administrative setup in Bosnia and Herzegovina poses to the effective coordination when improving the legal framework, the operations of judicial bodies, raising public awareness and participation, monitoring and evaluation of the implementation of the Anti-corruption Strategy. Mr. Milos Mojsilovic, Senior Adviser, Corruption Prevention Department, Anti-Corruption Agency of Serbia further underlined that when maturity of the political system is missing, stronger mechanisms are needed. In that respect the Anti-Corruption Agency of Serbia has proposed legislative changes related to the rules for conflict of interest disclosure, provision of asset declarations to the Agency by all institutions, access to all relevant databases, and direct system of punishment.

The representatives of the civil society agreed that politization is the main tool of state capture and the key problem is not always lack of capacities, but the manner in which they are used. The participants also noted that judiciary can be improved only with good management, leadership and functioning internal integrity system. 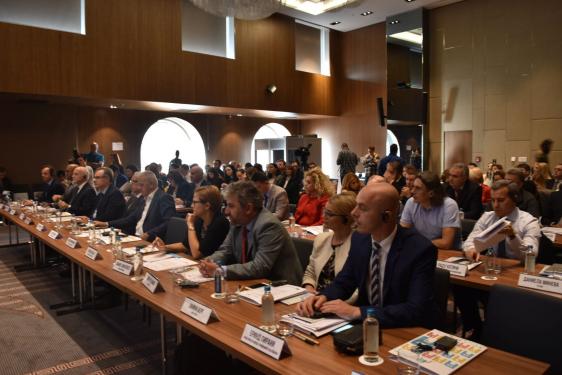