The 3-day training, organised by the SELDI anti-corruption initiative on 12-14 June 2019 in Sarajevo, had as key objectives to inspire CSOs and grassroot organisations to engage in anti-corruption initiatives, instruct them how to apply corruption and state capture monitoring methodologies, and encourage them to collaborate among themselves and with the public institutions in order to achieve positive impact over the national and regional policies.

During the opening, Dr. Janina Berg, Policy Officer at the Center for Thematic Expertise – Rule of Law (Anti-Corruption desk) of DG NEAR, European Commission underlined the importance of CSOs bringing out the voices of the public and holding the institutions accountable. She noted the challenges that countries from the Western Balkans face in the area of the rule of law, and the observed links between organised crime and corruption. In that regard she recommended that countries utilise the  principle "fundamentals first" and tackle the issues with greatest negative impact through systematic investigations. Vladimir Pandurevic, Programme Manager for Civil Society/EIDHR/Culture/Youth at the  Delegation of the European Union to BiH recommended a stronger cooperation between the public institutions in Bosnia and Herzegovina, necessary in order to tackle state capture.

Day 1 of the training was dedicated to sharing SELDI’s experience and research methods in delivering anti-corruption solutions, advocacy and policy enhancement. SELDI’s experts demonstrated to the CSOs and the grassroots the main SELDI corruption monitoring and anti-corruption assessment instruments, with a specific focus on state capture and corruption risk assessment at institutional level (Monitoring Anticorruption Policy Implementation (MACPI) State Capture, MACPI Micro, Corruption Monitoring System, Hidden Economy Index). The afternoon session was reserved for training the grantees on the specifics of project implementation and reporting based on the EU Rules and Standards. The grantees shared their project ideas, thus finding supporters and collaborators among the audience. The future projects of the grantees will focus on the following topics:

Day 2 of the training focused on two key topics. The first one was the establishment of civil society-media relations and the benefits to CSOs of working with investigative journalists. Day 2 was also dedicated to the final objective of any anti-corruption effort: improving the current policies, strategies and laws through efficient public-private partnerships. All participating anti-corruption agencies from the SEE region and other public organisations tasked with countering corruption confirmed their willingness to work with the civil society. They noted the benefits presented by the human potential of CSOs and grassroots in terms of receiving advice or technical support regarding legislative changes, evaluation of the efficiency of the current policies and strategies and the formulation of new ones. The CSOs and grassroots also gained better understanding on their potential role as partners to the public institutions, and the existing opportunities for policy participation. In addition, all countries highlighted the unsatisfactory rate of reached convictions, despite the numerous instances of corruption uncovered. The anti-corruption agencies explained that their authorities constitute mainly preliminary investigations of corruption cases, education and prevention. Thus, they advocated for stronger commitment by the prosecutors' offices and courts in the region, which are in charge of the effective processing of the corruption signals. During the discussion, representatives of the private sector and the civil society suggested that the countries from the region explore the possibility for increased use of disciplinary actions, such as fines and dismissals of public servants. On the one hand, these can prevent a corruption action before it happens, and on the other hand, the procedures are faster than in criminal prosecution.

Day 3 of the training was be dedicated to the role of the civil society as drivers of the EU transformation processes, and the importance of CSO networking. The CSOs and grassroots were able to hear best practices from practitioners, experienced in building CSO anticorruption coalitions and achieving policy impact. SELDI members and other partner CSO organisations also shared their methodologies and good practices, with a focus on the monitoring of public spending and public administration reforms, further inspiring CSOs and grassroots to engage in these areas. A specific focus was placed on the process of CSOs developing analytical content. The participants agreed that CSOs need to always be innovative and improve their methods of effectively communicating advocacy messages, including through infographics and videos, published on YouTube, Instagram, Facebook and other social media.

* This designation is without prejudice to positions on status, and is in line with UNSCR 1244/1999 and the ICJ Opinion on the Kosovo declaration of independence 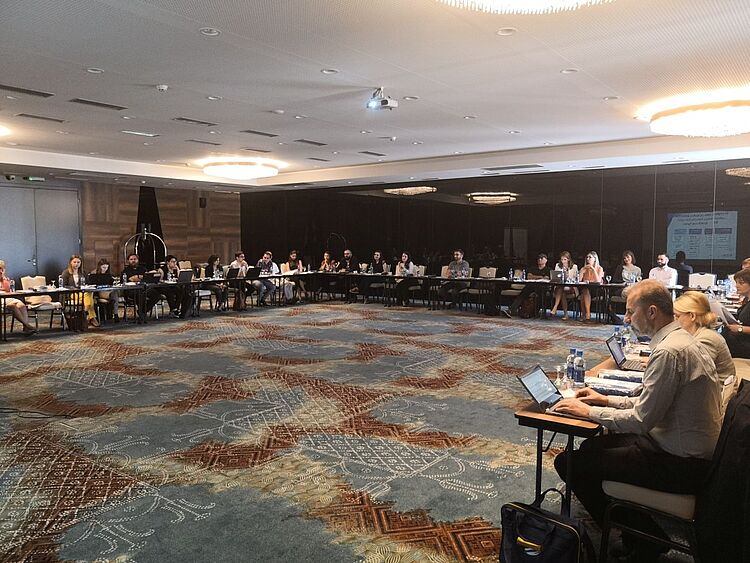 The participants in the SELDI CSO Training: Corruption and State Capture Monitoring, Advocacy and Impact in a World of Hybrid Threats, 12-14 June 2019, Sarajevo

The participants in the SELDI CSO Training: Corruption and State Capture Monitoring, Advocacy and Impact in a World of Hybrid Threats, 12-14 June 2019, Sarajevo
Related