Victims of domestic violence and human trafficking, persons in need of international protection and those deprived of liberty are among the vulnerable groups in need of the support of the civic sector in their relationships with institutions. Their problems were at the forefront of the discussion at the working meeting ‘Civil Society in Support of Vulnerable Groups’, organized on 25 February 2016 by the Center for the Study of Democracy. The main aim of the meeting was finalizing the concept on more effective participation of NGOs in the system of support of vulnerable groups, developed by CSD experts. Representatives of NGOs, involved in supporting the four vulnerable groups, took part in the event.

In her opening remarks, Dr Maria Yordanova, Director of the Law Program of the Center, marked the highlights of the Center’s long years of work on the situation of all four vulnerable groups and the importance of the co-operation between institutions and NGOs in the improvement of their position.

Ms Miriana Ilcheva, Research Fellow with the Law Program of the Center, pointed to the problematic areas in the communication between vulnerable communities and institutions, on which the research deliberates, and outlined the activities of the initiative already completed.
Ms Miriana Ilcheva further presented an extended draft concept on more effective participation of NGOs in the system of support of vulnerable groups. Co-ordination of efforts between institutions and NGOs on all levels, including project financing of organisations from the state budget, as well as better presence of civic structures in the process of preparing legislation and policy making, are suggested as general avenues for such participation. The concept also offers concrete sector reforms, among which an established mechanism for access of NGOs to prisons, participation of civil society in trainings of institutions on all levels, enhanced presence of the non-governmental sector in the reintegration of victims of trafficking. Among the new developments Ms Ilcheva deliberated upon were the efforts to update the National Referral Mechanism for victims of trafficking, as well as legislative changes and drafts, concerning public consultations, impact assessment of legislation and new hypotheses of access of NGOs to persons deprived of liberty and foreigners in need of international protection.

In the ensuing discussion Ms Slavyanka Ivanova, Senior Analyst with the Sociological Program of the Center, pointed to the weaknesses of project financing and the need for the state to support vulnerable groups via sustainable mechanisms. Ms Anna Bazelkova from the Center for Legal Aid Voice in Bulgaria also emphasized the necessity for state authorities to take responsibility in the area of integration and education of foreigners in need of international protection. Dr Maria Yordanova deliberated on the importance of international co-operation among institutions and NGOs.
Ms Aneta Moyanova from the Integra Association outlined the role of NGOs as mediators, especially in the education, social work with and reintegration of persons deprived of their liberty. Ms Vera Nikolova from CVS Bulgaria described the support which the draft law on volunteers gathers among the NGO sector and the slow progress of the draft.
Mr Dimitar Markov, Senior Analyst with the Law Program of the Center for the Study of Democracy, appealed for sustainability of the co-operation between institutions and NGOs and gave an example from Spain, where much of the probation activities are outsourced to NGOs. Mr Markov stated the authorities need to quantify the resource needed for care to vulnerable groups and to identify the cases where this may be done by NGOs. Ms Slavyanka Ivanova also emphasized the need for financial assessments in the area of supporting vulnerable groups. 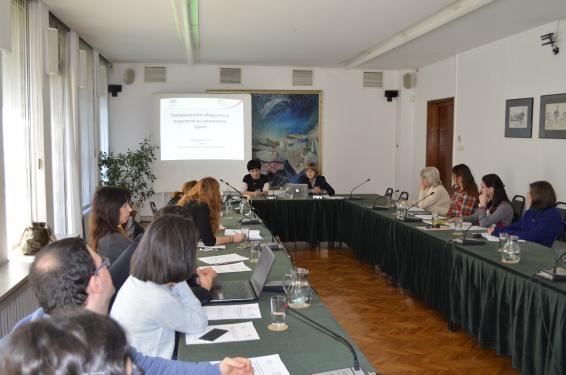