On 27 May 2015 the Center for the Study of Democracy in partnership with Enterprise Europe Network at ARC Consulting presented the results of the IMD World Competitiveness Yearbook 2015. The Center for the Study of Democracy is official partner for Bulgaria of the World Competitiveness Center at IMD (International Institute for Management Development). The previous issues of the Yearbook had a direct impact on the Bulgarian competitiveness policy-making, and were quoted in strategic policy documents of the Bulgarian government. International investors monitor very closely the IMD competitiveness ranking, which makes its 2015 results even more relevant.

In 2015, Bulgaria ranks 55th out of 61 economies, while in 2014 it ranked 56th. Bulgaria remains among the most uncompetitive countries, with only Croatia and Ukraine having lower scores in Europe. The country remains far from his best achievement - 38th place in 2009 - a sign that the Bulgarian government and business leaders still fail to define and implement coherent policies tailored to the national interests, needs and competitive factors. The main advantages of the Bulgarian economy remain associated with the low prices, which makes the country vulnerable to changes in the international environment.

As expected, the bank crisis of 2014 and high government expenditures had a negative impact and weakened the competitive position of the country. At the same time, the unemployment rate remains high, despite a slight decrease. Long-term competitiveness factors - environmental protection, education, infrastructure and overall healthcare, as well as the business efficiency indicators, such as level of performance and quality management practices, are among the ones evaluated as lowest by the IMD Yearbook, and continue to stand as a challenge.

The Bulgarian competitiveness is in decline. In practice, during the first eight years of its EU membership, the country has failed to close the gap with the other Eastern European countries. The major challenges facing the country in 2015 are: optimizing the performance of the public administration, tackling energy poverty, and enhancing the fight against corruption. Among the factors that improve the overall competitiveness of Bulgaria, it is worth noting the growth of business spending on science and innovation. 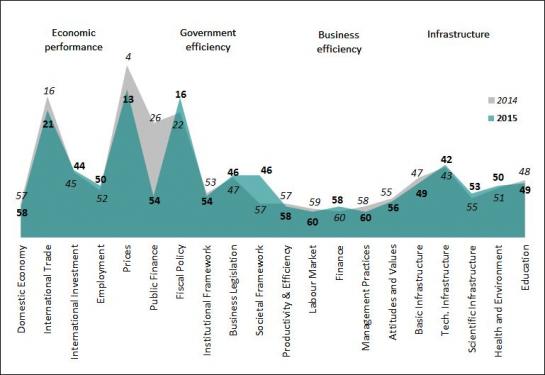 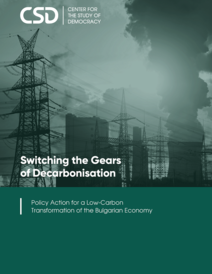