On 22 May 2014 the Center for the Study of Democracy presented the results of the IMD World Competitiveness Yearbook 2014. The Center for the Study of Democracy is the official partner of the World Competitiveness Center at IMD (International Institute for Management Development) for Bulgaria. The previous eight issues of the Yearbook had a direct impact on the policy-making and were quoted in strategic policy documents of the Bulgarian government. International investors monitor very closely the IMD competitiveness ranking, which makes its 2014 results even more relevant. In 2014 Bulgaria is ranked in 56th position – one place above its 2013 rank.

Mr. Ruslan Stefanov, Director of the Economic Program at the Center for the Study of Democracy, presented a general overview of the report’s results. He pointed out that after seven years of EU membership, Bulgaria does not have much to report with respect to its macroeconomic progress. According to Mr. Stefanov, Bulgaria’s low ranking is mainly the result of the continuing deflation, deficiencies in the energy policy and the lack of transparency and impartiality of the judiciary sector in Bulgaria. Although in general deflation could be a positive factor for a country’s competitiveness, for Bulgaria it poses a threat to the business environment and recovery of the economy. The insufficient efforts of the past governments and the current one to regulate the formation of the electricity prices for businesses and households also have a negative effect on the economy. Mr. Stefanov added that for the improvement of the Bulgarian competitiveness, there must be efficient rule of law, complemented with efficient functioning of the judiciary sector. Croatia, for instance, accessed the EU without being subjected to a Cooperation and Verification Mechanism like Bulgaria and Romania. In that regard Bulgaria is treated as a candidate for membership in the EU and not as a member. The shortcomings in the judiciary sector harm the domestic business environment, foreign investments, the country’s progress towards membership in the Schengen area and Bulgaria’s long-term competitiveness as a whole.

Mr. Martin Tsanov, Analyst at the Economic Program of the Center for the Study of Democracy, discussed the IMD results in detail. Bulgaria’s ranking in 2014 (56th out of 60), similar to the last two years, shows a tendency towards economic stagnation. The biggest improvement is observed in the export sector, but with a decrease in domestic demand. There are also positive developments with respect to the transport infrastructure, which can be attributed mainly to the assistance from EU funds. Bulgaria has also maintained a good ranking in the area of fiscal policy, due to its flat tax rate. The procedures for starting a new business are also positively assessed. Mr. Tsanov pointed out the lack of transparency of government decisions, underfunding of the education and healthcare sectors, low GDP per capita and high youth and long-term unemployment as particularly alarming indicators. Mr. Stefanov added that one of the reasons for the observed low GDP per capita in Bulgaria is the regressive nature of the tax system, which appears to burden a large part of the Bulgarian population.

Mr. Plamen Shalafov, Analyst at the Economic Program of the Center for the Study of Democracy, commented on the state of innovations in Bulgaria and the lack of incentives for conducting research. In the current context of EU elections, ‘innovation’ is not a topic on the agenda of any of the political parties. Mr. Shalafov outlined the lack of a clear innovations strategy in Bulgaria, the need to update the existing one, the fragmentation and lack of cooperation among different agencies and ministries in charge of the innovation policy as main drawbacks for the progress in the field of innovation. In addition, centralized decision-making does not allow the government to implement targeted innovation and research measures at the local level. Mr. Shalafov also highlighted the halt of research funding in the last two years and the relative underpayment of Bulgarian researchers compared to their EU colleagues.

Mr. Martin Vladimirov, Analyst at the Economic Program of the Center for the Study of Democracy, gave an overview of the current negative developments in the energy sector. He focused on three issues - regulatory unpredictability , lack of transparency in government decisions with respect to investment in big projects (e.g. South Stream), without initiation of a public debate and cost-benefit analysis, and the low level of energy diversification in Bulgaria. One of the key factors determining the investment decisions of companies willing to relocate to another country is the price of base goods such as utilities, including electricity, and the stability of those markets. 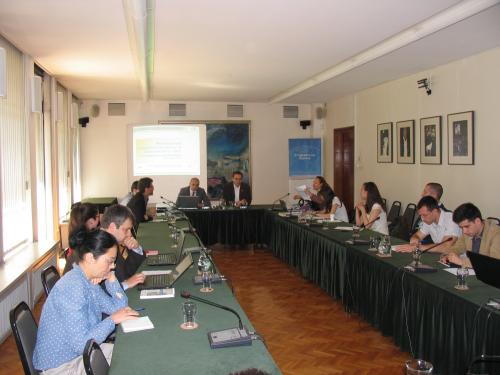