On 9 October 2018 the Center for the Study of Democracy organised a round table to discuss the findings of the Bulgarian Organized Crime Threat Assessment (BOCTA) reportprepared with the financial support of the European Union Internal Security Fund. The event brought together representatives of the Ministry of Interior, the Customs Agency, the National Revenue Agency, the National Commission for Combating Trafficking in Human Beings, the Supreme Court of Cassation, and the State e-Government Agency.

In his opening remarks, Lt. Gen. Chavdar Chervenkov, Senior Fellow at the Security Program of the Center for the Study of Democracy, reviewed the analysis’ highlights, pointing out that the assessment is based on a Europol-developed methodology and the ordering of illegal markets in the report corresponds to the amount of financial losses for the treasury.

Dr. Mois Faion, Senior Fellow at the CSD Security Program, presented the methodology and the scope of the Bulgarian organised crime threat assessment. He outlined the major trends, structure and size of the country’s main criminal markets and the damages they cause, and offered some recommendations on how to minimize the impact of organised crime. Dr. Faion also stressed that the analysis assesses the threats, rather than the efforts to counter organised crime.

Tihomir Bezlov, Senior Fellow at the Security Program, explored the dynamics in the main criminal markets in Bulgaria in the past year. The assessment data indicates that the percentage of companies subjected to extortion racketeering and usury over the year is on the decrease. At the same time, there is growth in the domestic sex market, with the percentage of men over 15 years of age who paid at least once for a sex service during the last year having risen to 5.9 % compared to 1.6 % in 2010. Another criminal market displaying a significant surge since the last organised crime assessment is the illegal trade in fuels where estimates of damages for the state budget amount to about BGN 650 million per year. With regard to the trafficking and sale of narcotics, the analysis shows an impressive increase in cannabis trade, which is currently positioned as the main pillar of drug trade. The Bulgarian cannabis market turnover has expanded from BGN 41.4 – 92.6 million in 2008 to BGN 63.4 – 142 million.

Participants in the round table emphasized the benefits of BOCTA, as well as the possible extension of its scope to include some less studied, yet problematic criminal markets.

Senior Commissioner Rumen Ganev, Director of the Internal Security Directorate at the Ministry of Interior, joined the debate to address the problems related to illegal logging. He emphasized that illegal logging leads to serious social problems in certain regions of the country and even though it does not seem to be a significant market in terms of financial damages, it is proportionate to human smuggling. Commissioner Ganev also noted that investigation of illegal trade in fuels remains a major challenge.

Petar Tsankov, Head of Department at the National Revenue Agency, supported the opinion that the illegal logging market is being underestimated. With reference to the available data concerning the illegal fuel market, Mr. Tsankov underlined that further research is necessary and it is important to maintain the monitoring process.

Kamelia Dimitrova, Secretary General of the National Commission for Combating Trafficking in Human Beings, observed that the data presented in the BOCTA report corresponds to the data published by Europol. She informed the round table participants that Bulgaria will host a meeting dedicated to the role of the Internet and social networks as an intermediary tool in human trafficking, and the measures which need to be taken to minimize this illegal market.

Zlatka Padinkova, Chief Inspector at the National Police, agreed with the findings of the report which define the telephone fraud market as a relatively small, yet significant one. She commented on the fact that a major part of phone scams are committed through calls made from Romania or with Romanian SIM cards, where there is no legal obligation for SIM card buyers to register. In addition, phone fraudsters often change their whereabouts, which impedes investigation. 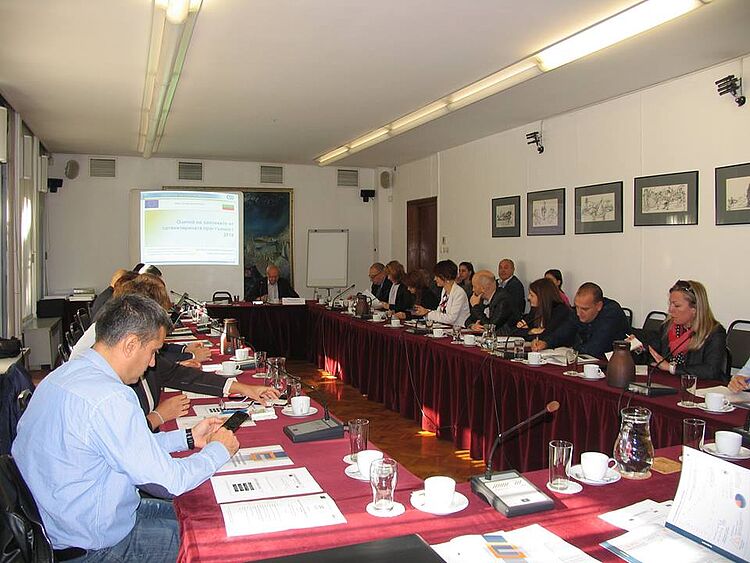