Dr. Shentov welcomed the delegation and opened the discussion by highlighting the increasing importance of political and economic relations between China and Bulgaria. Stating that corruption continues to be a major social and political issue in both countries, he drew the attention to the innovative Monitoring Anticorruption Policy Implementation (MACPI) tool developed by CSD that evaluates the effectiveness of anti-corruption measures at public institutions. He emphasized on the positive reception that this new tool has received from the European Commission as a result of its implementation in various Bulgarian ministries, municipalities and Italian public administrations. He also briefly introduced CSD’s Anti-corruption Reloaded report, which assesses the state of corruption as well as the effectiveness of anti-corruption practices implemented in Southeast Europe on government level.

Dr. Emil Tsenkov brought into focus the geopolitical importance of Bulgaria in the context of the “One Belt, One Road” initiative. Describing the country as a bridge between Europe and Asia, he stressed on a number of geopolitical advantages whose importance is expected to grow to an even greater extent in the future especially from the standpoint of attracting foreign investments. He also highlighted the unique balance between Russia and Turkey that Bulgaria successfully manages to achieve as part of its foreign policy agenda.

Mr. Zhou Wenzhong showed great appreciation for the invitation and spoke on the importance of future connectivity and cooperation opportunities between China, Bulgaria and the rest of Central and Eastern Europe in the frame of the “One Belt, One Road” initiative. According to him both Bulgaria and China share common views and areas of interest, which leaves the door for future collaboration wide open and requires the dialogue between the countries to continue not only on governmental level but on business level as well. He also stressed on the increasing challenge that China is facing with regard to corruption and highlighted several anti-corruption practices that are being successfully implemented in both countries. Mr. Wenzhong also emphasized on the efforts of the Communist Party of China (CPC) as being the leading pillar in the country’s current anti-corruption drive. 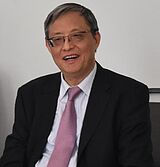