The principles of good governance continue to face challenges in the region of Southeast Europe. The war in Ukraine has starkly demonstrated that closing governance gaps is critical to economic development, national security and resilience vis-à-vis external authoritarian threats. The new EU member states and candidates from the region are among the largest net recipients of EU funding. Yet, democratic backsliding and corruption continue to haunt their societies, and to reduce the internal cohesion and strength of the EU.

The policy forum held on 7 June 2022 in Zagreb discussed how the anti-corruption fatigue and entrenched state capture networks can be effectively counteracted. Among the keynote speakers and panelists were Daniel Freund, Member of the European Parliament, Group of the Greens/Europe Free Alliance, Ognian Zlatev, Head of the European Commission Representation in Croatia, Haakon Blankenborg, Ambassador of Norway in Croatia, Guilio Venneri, Team Leader at the Thematic Support Unit – Rule of Law at the European Commission’s Directorate-General for Neighbourhood and Enlargement Negotiations, and Constantine Palicarsky, Head of UNODC Programme Office in Serbia.

Members of the Regional Good Governance Public-Private Partnership Platform (R2G4P) presented their first SEE Good Governance Report which focuses on two of the most challenging governance vulnerabilities in the region: the integrity of the public procurement systems and the management of the energy sector. The panelists agreed that the levels of corruption and rent-seeking rise in times of crisis. The lack of trust in public institutions has led to low rates of vaccination against COVID-19, while at the same time some companies have benefited by monopolising the procurement contracts in the medical sector. According to the SEE Good Governance Report, a mere five companies in Bulgaria have been awarded 70% of the additional government expenditure, which increased due to the pandemic. High inflation rates would also result in larger procurement amounts, thus presenting yet another red-flag for potential corruption.

Policy-makers and civil society actors at the national and EU level have been seeking solutions to these phenomena. The Enlargement process in particular has provided grounds for self-reflection on how to streamline the anti-corruption efforts in the EU. The latter included strengthened EU conditionalities (as showcased by the freezing of funds procedure launched against Hungary), and the establishment of the European Public Prosecutor's Office (EPPO). In 2022, the Rule of Law Report will include for the first time specific policy recommendations for each EU Member State. There are already a number of good practices in this respect at the national level. In Romania, the PREVENT system checks for links between procurement bidders and warns against potential conflicts of interest, while the e-DAI platform has introduced electronic submission of asset and conflict of interest declarations in May 2021. In Croatia, the asset and conflict of interest declarations have been connected to state registers, sanctions have been made stricter, human resources at state authorities have been strengthened, and whistle-blowers have been awarded the right to legal aid .

The Policy Forum highlighted the need for enhancing corruption prevention through early detection of governance vulnerabilities. Participants suggested the use of SELDI’s Corruption Monitoring System, the State Capture Assessment Diagnostics, Opentender.eu, the Balkan Barometer published by the Regional Cooperation Council, as well as peer review global instruments such as the UN Convention against Corruption. Experts also undelined the need for bringing procurement rules to their stricter pre-COVID state, and for scrutinising all high-value investments and infrastructure projects for “hidden clauses”, as well as performing cost-benefit and environmental analysis. 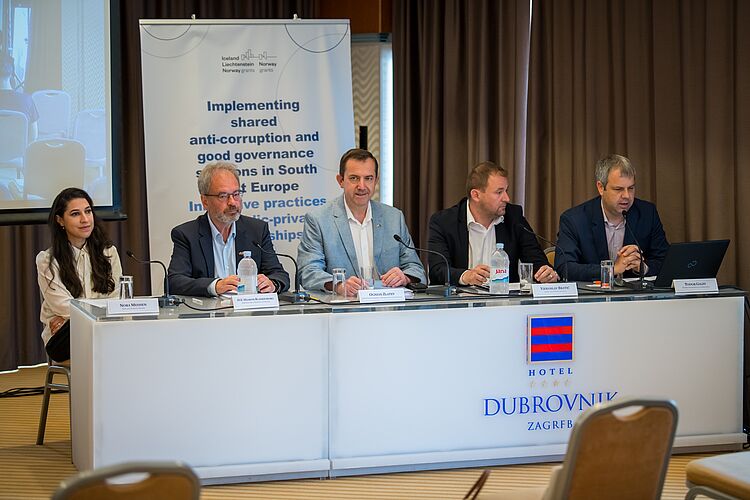