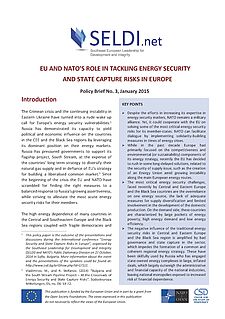 The policy brief analyses the negative influence of the traditional energy security risks in Central and Eastern Europe and the Black Sea region, which is amplified by bad governance and state capture in the sector, and impedes the formation of a common and coherent regional energy strategy.

The authors note that the Crimean crisis and the continuing instability in Eastern Ukraine have turned into a rude wake up call for Europe’s energy security vulnerabilities. Russia has demonstrated its capacity to yield political and economic influence on the countries in the CEE and the Black Sea regions by leveraging its dominant position on their energy markets. Russia has pressured governments to support its flagship project, South Stream, at the expense of the countries’ long-term strategy to diversify their natural gas supply and in defiance of EU’s strategy for building a liberalised common market. Since the beginning of the crisis the EU and NATO have scrambled for finding the right measures to a balanced response to Russia’s growing assertiveness, while striving to alleviate the most acute energy security risks for their members.