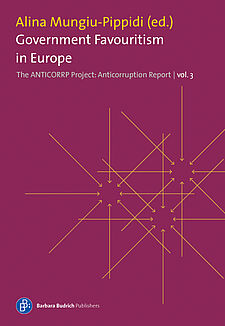 A new study of the Center for the Study of Democracy finds that public procurement in Bulgaria remains trapped in the wider governance problems of the country, which still display the main features of a particularistic regime. This research is part of the third volume of the “The Anticorruption Report” policy series: Government Favouritism in Europe, produced in the framework of the EU FP7 ANTICORRP project. The volume reunites the fieldwork of 2014-2015 in the ANTICORRP and is entirely based on objective indicators, offering both quantitative and qualitative assessments of the linkage between political corruption and organised crime using statistics on spending, procurement contract data and judicial data.

Furthermore, the implementation of the Bulgarian legal public procurement framework remains haphazard and riddled with corruption risks, while changes in the legislation remain frequent. Limitations exist in terms of capacity and effectiveness of the controlling authorities of the procurement system. Detected violations are also high, hinting at the lack of proper preventive capacity.