The war in Ukraine and Russia’s protracted lack of military victory has forced the Kremlin to rely more and more on its most powerful geopolitical weapon – gas – to undermine Europe’s unity in responding to the aggression. Gazprom has been cutting gas supply to a growing number of EU member states in an effort to destabilize “unfriendly” governments and deter the EU from taking a firmer stance, especially when it comes to sanctions. This has, however, come at a great cost – Gazprom’s reputation as a reliable supplier is crumbling fast. The misinformation tricks and lies it employs to save face are growing ever more brazen. The latest sham is related to the allegedly technical reasons for the sharp reduction of gas flows via Nord Stream 1.

Gazprom has gradually cut gas flows through the Nord Stream 1 pipeline, which runs under the Baltic Sea to Germany, first to 60% of its nameplate capacity, then 40% and most recently to just 20%. While Gazprom claims that the reason for the cut-back is a malfunction of a compressor turbine, while another one was stuck in transit in Germany after maintenance. In reality, however, there are six other operational turbines on site that are more than enough to support 100% utilization of Nord Stream 1. If that’s not enough, there is also plentiful alternative pipeline capacity readily available to Gazprom through Ukraine and Poland, if only its true intentions were to deliver the contracted gas volumes.

Nord Stream 1’s two 48-inch parallel strings  are served by one compressor station – the by now infamous Portovaya located near Vyborg on Russia’s Baltic coast.  The station has eight compressor units, six of which are rated at 52 MW and two at 27 MW, to a total installed capacity of 366 MW.

So, the Russian claim boils down to the following: taking out two turbines (out of the eight) limits the flow to 20% of the pipeline’s capacity. Really?

A technical check based on first principles of pipeline engineering and compressor station design will reveal that the absorbed power needed to achieve 100% of the design capacity of the Nord Stream 1 line at the Portovaya CS would be ca. 220 MW or about 60% of the installed capacity. This means that using four out of the six 52 MW turbines available at Portovaya CS will allow the line to be charged at 100% of design capacity – not 40%, not 20%, but 100%.Not to even mention that there would still be two 27 MW turbines available in a stand-by mode.[1]

It does not come as a surprise that the CEO of Wintershall DEA, a company that owns a 15.5% stake in Nord Stream 1, had some comments to share: “Over the last couple of weeks, Gazprom, with the reductions and disruptions of supply, has destroyed the trust in Russia as a reliable supplier of energy for Europe… A trust that has been built over decades, and that is a very depressing news I have to say."[2]

To top this up, behind all the noise about Nord Stream 1, no one is questioning the (at least) 35 mcm per day of unused gas transit capacity that Gazprom has available to it through Ukraine. This is the part of the 77 mcm per day transit capacity, which Gazprom has already booked via the Sudzha route, which remains unused (but paid for). There is also 90mcm per day of idle capacity via the Yamal pipeline through Poland. This is more than enough to compensate fully the “unavailable” capacity of Nord Stream 1 at no additional cost - if only Gazprom had the will to do so, which it clear does not.

Russia cannot be trusted anymore as a supplier of energy to Europe. And the only way to avoid being open to energy blackmail in the future is to have a robust energy security strategy and the necessary governance tools to act on the blackmail. Demand-side actions such as those foreseen in the “Save gas for safe winter” plan do help. Increasing domestic energy supply and enhancing international energy supply help, too. But making sure that the impact on the economy and the consumer is avoided or minimized matters the most.

Europe needs to prepare for a worst-case scenario of a complete gas cut-off from Russia. Solidarity is the most powerful tool at its disposal, which is why Russia is using all of its power and trickery to undermine it by inducing asymmetric positions of member states. To counter these efforts, Europe needs to address the major shortcomings of its internal gas market – interconnectedness and better management of regional gas flows.

[1]How to Deal with Kremlin’s Desire to Starve Europe of Energy The Case of Nord Stream 1 and Beyond, CSD, 2022 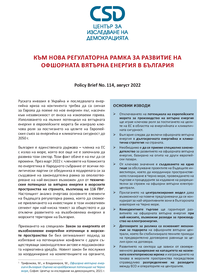