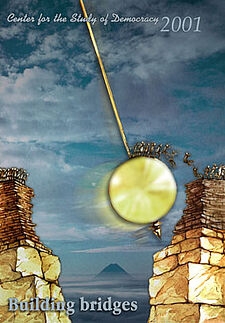 One of the key missions of a think tank in a country in transition is to anticipate the rising challenges to society and to work with the stakeholders to develop and advocate solutions. National and global developments in 2001 – some of them unfortunately tragic – have shown that CSD is addressing issues that are at the forefront of the Bulgarian and international agenda. In particular, these include coalition building in anti-corruption and the impact of the new soft security risks on democracy and the rule of law.

For Bulgaria, 2001 was the year of parliamentary elections that brought to power a new coalition government. One of its main stated intentions was to prioritize anticorruption in its reform policies. This came at a time when CSD, and its partners under Coalition 2000, had built up a significant capacity in establishing partnerships among public and non-governmental institutions in the various areas of combating corruption – monitoring, awareness, legislative and judicial reforms, etc. For almost four years, the Center has been advocating that integrity and good governance are the keys to successful reforms, and that rooting out corruption could only be achieved by combining commitment at the policy level, participation and watchdog at the civic, and international assistance which supports both. Time has vindicated this vision and the coalition building approach – particularly in anti-corruption – is now widely appreciated internationally. It is also growingly accepted as indispensable by politicians and foreign development agencies in Bulgaria as well.