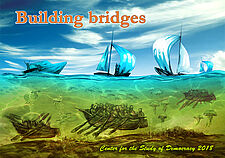 The 25th Annual Report of the Center for the Study of Democracy (CSD) contains the key issues we work on, our achievements, our human, financial and organizational resources, and the main challenges we look forward to. CSD’s Annual Reports, the first of which was published in 1994 (shortly after the Center was established in late 1989), are meant to set an example of the openness and transparency we expect from public institutions. There is no other effective way to ensure social change and institutional reforms. And we are happy that others take note. For a fourth year in a row, CSD has been among the think-tanks awarded the top global rating for financial transparency among the 150+ major organizations from 47 countries ranked by Transparify.org.

In CSD’s best traditions, the poster on the cover of this Annual Report tries to capture the spirit of the year. The year 2018 revealed starkly how Europe and the whole world are moving in different gears, amid strengthening of populism and illiberalism at the expense of the classical forms of liberal democracy. The growing rift between reformers and the status quo among EU Member States and within countries has undermined trust in institutions and eroded their efficiency to serve their citizens and deal with crises. This has become most obvious by the self-centered approach in tackling migration pressures, the Eurozone reform, and Russia’s malign influence in Europe. At the same time, democratic backsliding has dealt a major blow on the prospects for economic and political convergence in Europe, especially in its southeastern corner.

In this environment, CSD goes back to its basics and aims to give its best to promote social change and better governance. We have witnessed how the governance gaps and deficits, including state capture in some countries, that have cracked open by the strains of the economic downturn or that have persisted because of the lack of political will and action have been exploited by authoritarian regimes and forces to the detriment of democratic practices. Civil society plays a crucial role in building resilience against these threats to democracy. Striving for and promoting full transparency is one of the most important instruments at its disposal. CSD will continue to lead the way there.