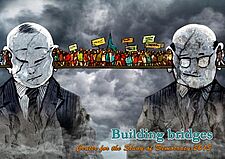 “Bridges”, Nobel laureate Ivo Andrić wrote, “show the place where humankind encountered an obstacle and did not stop before it.” The Center for the Study of Democracy was created 25 years ago, at a time when a major international rupture started to be bridged. The 1990s, however, saw the great East-West divide that defined the post-war period fractured into a multitude of smaller gaps – each easier to straddle yet formidable because of their sheer number.

From the very beginning, CSD assumed a daunting task – to reconcile the process of adoption in Bulgaria of the best international standards of public governance with the inertia of the social and institutional environment in the country. This required the skill of bringing together foreign partners – individual governments, international organizations, donor agencies, think tanks – with local allies – reformist politicians, civil society organizations, the budding business community. Whether hosting the Council of Europe and the American Bar Association’s Central and East European Law Initiative, or working with the U.S. Agency for International Development and Norway’s development assistance mechanism, the Center helped international partners navigate the Bulgarian social and political landscape while assisting national institutions in their adaptation to new concepts and modes of operation. Building on that experience, CSD has also led a regional initiative in Southeast Europe which promotes good governance in the context of EU integration.

Reforms require the dislocation of entrenched – and often corrupt – interests. Recognizing that only an alliance could be up to this task, CSD sought to build public-private platforms in all its reform projects. When the Center advanced the idea of NGOs engaging government and business allies for transforming practices, laws or institutions in Bulgaria, it met with initial skepticism – the mistrust between civil society and government had been considerable. Through CSD’s leadership, however, it is now widely acknowledged that such partnerships are neither a form of collusion nor of confrontation but of ‘constructive engagement’. Thus, the Center has managed to get this public-private partnership model to deliver results in fields as diverse as fighting corruption and establishing the ombudsman institution.

A bridge that has been particularly difficult to build – but, consequently, rewarding when achieved – has been the one between contemplation and action. Being a ‘think’ as well as an ‘action’ tank, the Center has made some of its most momentous impacts by converting research findings into policy recommendations. Throughout the years, CSD generated specialized knowledge in a number of fields – law, economics, security, social inclusion – and translated that knowledge into policy options. By combining scholarly excellence with impact orientation, the Center has managed to introduce evidence-based policy making to Bulgaria, especially in fields such as good governance, security and energy.

Divides had to be bridged also within the knowledge community. Providing actionable analysis in areas that had fairly recently come into the policy focus –  corruption measurement, organized crime, energy security – required devising of innovative methods and analytical tools. By blending, for example, criminological research with market analysis CSD contributed to a breakthrough in government policy on illegal cross-border trade.

The track record established by way of this constructive approach has made CSD a creditable partner in collaborative international work in the European Union and beyond.