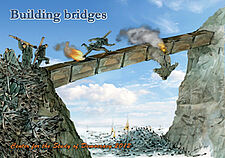 On the background of the continuing economic uncertainty and the unprecedented challenges facing the European Union, Bulgaria was seen as an island of stability in the region of southeast Europe in 2012. Still, several major challenges remain for the country’s democratic progress, such as high corruption, hidden economy and organised crime, low respect for human rights and the rule of law, high energy dependency and low competitiveness. These have compounded low incomes and high unemployment. The Center for the Study of Democracy helped relieve these challenges by remaining true to its philosophy of building bridges through combining innovative academic research with policy-oriented output.

In 2012, CSD continued building its reputation as a leading European think-tank. All CSD actions had a well-defined European dimension, either through participation in international networks, such as the Rights, Equality and Diversity (RED) Network dedicated to monitoring of racism and xenophobia, or through development of analytic reports and policy recommendations on topics of European interest, such as the EU anti-corruption policies, the modernisation of the criminal justice systems in Europe, or the integration of migrants and other vulnerable groups.

An indicator of the Center’s academic excellence is the increasing number of European researchers who collaborate with the Center on a regular basis. In 2012, over 30 international experts from the academic, political and business communities delivered talks and seminars at events organised by CSD. The internship program of CSD attracted a record number of young researchers from the UK, the Netherlands, France, Germany, the United States and Bulgaria who contributed to the work of various CSD teams.

CSD completed the first of its kind for Bulgaria Serious and Organised Crime Threat Assessment 2010 – 2011. It estimated the annual turnover of the 12 criminal markets presenting the highest risks for the Bulgarian society at €1.8b. It was a pilot of EUwide efforts to assess the levels and scope of criminal threats to the Member States and to formulate the political and operational priorities in countering organised crime. Although focused on the Bulgarian organised crime, the assessment was a truly international effort, benefiting from the experience and methodological expertise of a number of EU and international law enforcement partners: the UK Serious and Organised Crime Agency (SOCA), the National Police Services Agency of the Netherlands, the Federal Judicial Police of Belgium, the Criminal Police of North-Rhine Westphalia, the Swedish Customs, Europol and the United Nations Office on Drugs and Crime (UNODC). The assessment was the result of an extensive and long term partnership with Bulgarian government bodies: a collaboration, which is unique in the sensitive area of security sector reform.

CSD contributed to EU efforts for improving criminal justice systems in Europe with the development of Justice Sector Institutional Indicators for Criminal Case Management. This policy instrument and the results of its implementation were presented at a Public Hearing at the European Parliament. Adapting to the changing character of crime, in 2012 CSD’s legal research targeted two newly emerging forms of criminal activity: cybercrime and environmental crime.

CSD continued to monitor racism and xenophobia as part of the Rights, Equality and Diversity (RED) Network, as well as to work on the improvement of the penitentiary system and the situation of children victims of trafficking. It published a report on the right of defense in Bulgarian criminal proceedings and completed the first update of the factsheets on rights of victims of crime in criminal proceedings prepared for and uploaded on the European e-Justice Portal.

CSD developed methods and indicators for the assessment of European policies for the integration of migrants and other vulnerable groups in European societies. They will be applied by national and European agencies in order to improve fact-based policy-making. Widening its research focus, CSD reviewed the reintegration in society of child victims of trafficking in both source and destination countries and focused on the causes of destitution and homelessness among migrants.

CSD became part of the EU Anti-Corruption Networks of Local Correspondents for the preparation of the first EU-27 Anti-Corruption Report in 2013. For over a decade, CSD has been advocating for the establishment of such a report. The selection of CSD as partner in the regional information seminar, organised by DG Home of the European Commission in Sofia in December 2012, was a recognition of CSD’s sustained involvement in shaping national and European anti-corruption policies. CSD published also its regular annual national Corruption Assessment Report.

CSD published two reports on the key governance issues of the Bulgarian energy sector – green economy growth and gas transparency. The reports outlined the necessary policy measures for transitioning towards sustainable development and provided recommendations for improving the governance and transparency of the Bulgarian energy sector. The Center provided the Bulgarian authorities with further insight to help tackle competitiveness shortages. It published its annual Hidden Economy Index, which showed overall improvement in the hidden economy, but still a worrying upside trend in envelope wages and informal (subsistence) employment. CSD presented an updated Strategy for the Establishment of a Central Electronic Register of Legal Persons and an Electronic Registries Center of Republic of Bulgaria, preparing the ground for ushering the country into the era of big-data policy decision-making and transparency.

As part of the European Commission’s Expert Evaluation Network for monitoring the effects of the EU funds on member-states’ economies, CSD prepared the annual assessment on the achievements of the Cohesion Policy in Bulgaria in 2012. In addition, CSD completed a thematic review of the EU-funded financial engineering instruments available in Bulgaria.