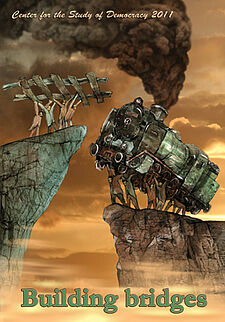 The continuing global economic rebalancing increased uncertainty and made everyone rethink the way they do business. In Europe, the cradle of the crisis in 2011, national leaders continued to scramble to come up with solutions for moving the Eurozone and the enlarged union forward. Bulgaria, the only EU country to have its credit rating increased in 2011, has boasted macroeconomic and fiscal stability; yet, the issues of reversing oligarchic state capture, and improving the status of EU’s poorest nation, are getting even more urgent. These turbulent times have reinforced the cause for a common sense, fact-based approach to social innovation, which the Center for the Study of Democracy has embraced since its founding in late 1989. With 16 publications, reports and policy briefs along with 34 local and international events and numerous media appearances, in 2011 CSD continued to advance on its mission of building bridges between academics and policy makers by way of research, advocacy and awareness-raising.

The year 2011 marked important policy changes aided by CSD both domestically and abroad. CSD energy research and advocacy helped the Bulgarian government strengthen energy security by edging a further bit away from megalomaniac, and corruption-infested projects towards energy efficiency and renewable solutions. The best international expertise on sustainable development and good governance were made available to the Bulgarian public thanks to CSD efforts. The Center carried on its pro-active work in cooperation with law-enforcement and compliance control agencies to tackle corruption and organized crime, increase police responsiveness, reduce conventional crime and limit the negative impact of hidden economy, still without harming the crisis-hit legitimate business and national competitiveness. CSD channeled to Bulgaria valuable expertise on counteracting organized crime, managing asset forfeiture and reforming the prison system. This will help the Bulgarian government to release in 2012 the first national organized crime threat assessment in a unique public-private partnership format.

In Europe, we have seen the European Commission making advancement towards developing a common EU anti-corruption monitoring instrument for which CSD has been advocating for over a decade. With CSD participation a European survey instrument was piloted, which is meant to measure public trust in justice and strengthen civic oversight on the performance of law enforcement and the judiciary. In response to the rapidly changing migration realities, CSD performed an assesment on educational integration of refugee and asylum-seeking children in Bulgaria and continued its efforts to promote measurable and sustainable migrant integration policies. It also contributed to facilitating the transfer of good practices within EU in the field of migrant and child-victims of trafficking integration. Furthermore, CSD provided valuable insights to the Bulgarian and European politicians on the Arab Spring events and the possible future paths of transition.